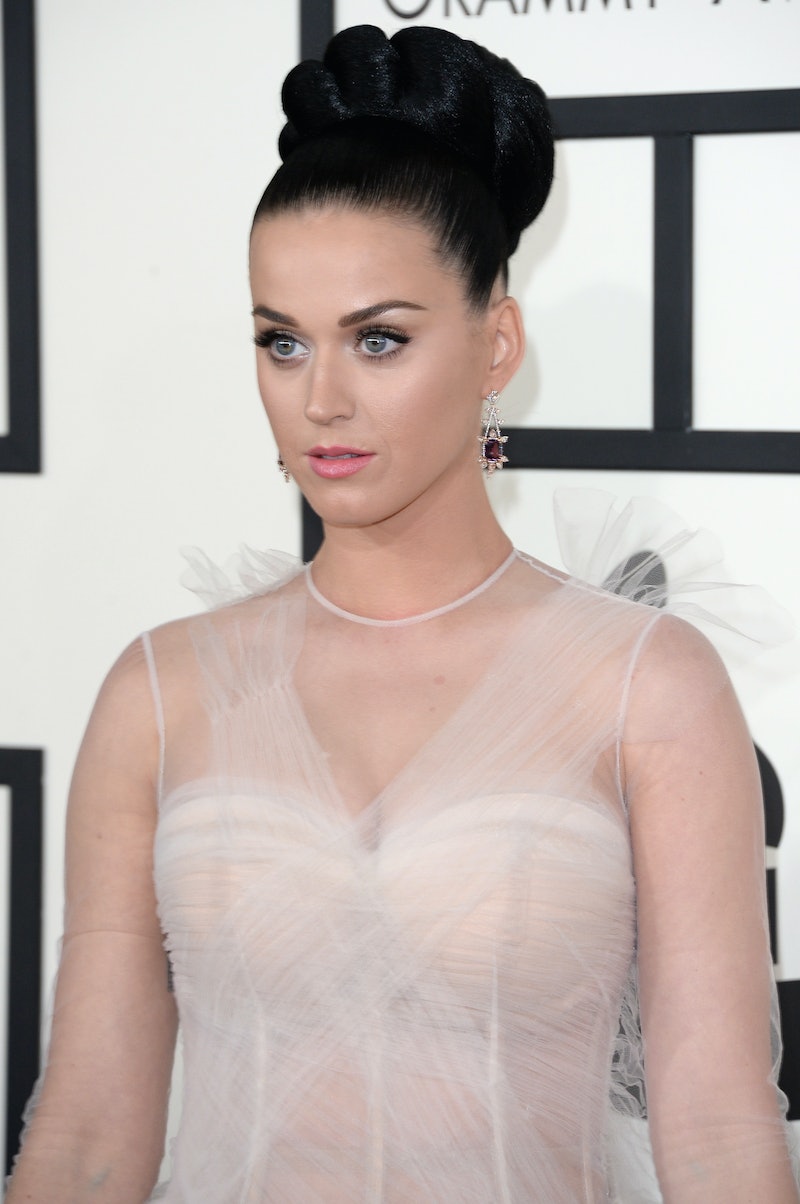 Katy Perry tried to honor the Beatles last night, but instead just made a lot of their fans angry. She performed Paul McCartney's song "Yesterday" at the Grammys' tribute to the Beatles' 50th anniversary of coming to America. Many fans were already incensed that the likes of Perry was considered to honor such a legendary band, but things went from bad to worse when Perry changed the pronouns in the famous song so she was singing to a man instead.

"Why'd he have to go? I don't know, he wouldn't say," she sang, substituting "he" for McCartney's original female pronouns. Tackling the famous song would likely have brought on negativity even if she'd have left it as it was; people were less-than-thrilled with her performance. "I used to like Katy Perry. Right up until the moment she destroyed "Yesterday,'" Dave Lavery said on Twitter. But for many fans, changing Sir McCartney's lyrics was unforgivable. "Major eye roll to Katy Perry for changing the pronouns in her cover right now," said one Twitter user. "Why do they need to change the gender of the lyrics? A pet peeve of mine," said another.

Perry likely meant no harm when she switched the lyrics out, in the past she's listed the Beatles as a major influence on her own career. "[The White Album was] the only thing I listened to for probably two years straight," she told Interview Magazine in 2012. But despite her positive feelings towards the band and their music, she still felt the need to rewrite one of their most popular songs to fit her own gender, as though she was somehow afraid of sounding gay when she sung.

"Katy Perry just 'No Homo'd' Yesterday," said an unamused Beatles fan on Tumblr. Another Tumblr user pointed out how Perry was all fine with singing a song about bisexuality one second with her hit "I Kissed a Girl" but now it seems she feels the need to make sure everyone knew she likes boys. This weird double-standard is what seemed to upset fans even more than her participation in the show. "I already wasn’t a fan of Katy Perry singing “Yesterday” but I was going to give it a chance. Then she changed the words to a girls point of view and that’s one of my biggest pet peeves," said another Tumblr user.

Perry isn't the first one who's changed the pronouns in songs they cover, it's something that's been done in mainstream music culture for way too long. In an episode of Glee, Gwyneth Paltrow's character sings Cee-Lo's "Forget You" and changes the words to "I see you driving 'round town with the guy I love." And in Sheryl Crow's cover of Guns 'n Roses' "Sweet Child 'O Mine" she changes the "she" mentions to "he" throughout the song.

Why do all these famous singers feel the need to reassure the audience of their sexuality? For most of them, we already know whether they're gay or straight, but even if we didn't, it doesn't matter. We're not going to hear Katy Perry cover a Beatles song the normal way and suddenly decree that she's a lesbian because she was singing to a girl. The Beatles' fans outrage at this lyric change is totally legitimate, and Perry as a self-procliamed LGBTQ supporter should be less concerned about her "straight" image. After all, it's not her song, and it's not supposed to be sung from her point of view.

More like this
Harry Styles Helped A Fan Come Out As Gay In Dramatic Fashion At His London Show
By Jake Viswanath
J.Lo Uses They/Them Pronouns To Introduce Her Child Emme For A Special Duet
By Jake Viswanath
Tove Lo Wants A Safer World
By Sam Ramsden
Watch Harry Styles’ Sweet Reunion With His Primary School Teacher
By El Hunt
Get Even More From Bustle — Sign Up For The Newsletter