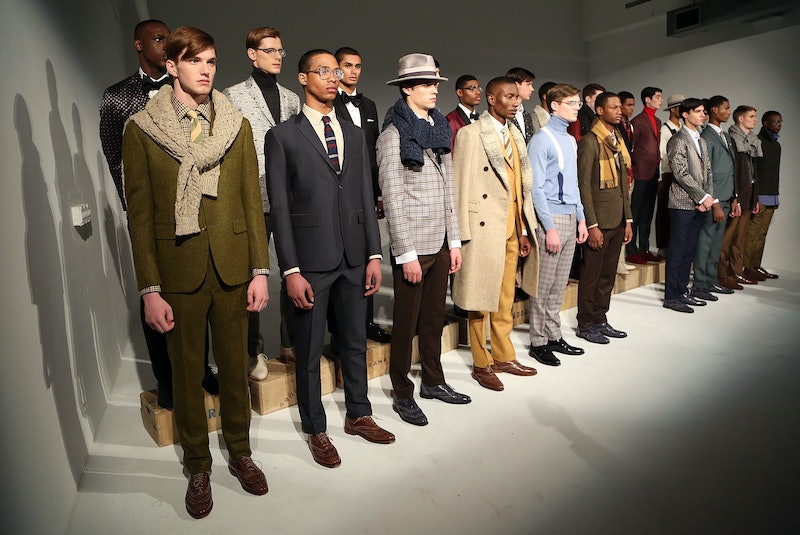 For the last five days, Fashion Week has overtaken New York City as America's top designers present what's new for the upcoming fall season. But it's not just womenswear turning heads, according to some. A major change in the way men view style is positioning the menswear market for major growth.

In an interview with Pacific Standard magazine, Jesse Thorn, founder of men’s fashion podcast Put This On, argues that the recent recession has had a huge impact on how men see style. According to Thorne, the men's market "renaissance" was prompted by the post-boomer generation’s acceptance of stylish dressing and complimented by men's post-recession focus on craftsmanship and quality.

In 2012, WWD reported that men's view of the shopping experience has shifted, as well. Marshal Cohen of The NPD Group explains that men are seeing the shopping experience as a recreational activity as opposed to a necessary evil, "Men are socially shopping, and it's part of their leisure activity. It's not a chore." He goes on to say stores should see this as an opportunity to attract male customers through unconventional perks, "So maybe stores do need to have monitors up on Sunday so they can watch the football games, and wine tastings to meet women."

The industry has reportedly gotten wise to male consumer's increased interest in fashion, as demonstrated by four recent trends and events in the fashion world:

Larger retailers and even design houses have taken notice and are expanding their men’s products and services, too. Newly minted billionaire Michael Kors has plans to expand his menswear line in 2014, and Canadian luxury retailer Holt Renfrew just recently confirmed it is opening a men's only boutique.

Plans for New York Men's Fashion WeekIn response to the rising interest in American menswear, industry insiders, including Council of Fashion Designers of America CEO Steven Kolb and former Bergdorf Goodman fashion director Michael Bastian, began planning a New York Men’s Fashion Week. The event would be a part of the international men’s fashion calendar and serve as a showcase of American men’s design. The project, originally slated for July 2014, has stalled due to lack of sufficient sponsorships, but the fact that major players like the CFDA are taking interest says a lot about the perceived viability of the event.

Menswear line Public School wins CFDA/Vogue Fashion Fund AwardDesigners Dao-Yi Chow and Maxwell Osborne of Public School, a menswear brand based in NYC, are the most recent winners of the CFDA/Vogue Fashion Fund Award, one of the most prestigious and lucrative ($300,000) awards bestowed on emerging designers. If I've learned anything from watching Ovation TV's The Fashion Fund series, it is that finalists, like Alexander Wang and Prabal Gurung, win not only because of their talent, but also their bankability. The fact that a menswear line is the newest recipient says power players like Diane von Furstenberg, Anna Wintour, and Ken Downing, Neiman Marcus Senior VP & Fashion Director think menswear has real staying power.

A new class of male supermodelsNot since the days of Tyson Beckford and Marcus Schenkenberg has the title of supermodel been bestowed on a man. Details magazine’s March cover features ten male models it predicts will become the supermodels of their time. The magazine attributes the increased popularity of male models to the rise of fashion-conscious male shoppers, the exposure social media provides (both Kate Upton and Cara Delevingne used social to grow their community, then parleyed their massive fan base into a successful modeling career), and an increase in the number of major campaigns starring male models. Here's hoping for more of these gentleman in all our lives.

It is not clear if menswear is just having a moment or if it is poised to take its place alongside womenswear as a major fashion industry. But for now, we are just going to enjoy the view.

More like this
Kim Kardashian Is “Disgusted & Outraged” By Balenciaga Ads
By El Hunt
Google Wants You To Shop Black-Owned The Friday After Thanksgiving
By Dominique Norman
Here Are All 703 Outfits Rachel Wore On Friends
By Kat George
Behold: The Wildest Fashion Moments of 2022
By Dominique Norman
Get Even More From Bustle — Sign Up For The Newsletter