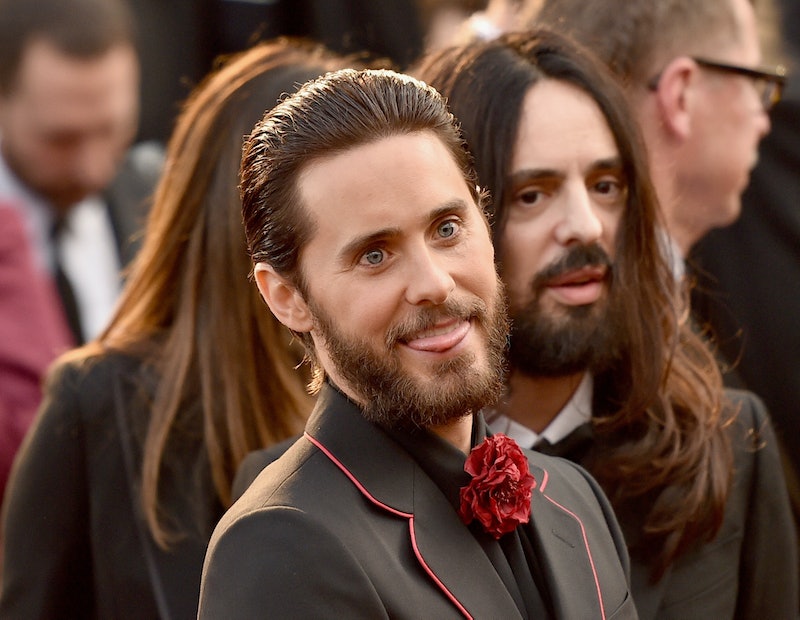 Jared Leto really knows his way around a Snapchat filter. Over the weekend, the 30 Seconds To Mars bandmate and actor teased eagerly awaiting Suicide Squad fans with a creepy Snapchat of him as the Joker, using the Suicide Squad filter. While the short video is clearly meant as a joke, comic-loving fans everywhere are trying to pull as much meaning from the snap as possible. And can you blame them? Leto has big shoes to fill for this difficult role, as Heath Ledger's work as the Joker in Christopher Nolan's The Dark Knight earned him a posthumous Oscar. And before Ledger, Jack Nicholson gave a commendable performance in Tim Burton's Batman. The role of the Joker is an iconic one, and expectations for Leto are sky-high.

The actor is aware of the gravity of his role, having said in an interview with Entertainment Weekly recently, "The work that’s been done on this character by so many people before me has been so impactful, so incredible, so much fun, so profound, so risky, that it’s a very special thing to be asked to take on that responsibility." But this new Snap shows that this doesn't mean Leto's not willing to have a little fun with the part, which, if you think about it, is exactly what the Joker would do — though in a decidedly more psychotic way.

But what's going on with that beard?! If it's for the movie, that'd be strange; the Joker hasn't ever had a beard before, just a mustache, at most. But in all likelihood, Leto's facial hair is not for the film but just for his own life. Don't worry, superfans — Leto's Joker isn't likely to bring on that many changes.

Whatever happens with Suicide Squad, this snap proves one big thing — that Leto's haunting blue eyes are definitely going to contribute to his creepy factor in the movie. Now fans just have to wait until Aug. 5, 2016 to see how this all plays out.