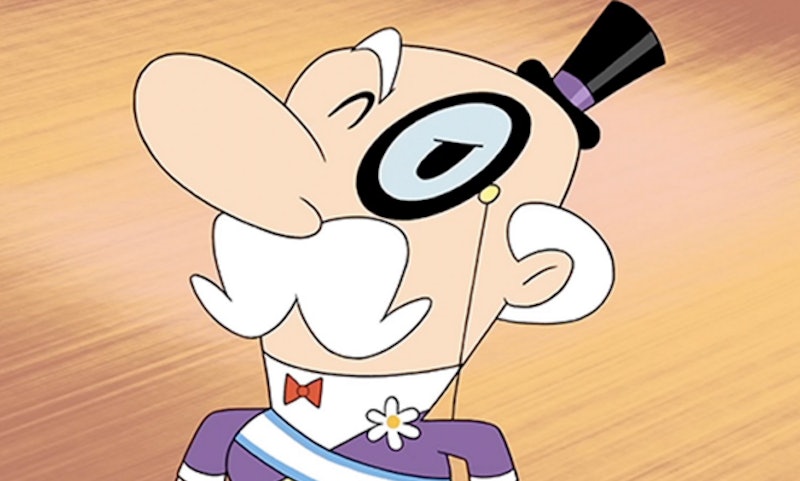 We live in a golden age of revived television shows; it's like no canceled show ever stays dead. This year alone, we saw new episodes of The X-Files and Heroes, a sequel show to Full House, and, now, a reboot of The Powerpuff Girls — and it's only April. But, like with any — excuse the pun — re-animated show, The Powerpuff Girls is coming back a little different. After all, nothing can return and be exactly the same. Some of the voice cast has shuffled out, and some of the originals have returned. And while the characters' voices may change a bit, the true test will come when fans hear the main man behind the series: the narrator. No offense, newbies, but the narrator's voice in the new Powerpuff Girls reboot absolutely has to be the same, or things are going to get weird, fast.

Luckily, fans and purists can breathe a sigh of relief: The new Powerpuff Girls has the same narrator, Tom Kenny. He played the narrator/mayor throughout the series when it initially ran from 1998 to 2005, and he'll return for this new 40-episode run. And it's good for the show that Kenny was available, because the man is a seriously busy voice actor. Chances are, if you've watched a cartoon any time since 1990, you've probably heard his voice before. In addition to City Hall in Townsville, USA, here are some other places you can hear Kenny's voice.

As important as he is, the Mayor of Townsville is not Kenny's most famous role; that would be the angular fellow who lives at Bikini Bottom. Yes, Kenny is also the voice of Spongebob Squarepants, the indomitable yellow sea sponge.

Kenny isn't just a mayor — he's a king. The Ice King on Adventure Time , to be precise. "My approach to the Ice King is that he’s a very real psychopath," Kenny told MTV.

Yep, he's Heffer Wolfe in Rocko's Modern Life, too. Getting the picture? He's a bunch of extremely weird cartoon characters.

Not all of Kenny's voices are for kid shows. On Rick and Morty, Kenny does the voice of Squanchy.

I love the completely underappreciated series, Mission Hill. Kenny was the voice of Wally Langford, half of a gay couple that lived next door to the main characters. According to the commentary track on the DVDs, Wally was part of the first kiss between two male gay characters ever shown on television, which was largely ignored because it was an animated show on a little-watched network.

Kenny was Dog, who sounded kind of similar to the Mayor on Powerpuff Girls, don't you think?