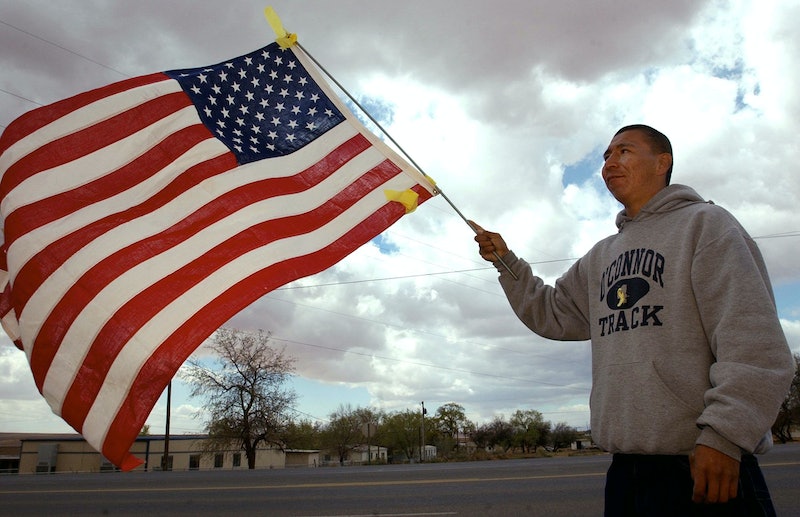 Native Americans are a diverse demographic, with various languages and cultural distinctions defining each tribe. Unfortunately, economic, social, and political struggles transcend the diverse groups within the community. And life on Native American reservations can be especially bleak. According to 2014 statistics from the U.S. Department of Labor, unemployment on Native American reservations was nearly twice that of the national average. Poverty rates were also higher, and educational performance (such as ACT testing scores) were lower. And voting is another challenge faced by a people the government seems destined to fail. And even though most of their fellow Americans may not be aware of it, the problem of Native American disenfranchisement has already played out in this year's presidential primaries.

This year's Arizona primary on March 22 was perhaps proof enough of how voting policies continue to contribute to the disenfranchisement of Native Americans, even if it is done inadvertently. As it is, Native Americans have one of the lowest voter participation rates in the country. In Maricopa County, which is home to five Indian reservations, some voters waited over five hours to cast their ballots. That's because since the 2012 presidential election, Maricopa County closed 140 polling stations, decreasing the total number from 200 to 60.

But why would the county do that? Maricopa's director of the Office of Records said it was done in an effort to save money, but last month's long lines for the primaries have prompted an investigation by the Arizona Secretary of the State. AZ Central reported that hundred of people were still waiting in line when the AP projected Hillary Clinton and Donald Trump as the Arizona winners. The Arizona Secretary of State's office did not respond to Bustle in time for comment.

Even without these polling difficulties, Native Americans in Arizona had other logistical difficulties they had to overcome in order to vote. For example, the Navajo Nation reservation in Arizona, which boasts the country's largest concentrated Native American population, can take four hours to traverse. This makes an errand like driving to the county seat to register to vote or cast an early-voting ballot a journey.

Then there is the issue of voter ID laws, which Erik R. Stegman, executive director of the Center for Native American Youth at the Aspen Institute and a member of the Carry the Kettle First Nation (Assiniboine) tribe, tells Bustle has been a problem since Native Americans first became full citizens in 1924.

“Today, Native Americans still struggle to exercise the right to vote, even in their ancestral homeland,” he says. “In particular, identification laws, which allow tribal government-issued ID cards but require residential information (house numbers, street numbers, etc.) on the card itself, create significant barriers for Native voters, because oftentimes their residences do not have street numbers like the ones used in off-reservation communities.”

Linford Fisher, associate professor of history at Brown University, tells Bustle that tribal IDs are normally all that reservation-dwelling Native Americans need. “Since federally-recognized Native nations (over 560) are technically sovereign entities, many reservation Natives do not even have (nor would they need to have) forms of state ID, such as a driver's license,” he says. “Many Native nations issue their own ID (as sovereign nations do), including international passports (in the case of the Haudenosaunee, or Iroquois).” He describes voter ID laws as “yet another insult and hardship for this land's original inhabitants.”

Stegman and Fisher agree that Native Americans often have trouble obtaining non-tribal IDs due to long distances between their reservations and the towns that issue state identification. Money presents another barrier for many Native people.

“The fees and other costs associated with obtaining state IDs are also prohibitive for many tribal members on reservations, where poverty and unemployment are substantially higher than the national averages,” Stegman says. Add language barriers and what Stegman calls “outright anti-Native discrimination in the large non-Native polling places” to the pile, and it's no surprise that an article in Indian Country Today declared Native Americans “invisible in the polls” in 2012. This year, that sentiment may be truer than ever. Though Stegman says Native American youth are fighting to help their fellow tribe members register and vote in local, state, and national elections, their work is far from done.

Walter C. Fleming, professor of Native American Studies at Montana State University and a member of the Kickapoo Tribe in Kansas, tells Bustle that it's also a problem in Montana, whose primary will take place June 7. “Some counties in Montana have been reluctant to set up satellite polling locations on reservations,” he says, adding:

Because reservations are traditional areas of poverty, that refusal to reach out to Native communities is preventing a more full participation from reservation residence. Some of that may be because Native people tend to vote heavily Democratic.

Fleming adds that he think that blocking the Indian vote to prevent Democratic candidates from winning “may be a motivation for election officials in border towns to try to limit Indian participation.”

When asked to respond to allegations that Montana's voting policies disenfranchise Native Americans, Blair Fjeseth, director of communications at Montana Secretary of State's office, tells Bustle that's not at all the case. She cites the acceptance of tribal IDs as identification, the state's vote-by-mail system, and the secretary of the state's September 2015 directive to counties with reservations, which ordered them to collaborate with tribal governments to open a satellite polling station — but only if the Voting Right Act analysis conducted by the county on the tribal government's request deemed it necessary.

So far, Fjeseth says that eight counties have worked with local tribal governments, and a total of nine satellite polling stations will be opened for the June 7 primary. (But not all counties have cooperated. The Fort Belknap Indian Community may be taking legal action against Blaine County for allegedly refusing to work with them.)

In Fjeseth's emailed statement, she points to another development: "This year, for the 2016 elections, Montana will become one of the first states in the nation to have special early voting (and late registration) offices on the Indian reservations, sometimes known as satellite offices. We are expecting nine such offices across eight counties and five reservations, thus enabling American Indians to get election services on the reservation, rather than having to travel long distances to the county seat for those services."

However, Fisher is adamant in advocating for greater efforts to improve Native American representation at the polls: “We need to do more to include and respect our nation's indigenous population, not exclude them."