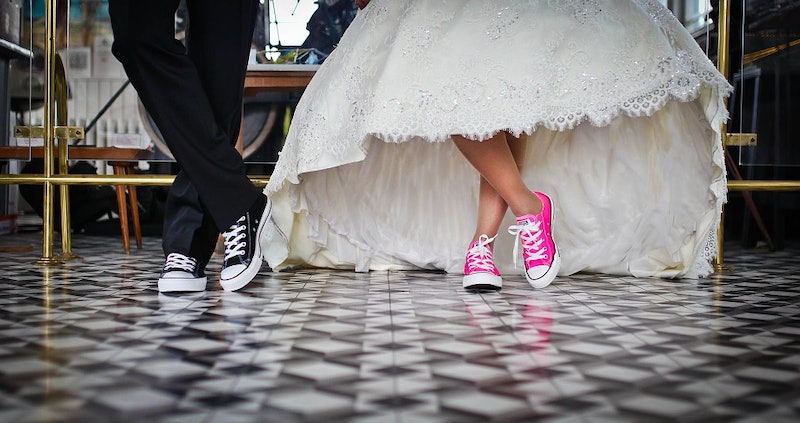 Marriage is weird. I'm just going to say it. No matter how long you've been together, or how well you know each other, getting married changes things, and exposes what you didn't know about your partner. And not just the good stuff. There are weird things every couple should know about each other before getting married, too, because finding out you partner secretly hoards take-out salt packets under their bed is something you might be interested in having a grip on before you begin the task of building a long life together.

I'm not saying these weird things are deal breakers. What I am saying is that during my time as a Domestic Violence Victim Advocate and Planned Parenthood Certified Responsible Sexuality Educator, it was a common occurrence for newlyweds to have this "bubble busted" period where some new bits of information or weird habits emerged that made them question if they really knew each other and even if getting married was a huge mistake. This phase is common, and usually short-lived, but knowing as much as you can about your partner and their weird habits or beliefs beforehand can help you avoid this temporary but serious bout of panic. Or get over it faster should it occur. Plus, if you're going to be together forever, you should probably have a good grip on each other's baggage, right? Getting to the bottom of the following issues before you get married will help you have everything out in the open.

Remember that scene in Sex And The City where the ladies talk about how they don't want to give up their weird habits when they live with someone, like eating jelly on crackers in the kitchen while reading fashion magazines? You should probably know these things about your love so you don't encounter a bit of weirdness shock when you witness them. But also, you want to know when your partner needs space, alone time, or special kinds of support. It's all part of being a good spouse.

2. Which Family Members Are A Little Off

We all love our one weird uncle or our awkward cousin, because we've had years of training in how to deal with them. But before you put both of your families together in the same place, and then become related to pretty much everyone there in blood or by marriage, you should probably know what you're getting in to. Give each other a crash course on all the flirty grandmas and handsy aunts and those cousins who may be secret militia members. You know, that kind of thing. So no one says or does anything that will cause drama or trauma.

If you're at the stage in your relationship where you're ready to get married, you probably know of any current or past addictions your partner battles with. But since shame is a big part of addiction for many people, there may be some things you don't know. Couple that with the fact that many times people replace one addiction with another, and you might have some weird stuff your partner does that you were completely unaware of. Like maybe they replaced their pill addiction with obsessive record collecting. It's important to know these things, otherwise one day you'll throw one of those records away, then scratch your head as to why your partner's world is now upside down.

If you've already been living together, you probably already know all you partner's gross hygiene habits, but if you don't, you should figure out what they are and ease in to the acceptance phase, especially if you have a weak stomach. Maybe they pick scabs, pop pimples, sing while they poop, announce their farts, or clean out their ears with their keys (ow). If your partner has a bunch of these habits that you weren't aware of, it can be overwhelming. You definitely don't want to get into a marriage and have this moment where you think 'I don't know this person as well as I thought." Get everything out on the table, warts and all.

My wife and I have ADHD, so we live and die by routines — otherwise life is just chaos. There are seven very specific steps to her morning routine that must be completed in the same order. — I mean must. If any of these steps gets interfered with, the whole day is a loss. I found this out the hard way when I got up super early to make her breakfast and she wouldn't eat it, which lead to our first fight as a married couple. If she had said "don't mess with my morning routine" I would have been like "bonus, extra sleep for me." Instead, her day was off, and my feelings were hurt. Even if you just like certain things a particular way, and it's not necessarily a mental health issue, but it's important for your happiness, let your partner know.

We were already married before I told my wife about my love of home birth and water birth. She just looked at me like "I'm being Punk'd right?" I will never be able to convince her that this is a good idea, and it's kind of a big deal, should we ever feel ready or willing to have kids. We're a totally liberal, gay, feminist family, but she was raised in a conservative religious family, so sometimes she has these beliefs that make me question her sanity. It's not possible to know everything about each other, but you can poke around a little and find out their stances on the the issues that mean the most to you. Especially if your own beliefs are a little uncommon on controversial.

When you tie the knot, you're now in the strange position of planning someone's death and funeral. Like, that's on you, which is a weird thing to grasp when you're young. I still feel like that's something our parents should handle. But that's not the case. You need to know if your partner wants to be resuscitated, if they want to be on life support, how they feel about surgeries and blood transfusions. What kind of funeral they want. How they want their remains handled. What they want done with all their stuff. And you have to be willing and able to carry out those wishes. That's one of the things you're signing up for.

If you get through all these conversations and you still want to spend the rest of your lives together, you're golden.