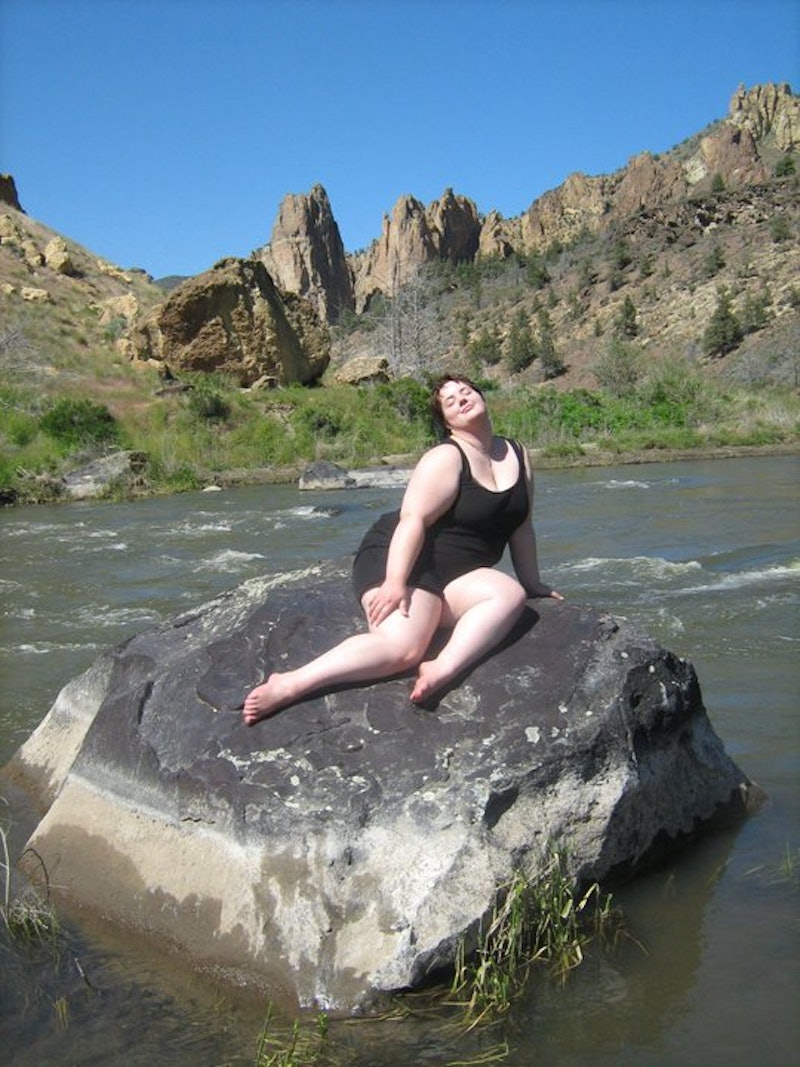 With more and more attention being given to issues of body positivity in the media, fat shaming is slowly beginning to be understood as the damaging and prejudicial behavior that it really is. Advertising fails like a recent body-shaming gym ad in the UK are starting to receive negative attention that will hopefully discourage other brands and businesses from similar behavior. However, even as body positivity and fat acceptance become better understood in Euro-centric cultures, many people still rely on outdated science like the BMI scale and societal biases that encourage prejudice against fat individuals. Often, these prejudices can take on a quasi-religious tone, implying that "thin" equals "virtuous."

My experience growing up in a fundamentalist Christian subculture has made me intimately aware of the way religion and body shaming can be linked. When I was a child in an Evangelical church, I viewed my body with deep suspicion, and felt that being fat was one of the worst things that could happen to a person. Grappling with the dark side of my faith when I left my home church and gained a large amount of weight forced me to learn to love my body and disassociate my size from my worth.

The Evangelical movement has generally not held the body in high esteem, as R. Marie Griffith explained in Born Again Bodies: Flesh and Spirit in American Christianity. According to this worldview, the body is at best a fallen vessel for the spirit, and at worst a base, animal element driven constantly to corruption.

On top of this general disapproval of the physical body, I was made to realize very early on that, as a woman, my feminine body was particularly problematic. As I grew and developed, my body was carefully constrained to prevent it from debasing itself or others. Modesty was an essential tenet of my church’s doctrine, and I was constantly warned that exposing my flesh, even portions of it that seemed harmless, was dangerous.

Even as I attempted to sanctify and constrain my adolescent body, the church sexualized me, treating me as an object with unavoidably carnal dimensions.

Since the body was always suspect in my church, pleasure, especially sensory pleasure, was also highly untrustworthy. Virtue was in many ways defined in opposition to pleasure, something along the lines of, “If it feels good, don’t do it.” When the adults in my life dieted or made judgments about other people's bodies, they often employed religious reasoning for doing so. Since the body was believed to be God’s temple, dishonoring it with the sin of gluttony was certainly inappropriate, and displayed a lack of self-control — one of the cardinal virtues of fundamentalism.

Aside from doctrinal concerns over gluttony and sin, fatness was also undesirable in my community for a more pragmatic reason: It made a woman less marriageable. Since marriage and childbearing were believed to be a woman’s greatest good, it was important that my body, while not actively tempting to a man, was pleasing enough to draw his attention. This catch-22 — be beautiful, but not tempting; worthy of attention, but careful to avoid too much of it — was a very confusing line to walk. Although I was not a fat child, I spent hours picking apart my physical flaws and trying to edit my body to match up to the expectations of those around me.

I remember looking at one of my plus size friends, feeling pity for her because her body made her so much less worthy in this world. I thought then that being fat was a shameful misfortune; one that should be avoided by any means necessary.

I started college in 2007 and eventually grew disillusioned with the church and its teachings. Discovering feminism gave me the tools I needed to escape my regressive culture and build what I found was a better life for myself. However, separating from the community in which I had spent my entire life and working through the process of developing an entirely new belief system was exhausting and terrifying.

Food was the one emotional constant I could count on when everything else in my life was dissolving, and in the course of my four years of undergraduate school, I gained over 100 pounds. Suddenly, I was one of the fat girls I used to pity. I felt both invisible and ultra-visible, like my body was an unavoidable indicator of my own internal strife. Slowly, I discovered body positivity and fat acceptance through fashion bloggers like Gabi Gregg of Gabifresh and Nicolette Mason. I read every book on the subject that I could get my hands on, connecting the dots between my feminism and my growing love for my body.

I was aware that my own body issues were shaped largely by the environment I had been raised in, so it was easy for me to understand that my old fundamentalist culture’s desire to control said body was underpinned by larger issues. What surprised me, though, was seeing that women who had been raised outside of the Christian church struggled with many of these exact same issues. The words may have changed — “virtue” became “health;” the Bible was replaced with population studies and BMI charts — but the overall thrust of the message was the same: Women’s bodies were a moral battleground.

I realized that a lot of contemporary, seemingly secular cultural concerns were grounded in distorted religious anxieties about sin and salvation. Although I no longer had church elders preaching to me about my proper place as a woman, the magazines I read seemed to take largely the same tone. While I wasn't being implored anymore to think of my body as God’s temple, I was still taught to discipline it for the betterment of my person. I had escaped fundamentalism, but somehow, the landscape hadn’t really changed.

Over the years, I’ve come to terms with my body. It’s large and soft and imperfect. It falls far outside the acceptable standard of beauty in contemporary culture. Yet strangely enough, I’m happier than I’ve ever been. To get to this place, I had to relearn the way I conceptualized bodies and beauty, which wasn't easy. So many different parts of life are connected to the body that I was forced to rethink everything I'd ever learned about sex, gender, and even spirituality in order to honestly love myself. Books like The Purity Myth by Jessica Valenti made me realize that my body was my own, and that I didn't have to answer for it to others. Creative works like Substantia Jones' Adipositivity Project taught me to see fat bodies as beautiful and worthy of attention.

For years, I thought I had to have the aspirational figure, as defined by cultural norms at large, before earning the right to love and happiness.

But now, at a size 22, I have a job I love, a supportive partner who makes me incredibly happy, and even an amazing wardrobe, thanks to all the radical fat girls who have broken down barriers before me. I worry less because now I pass far less judgement on myself and others. I was raised to think my body was fatally flawed and in need of constant monitoring, and that its appearance signified how right (or not) I was with God.

Today, I know that’s just not true. My body is just that: a body. Not a temple, not a form of currency, not a temptation or a trap. It’s the vehicle through which I live my (pretty amazing) life, and for that I am incredibly grateful. I’m free now to take up all the space I need.