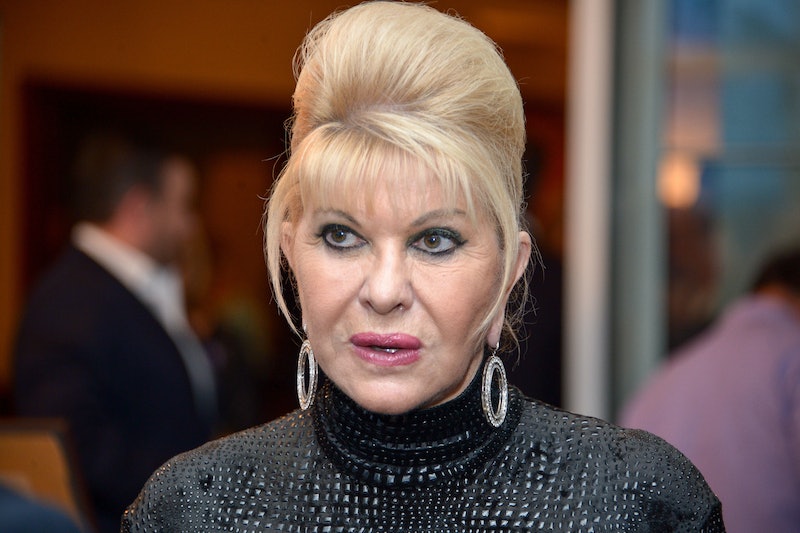 In her interview with The New York Post, which ran Sunday, the first Mrs. Donald Trump made a number of bizarre, offensive, and not exactly accurate statements that explain why she and her husband were such a good match — at least, throughout the 1980s. In addition to making it clear that Trump's hand size did not mean any other part of him was small (BTW, thanks for confirming), she went on a rant about a pregnant Mexican teenager. But of all her pearls of wisdom on the Republican frontrunner, Ivana Trump's comments on The Donald's feminist credentials — or, more accurately, his lack thereof — are especially illuminating.

“I don’t think he’s feminist,” Ivana Trump told The Post's Dana Schuster. “He loves women. But not a feminist." In what should go down as one of the most entertaining and (inadvertently?) funniest parenthetical phrases in journalism history, Schuster noted: "(Ivana’s reps called The Post two days after the interview to clarify that Donald was a feminist. Then they called to say he wasn’t. An hour later, they said he was.)" Apparently, flip-flopping, especially on women's issues, comes naturally to the Trump clan, both former and current. But Ivana's remarks about her former husband's views of women and feminism had more than a kernel of truth.

To anyone who has ever listened to, read about, or witnessed his barrage of misogynistic statements over this election cycle (let alone over his whole career), it is abundantly clear that Trump is about as much of a feminist as Taylor Swift is a Harry Styles fan. Remember, this is the man who told New York Magazine in 1992 that when it comes to women, "you've got to treat 'em like sh*t." So saying that Trump's not a feminist is not exactly controversial.

However, there is something more to be said about the latter part of Ivana's statement — that Trump loves women, even if he doesn't identify as a feminist. Trump's own record thus far has illustrated this seeming contradiction. While he's happy to block women from having abortions, and claims (at least for a few hours) that he'd punish women seeking them, Trump has said "I cherish women." In August, he said on CNN's State of the Union that "I want to help women. I’m going to be able to do things for women that no other candidate would be able to do, and it’s very important to me."

So Trump says he loves women, but he's not a feminist — which means he doesn't believe that women should have the same political, social, and economic opportunities as men. And therein lies the rub. To love or cherish women isn't the same thing as respecting or valuing them. And based on his comments toward and treatment of women, Trump seems to allot value to them through a very narrow set of criteria: their physical beauty and their ability to help him increase his wealth or fame.

Trump may love women. He may deeply admire his daughter Ivanka's successful business career, or even, as Ivana claims in the New York Post interview, call his former wife for her opinions as he's campaigning for president. But it's not good enough to respect a select group of women that meet one narrow standard of worth. Even though Trump claims he'll be "really good for women," if he insists on cherishing them, rather than respecting them as human beings, then it'll be impossible for him to live up to that pledge.