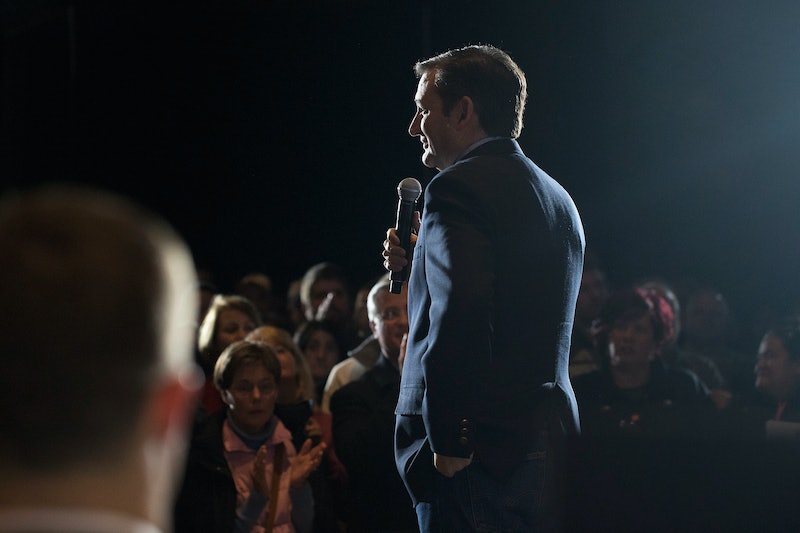 On Tuesday, Republican presidential candidates Donald Trump, Sen. Ted Cruz, and Gov. John Kasich will vie for Wisconsin's 42 delegates. This primary is an important contest in the race for their party's nomination. Trump is the clear frontrunner, but with several candidates divvying delegates up among themselves throughout the race thus far, it's possible that he won't get enough during the primaries to secure the nomination. Will Ted Cruz win Wisconsin? If he pulls a win on Tuesday, it will make a brokered convention in July more likely.

Of course, it's impossible to know for sure until the votes are cast and counted. But things are looking good for Cruz, at least as far as the polls are concerned. Real Clear Politics compiled recent polls from the Badger State, and the average puts Cruz at 40.2 percent, Trump at 33.7 percent, and Kasich at 19 percent. The way the state allocates its delegates means that even a slight win for Cruz could get him a significant number of them.

Wisconsin gives 18 of its 42 delegates automatically to the statewide winner. The remaining 24 are split up between eight congressional districts, each of which has three delegates. Whomever wins the most votes in each district gets all three of its delegates. So if Cruz gets a plurality of the statewide vote and, say, five out of eight congressional districts, he could walk away with 33 of the state's 42 delegate, leaving only nine for Trump.

At this point in the race, the question isn't so much whether Cruz will get enough delegates to secure the nomination as it is whether Cruz and Kasich will successfully keep enough delegates away from Trump. A candidate must earn 1,237 delegates to get the nomination — one more than half the total allocated by the Republican Party. Cruz is going into Wisconsin with 463. He would need to win about 82 percent of all delegates at stake in upcoming primaries (943) to reach the magic number, a likely too-tall order for the struggling candidate, especially considering that the states in which he had the best shot — the evangelical Southern states — have already cast their votes.

Donald Trump has 752 delegates going into Tuesday, and needs about 51 percent of those remaining, something that's neither unfeasible nor guaranteed. Trump is currently performing at 94 percent of his "target" calculated by Aaron Bycoffe and David Wasserman at FiveThirtyEight. The target is the number of delegates they think Trump would need to earn in each primary in order to get him the nomination. If Trump continues at 94 percent performance, he would be short only 74 delegates at July's Republican National Convention. Wisconsin's 42 delegates are important in that context.

If no candidate has at least 1,237 delegates at the convention, about three-quarters of the delegates would become unbound from their states' primaries or caucuses, free to vote for whomever they want. That's called a brokered convention, and it's the only chance Cruz, Kasich, or anyone else who isn't Donald Trump has of being the Republican presidential nominee. The race overall may be a big-number game, but the small numbers in 2016 could be the determining factor as to whether or not we have brokered convention chaos in July.