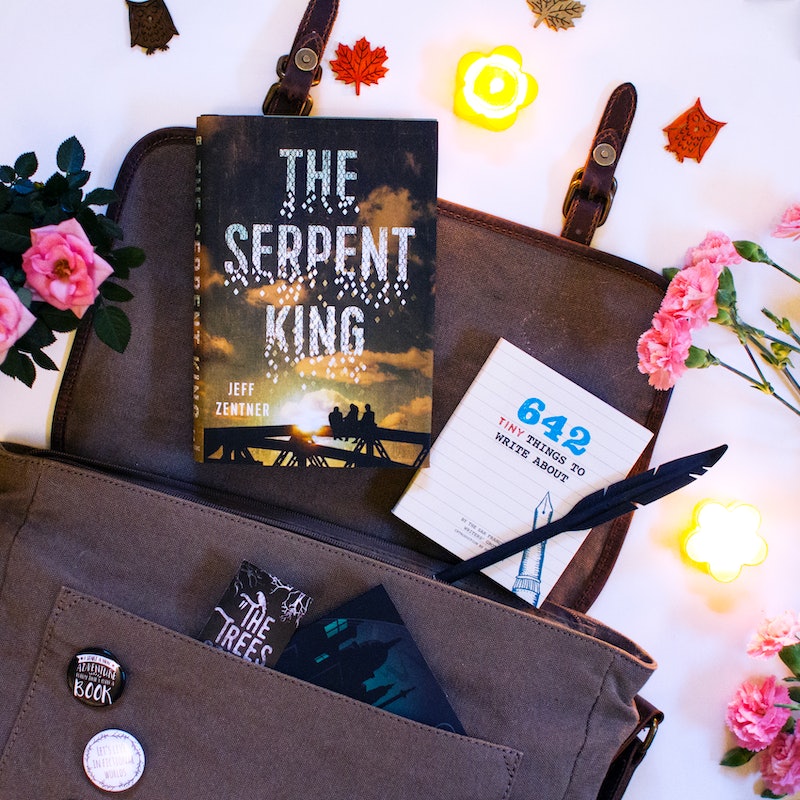 Every now and again, I get very, very lucky, and I stumble upon a book that pervades my heart and mind and refuses to leave. The Serpent King is one such book. It's one of those books I wish existed when I was graduating from high school many years ago, when I had no idea who I was or who I was becoming.

In Jeff Zentner's debut young adult novel, we're introduced to a gang of three friends, all outcasts in their small Tennessee town. Dill is a conflicted budding musician who's shunned by the town after his father, a preacher notorious for using lethal snakes in his sermons, is sent to prison for a heinous crime. Lydia is a fashion blogger who boasts thousands of faithful online followers, dozens of famous faraway friends, and a future gleaming with promise. Then there's Trevor, a gentle giant who prefers fantasy novels to football and fist fights, much to the chagrin of his abusive, alpha male father.

In a lovely, painful narrative about their senior year in high school, these friends learn that it's OK to want more from life than what Forrestville, Tennessee has to offer and discover that moving on doesn't mean saying goodbye forever to the people or the places that made you who you are. It's a heart wrenching novel that doesn't shy from difficult subjects, but it's also a gorgeously written story about growing up, falling in love, and finding your place in the world.

If I still haven't convinced you to pick up a copy of the book, maybe the words of Mr. Zentner will do the trick. Here are 10 The Serpent King quotes that celebrate life, love and coming of age:

2. "If you're going to live, you might as well do painful, brave, and beautiful things."

3. "So when I watch trains, it makes me think about how much movement there is in the world. How every train has dozens of cars and every car has dozens of parts, and all those parts and cars work day after day. And then there are all these other motions. People are born and die. Seasons change. Rivers flow to the sea. Earth circles the sun and the moon circles Earth. Everything whirring and spinning toward something, and I get to be part of it for a little while, the way I get to watch a train for a minute or two, and then it's gone."

4. "'I read somewhere that a lot of the stars we see don't exist anymore. They've already died and it's taken million of years for their light to reach Earth,' Dill said.

'That wouldn't be a bad way to die,' Lydia said. 'Giving off light for millions of years after you're gone.'"

5. "After a while he opened the door, and started to go inside. But he couldn't. Only the expanse of the indifferent, infinite starry sky could contain his ferocious, surging hurt."

6. "She's it. She's everything. She's the standard by which I'll judge beauty for the rest of my life. I'll measure every touch to her breath on my skin. Every voice to her voice. Every mind to her mind. My measure of perfection. The name carved into me. If I could, I would lie with her under these stars until my heart burst."

No song would fix that."

8. "Some fall in glorious ways. On green fields of battle as old warriors, surrounded by friends, fighting for their homes, fighting cruelty.

Some fall crawling in the dirt of Forrestville, Tennessee, in the dark, impossibly young and alone, for no good reason at all."

9. "Something broke loose inside Dill's mind. Something that had been moored against the roaring tumult. It came untethered and crashed around with reckless abandon — burning, shattering, consuming. He stopped seeing color and all became a swirling, howling, leaden gray desolation. But the pain hadn't arrived. The way the sea recedes before a tsunami, so every part of him receded. And then the pain struck."

10. "Starlight filtered through the green canopy of towering oaks and magnolias on Lydia's street. Sweat trickled down Travis's back the minute he hit the muggy air. But he didn't mind. This was as good as Friday nights got."