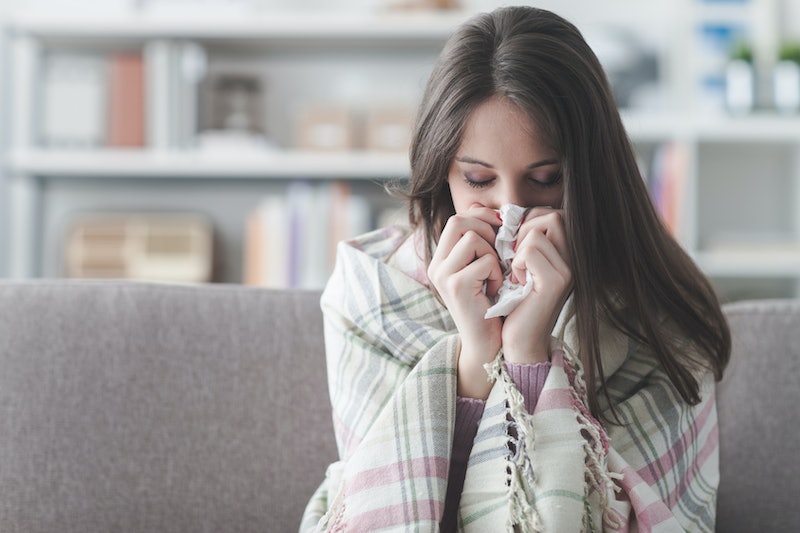 If you're anything like me, you dread getting sick. Admittedly, I don't think anyone likes being sick, but as someone who has a terrible immune system, I feel like I'm constantly on the verge of an all-consuming sickness. More often than not, it all starts with your basic, garden-variety cold, so no one is more excited than me to hear that scientists might have found a cure for the common cold — for real. Or at least, they might have made a discovery that will eventually lead to finding a cure for the common cold. Either way, it's potentially a pretty big deal.

A research team from McMaster University in Ontario recently conducted a study examining how the body fights the common cold. Their research narrowed in on a protein involved in your metabolism that helps your immune system detect viruses in your body. The protein triggers an "antiviral" response, which tells your body to fight the virus. If further research supports these initial findings, this could set the foundation for even larger scale research beyond curing the common cold. It could even help researchers figure out how to prevent the growth of some cancers.

How do we get from curing colds to preventing cancer? Well, the logic behind the idea is that if researchers can determine how to track down some viruses (like those linked with the common cold), they may also be able to trace oncoviruses, which are the viruses behind some forms of cancer. Brian Lichty, a professor of pathology and molecular medicine at McMaster University, told Mic more details, explaining, "This identifies a critical component of the machinery that immune cells use to detect viruses... this means that, the better we understand this pathway, the better we can stimulate it."

If you're lucky enough to be unfamiliar with the symptoms of the common cold, it's most frequently recognized by the following: Runny or stuffy nose (or if you're like me, both happen at varying intervals), sore throat, sneezing, moderate fever, chills, body ache, and fatigue.

Typically, these symptoms wrap up in a week or two, but they make a big impact on people every day. According to the Centers for Disease Control and Prevention (CDC), there are many viruses and strains which make up the common cold; rhinoviruses are the most common, however, and they can spread from one person to another through the air. (So now is time for my polite reminder to please make sure you wash your hands regularly and cover your mouth when you sneeze or cough.) It's also worth noting that if you're in good health, dealing with the cold is usually nothing more than an inconvenience.

However, if you have a chronic illness or an autoimmune disease, something as seemingly small as the common cold can have a serious impact on your health — which is another reason it's so important that everyone practices good hygiene and help to prevent the spread of germs.

So, why don't we already have a cure for the common cold? Why isn't there a vaccine, like we use for the flu? Basically, because there are so many strains of the common cold that it may not be worth it to invest so much time in protecting us from individual ones — we might just fall prey to another. For example, while the rhinoviruses are the most common, you can also catch the common cold from an adenovirus or a coronavirus. Some strands of the common cold also mutate quickly by slightly changing its proteins, which could render vaccines useless, even if they were initially the right fit.

At the end of the day, symptoms are basically the same for all strands of the common cold; since they end fairly quickly, we're used to just "dealing with it." But this research could not only lead to us to no longer suffering from our biannual colds, but could also pave the way for really important health-related research that could save a serious number of lives down the road. What's cooler than that?