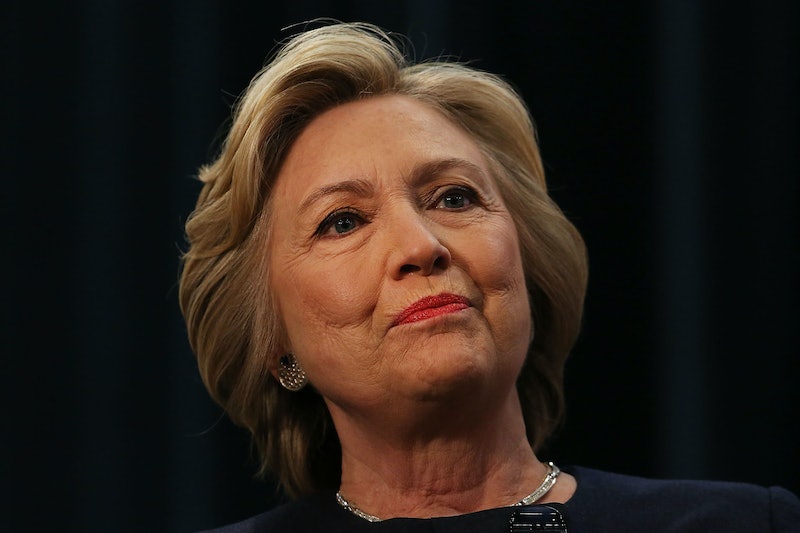 It's almost hard to fault pro-lifers (or more accurately, anti-choicers) for pouncing on Hillary Clinton's use of "unborn person" during an appearance on Sunday's Meet the Press as some small, vague victory in the abortion battle. After all, the week before had brought some unwanted (though not unwarranted) negative attention on their movement. Last Wednesday, Republican presidential frontrunner Donald Trump claimed that women who sought illegal abortions should be punished (he later walked back on the statement). And while his GOP peers criticized him, the remarks reminded the country that all the Republican presidential candidates believe that abortion should be banned, with only a few extreme exceptions. That contradicts how the majority of Americans feel. (According to the latest numbers from the Pew Research Center, 51 percent of American adults think abortion should be legal in all or most cases.)

Clinton's utterance of "unborn person" makes more sense in that context. But why bother with context when one can grasp at straws?

Some anti-choicers have used the statement to attack Clinton, but more have taken a larger swing at the pro-choice movement. The headline of an article on The Federalist, a conservative website, reads: "Hillary Clinton Says Babies Are People But Don’t Have Rights." The article's author, Nicole Russell, wrote, "Hold up: Either the baby is a blob with zero rights, or the baby is a person with rights. One cannot have both in any morally sound, intellectually honest universe." WND (World Net Daily), which is perhaps best known for espousing Obama birther conspiracy theories, published an article headlined, "Hillary: Unborn Babies Have No Rights."

You could almost hear anti-choicers screaming "There! Right there!" as the words "unborn person" came out of Clinton's mouth. Her one-off comment has been interpreted as her admitting that a fetus is a person, thus caving to the oh-so-sound logic of the anti-choice movement — namely, that the fetus / cells / unborn person inside a woman has a right to existence that supersedes that woman's right to control her body.

At National Review Online, Erika Anderson was champing at the bit over Clinton's remark, ready to declare it a massive pro-choice concession: "The pro-choice movement takes extreme care to avoid calling an unborn child a person — preferring the term 'fetus' in order to preserve the argument that abortion involves the well-being of only one person, not two." She adds with more than a hint of self-righteousness that "Words matter deeply to the security of an increasingly weakening pro-choice movement. The cracks in their armor have become more clear with scientific advances and the ability to lower the age of infant viability, so when a powerful voice for their cause accidentally reveals the truth — they take a hit."

However, it's actually the anti-choice movement that has so often clung to specific wording to scare and guilt people onto their side of the abortion battle and to try their darnedest to inflict guilt and emotional suffering on women who choose to have abortions. It's not uncommon for anti-choice advocates to refer to the post-Roe v. Wade era as a Holocaust. Vice noted in a 2013 article that anti-choice advocates pushing for a late-term abortion ban in Albuquerque, New Mexico referred to the city as “America’s Auschwitz.” It is the anti-choice advocates who wait outside clinics to call women "murderers" for ending a pregnancy that they cannot or do not want to continue.

To be fair, even some pro-choicers haven't been so calm about Clinton's word choice. As Alan Rappeport at The New York Times notes, Clinton "frustrated some abortion rights supporters who said that her characterization of the unborn as a person shamed women who choose to terminate a pregnancy." He cites Diana Arellano, manager of community engagement for Planned Parenthood of Illinois, who tweeted that Clinton "further stigmatizes abortion" by calling a "fetus an 'unborn child.'" Arellano wasn't exactly right on the wording either, by the way. Clinton actually said "unborn person," which may sound like I'm splitting hairs, but so is pretty much the entire backlash to the comment.

But the uproar only shows how frustratingly polarized the abortion debate is. People are taking up arms over a choice of two words, without any actual consideration for the U.S. Constitution or, you know, women. Instead, anti-choicers are relying on linguistic acrobatics. And sadly, some pro-choicers think they must play that game as well.

Clinton's use of "unborn person" is not why abortion access for women is in increasing danger. Laws like the ones in Texas, Mississippi, and more than 20 other states which place onerous regulations on physicians and clinics are the reason abortion access is being reduced throughout the country. That anti-choicers are relying on wording shows a certain intellectual and legal desperateness, but I doubt it will stop them from pushing their agenda.