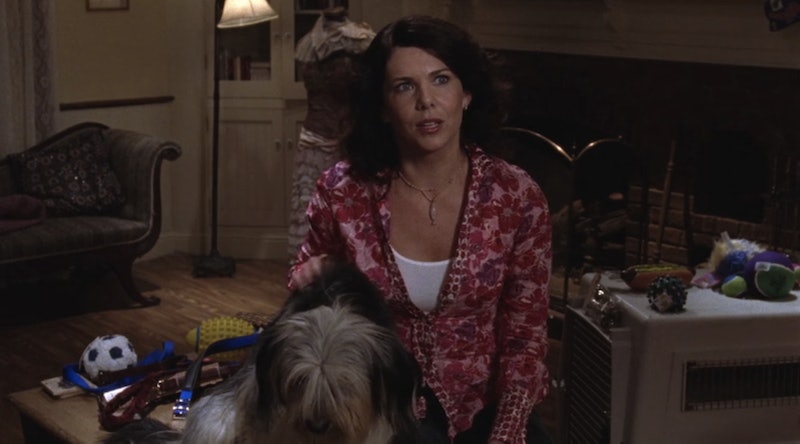 We've been keeping running tabs on what characters are returning to the Gilmore Girls Netflix revival, and sometimes it's hard to keep track. All of Rory's boyfriends are returning, and Melissa McCarthy is a no, but at the end of the day only one character really matters: Paul Anka. Back in February TVLine confirmed that Paul Anka the dog is joining the Gilmore Girls revival, And now, thanks to an adorable shot of the pup from the Lauren Graham's Instagram, we finally have photographic evidence.

Paul Anka, of course, was a late addition to the series, bursting in during a dark period in season six when Lorelai, sans Rory, needed a quirky new companion. Truth be told, the mutt could've easily been written out of the show considering that, well, it's still be ballpark a decade since the show's been over, and dogs have a tragically short lifespan. But it would seem that Sparky, the dog actor behind Paul Anka, is still alive and kicking, so sure enough he's getting the royal treatment on the Stars Hollow set. Sparky is kicking back in the director's chair, looking soulfully into the iPhone camera. Is he going to take the reins for an episode? Or does he not like chilling in his little doggy trailer? It's unclear, but suffice to say, he hasn't aged a day.

So far it's hard to guess what Paul Anka's role will be in the revival, besides providing a much-needed boost of cuteness. I would like to hope that his Doggy Swami business finally took off and he was able to make an honest living from his fortune telling prowess. Realistically speaking, that's probably not the case. However, there's still slated to be plenty of Stars Hollows town events (I mean, when is there not) and he could definitely take up a new booth. Or maybe he's going to be an essential part of the Gilmore Girls wedding, regardless of who may be getting married. There's no question that Paul Anka would make an excellent ring bearer or best dog. As long as we don't have a Cinnamon's wake redux, I think I'll be fine.

In fact, at the end of the day, I'd be more than happy just to see Paul Anka lazing around the Gilmore Girls household. Regardless of his involvement, we're stoked to see him return to the series looking like his best self. Let's hope that time hasn't changed the canine wonder and he still has all of his strange quirks when we check in on the Gilmore household.