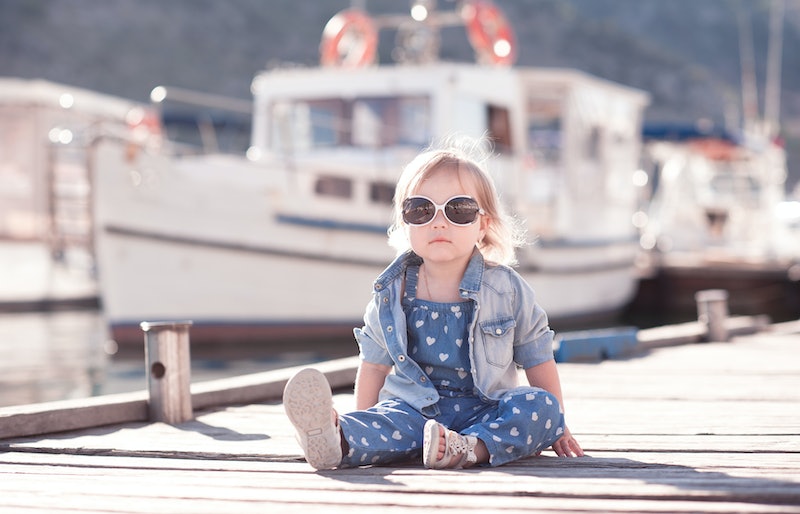 Ever since fifth grade, I've been obsessed with names that have badass meanings. It all goes back to one extremely specific experience: We had to make a personalized coat of arms, and one of the quadrants was supposed to illustrate the meaning of our names. "Awesome," I thought. "'Foley' means 'marauder,' which essentially is a pirate." No, no, clarified my teacher. We were supposed to illustrate the meaning of our first name. "Madeleine" means "Woman of Magdala." I was immediately bummed. You try illustrating "woman of Magdala." It sucks.

But the process of picking a baby name involves more than simply finding one whose meaning you like. It has to sound nice both on its own and with the surname; additionally, it helps if it proves resistant to cruel childhood nicknames, because children are tiny little monsters with sharp claws and sharper tongues. Oh, and you don't want a name that will be immediately dated. And you don't want to pick a name with a truly magical meaning that makes your child sound like a J.R.R. Tolkien creation. As much as you might wish you were an elf or a wizard, you are not (probably), and neither is your kid (also probably).

In Hebrew, Lilith means "night monster," "ghost," or "storm goddess," depending on the translation. According to Jewish folklore, Lilith was Adam's rejected first wife, who was turned into a demon after her refusal to obey him. Though it remains unpopular among the, uh, more religious communities, Lilith has blossomed throughout pop culture as a moniker full of female strength and independence.

Perhaps its meaning — "little and fiery" — is why the Irish name "Aiden" has become so popular in recent years. The name originates from Aodh, the Celtic god of the sun, though there are similar versions of it throughout a number of cultures. "Aydin," for example, is a Turkish name meaning "enlightened," which is also awesome.

I am going to call on any Greek speakers reading this for the appropriate pronunciation of "Aella," because I searched so many baby name boards that my eyes hurt, and there still doesn't seem to be a consensus. Which sucks, because "Aella" means "whirlwind," and in Greek mythology, she was a fierce Amazon warrior notorious for wielding a double-edged sword. All of that is awesome, and accordingly, I would really like to know how to say it correctly. "Aye-ELL-uh" and "AY-la" seem to be two most popular pronunciations. Both sound nice and tough and strong, right?

OK, so in most languages, the consensus regarding the meaning of "Oliver" and "Olivia" is that they both mean "olive tree." In German, however, "Oliver" and "Olivia" mean "elf army." Which is honestly amazing. Do elves sharpen the toes of their pointy shoes into tiny spears? Do they shoot flaming arrows out of their pointy hats? I'm not sure, but the approximately 50 Olivers and Olivias we all know might.

In Finnish, "Taika" means "magic spell." Hi, that's amazing. The pronunciation is fairly phonetic, with my foray into the World Wide Web pulling up pretty much one answer: "tay-kuh." Succinct, magical, witchy.

Though Lowell has traditionally been considered a boy's name — a WASP-y, "last name as a first name" for boys — it can easily work for any baby ever, especially given its awesome French meaning: "young wolf." Its popularity hit a peak in the 1930s, when it was in the top 150, and since then "Lowell" has waited in the shadows of its den. Its wolf den. Sorry, I'm garbage at jokes.

I know this name is very mature and old-school for a wee babe, but "Alfred" means "sage; wise; elvin." It holds the combined power of intelligence and whimsy, which is all you could ever want in a name. "Alfred" is derived from the Old English "Aelfraed," meaning "elf counsel." He gave advice to elves, I guess! Plus, Alfie and Freddy are both very cute nicknames. Just think about it, guys. Keep Alfred in the running.

I must have written over 10 stories with characters named "Luna" growing up. "Luna" means "the Moon" — which, in addition to being a beautiful fixture in our skies, controls our tides. Plus, Artemis, the Greek goddess of the Moon, was badass. The Moon is powerful AF. So is the name "Luna." Also, I once had a dream in which my daughter was named Luna, and I took it as a sign that I should make it a reality someday.

More like this
The 'Hocus Pocus' Sequel Finally Has A Release Date & It Makes Total Sense
By Shannon Barbour and Radhika Menon
5 Ways To Stand In Solidarity With Women In America From The UK
By Sophie McEvoy
How To Fight For Reproductive Rights, Based On How Much Time You Have
By Courtney Young
Side Character Energy Has Arrived — Here’s What That Means
By Sophie McEvoy
Get Even More From Bustle — Sign Up For The Newsletter