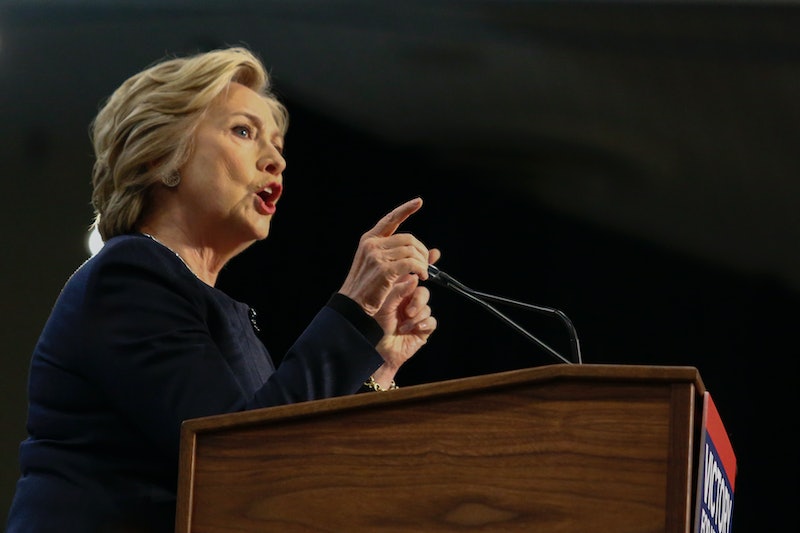 Wisconsin's primaries are the next contest in the race for the White House, and they're just around the corner, kicking off at 7 a.m. CT Tuesday morning. With 96 delegates at stake on the Democratic side and 86 of the pledged delegates allocated on a proportional basis, will Hillary Clinton win Wisconsin? Leading up to Tuesday's contests, Clinton was leading Sanders last week with a margin of 55 percent voter support to Vermont Sen. Bernie Sanders' 42 percent. But according to the most recent polls, Sanders is currently leading in Wisconsin polls with 47.9 percent to Clinton's 45.3 percent, so it's looking to be a tight race in the Badger state. Sanders is also leading far ahead of Clinton with independent voters in Wisconsin, with 57 percent to Clinton's 37 percent.

The state is a pretty important one in the Democratic race — Obama beat Clinton there in 2008. A former lieutenant governor, Barbara Lawton, who voted for Clinton in 2008 told The Washington Post, "We're really looking for someone who you can trust. There's such a longing for the truth." Lawton plans to vote for Sanders on Tuesday because of Clinton's ties to Wall Street. The Sanders campaign's chief strategist Tad Devine also shared in the importance of Wisconsin's primary, telling The Washington Post that the state is "a great proxy for a candidate's strength in the general election." The state is sure to be a big one in the presidential race, and one that will have an important role moving toward the general election.

Even so, the Clinton campaign is feeling the heat and responding by turning it up a notch. They are confident that however Wisconsin votes, it won't have much of an effect on Clinton's lead across the country. Clinton strategist Joel Benenson told MSNBC on Monday, "Either way this state comes out, I think it's close enough there isn't going to be a big shift in the 230 or plus pledged delegate advantage that Hillary Clinton has right now."

On Saturday, during a campaign stop in Wisconsin, Clinton made sure that voters knew she has been a Democrat for longer than Sanders. She said, "I am also a Democrat and have been a proud Democrat all my adult life. And I think that is kind of important if we are selecting someone to be the Democratic nominee of the Democratic Party." A state that has a history of political reform, though, Wisconsin voters are less concerned about who was a Democrat longer and more interested in knowing who will represent their voices in the White House.

In fact, one Sanders supporter, Patrick Doyle, told The Washington Post that he would do everything he can to make sure he didn't have to vote for Clinton in a general election. Others believe that a Trump presidency could lead to the "political revolution" Sanders has called for.

As with polls leading up to any primary, Wisconsin projections are no different. We will just have to wait until Tuesday to see how Wisconsin votes.