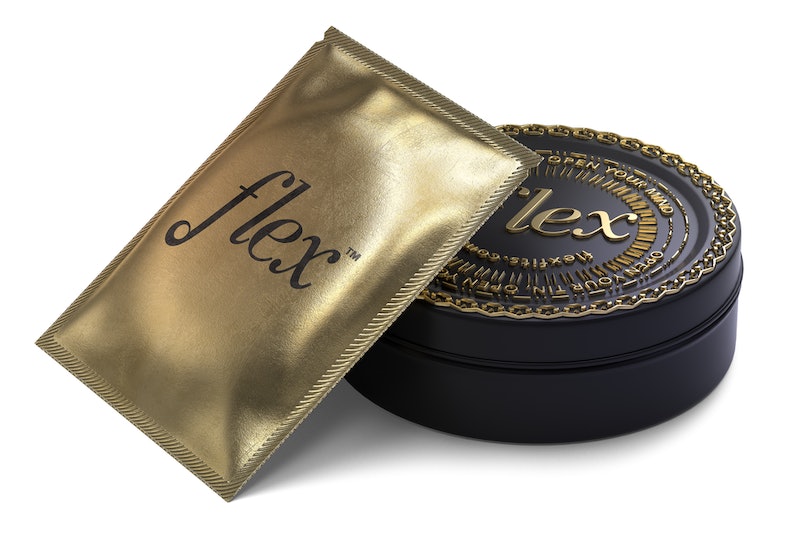 Just about every woman has her view on whether or not having period sex is right for her. I can talk for days on the many health benefits period sex can provide. For instance, it can help alleviate cramps, shorten the length of your period, and even lead to greater intimacy with your partner. I mean, blood can get everywhere. You can’t get anymore intimate than that.

Trust me, I can totally understand why some people don't enjoy period sex. But if the mess is what’s turning you off from getting it on, well, there’s a new tampon alternative about to hit the market that’s meant to make all your period sex worries go away.

It’s all about menstrual discs. The Flex Company created FLEX, a sleek, disposable menstrual disk that can be worn for up to 12 hours. It’s doctor-approved to be safe, easy to use, BPA-free, hypoallergenic, and won’t cause toxic shock syndrome. On an even brighter note, the mission behind the product is a pretty noble one.

“FLEX was initially developed as a comfortable, more satisfying alternative to tampons, pads, and cups. We took major issue with the products available to us—but more importantly, we were upset by the conversations being had about menstruation,” Lauren Schulte, founder and CEO of The Flex Company tells Bustle.

Let’s face it. Periods are a natural part of every woman’s life. It’s something we should all embrace. However, there’s still an unnecessary stigma around it. Because of that, Schulte started FLEX with “a mission to create positive, engaging conversations about women’s bodies.”

Here are five things you should know about FLEX:

Schulte learned about menstrual cups for the first time in 2014, and was immediately intrigued by their promise. However, she admittedly was frustrated by how difficult they were to insert and remove. By creating FLEX, Schulte looks to get rid of that difficulty.

FLEX is inserted straight in and then down to the base of your cervix and tucks in behind the pubic bone. This creates a leak-proof seal while leaving the vaginal canal free—unlike a tampon or cup, which plugs up a woman's vaginal canal.

Like a menstrual cup, FLEX collects rather than absorbs your menses. However, the key difference is that it's worn at the base of the cervix instead of in the vaginal canal. This allows for air to flow freely, which will help reduce cramping. As a major plus, it will also allow for intercourse while wearing it.

It also holds between five to eight tampons of fluid. That means you only have to change it about once or twice a day. It doesn't absorb like a tampon, so it won't cause infections or TSS.

FLEX freely markets itself as “a new product for mess free period sex.” But Schulte and Head of Growth, Erika Jensen, had reservations marketing it as such. After listening to feedback from many of its early users, they found that many people who chose not to be intimate during their period for whatever reason, responded positively to a product that would allow them to have sex during their cycle.

“FLEX allows couples who wouldn't have previously had period sex a new opportunity to talk about it and try it,” Schulte says. “And for those of us who were already comfortable having period sex (including us), FLEX saves our white sheets and allows us to enjoy the moment more, instead of running to the shower.”

4. FLEX Is All About Giving Women Options

According to Schulte, 85 percent of women who try FLEX for the first time want to switch to their product full-time. While women have responded very well to the 12-hour leak-free protection, cramp reliefs, and disposability, Schulte says the best compliment they receive is that FLEX is “so comfortable they forget they’re on their period when wearing it.”

While that’s great, Schulte and Jensen ultimately want to provide women with choice.

“Women are smart,” Schulte says. “That's the real point. We want to give women another option. So, if they're like us and hate the options on the market today, they can switch completely from tampons to FLEX.”

5. You Can Preorder Them Now

You can sign up for pre-orders today at The FLEX Company website. Free samples of the product are also currently being offered, subject to availability of course. They begin shipping the product out in September.

“We believe that a lot of stigma about women’s periods is driven by lack of education. And we believe women are yearning to feel more comfortable during their periods, and that better products, engaging conversations, and a deeper understanding of her body will create positive change,” Schulte says. “Women spend almost a quarter of their lives menstruating, and if we can help make women feel even slightly less ashamed about her body during this time, we’ve accomplished our mission.”