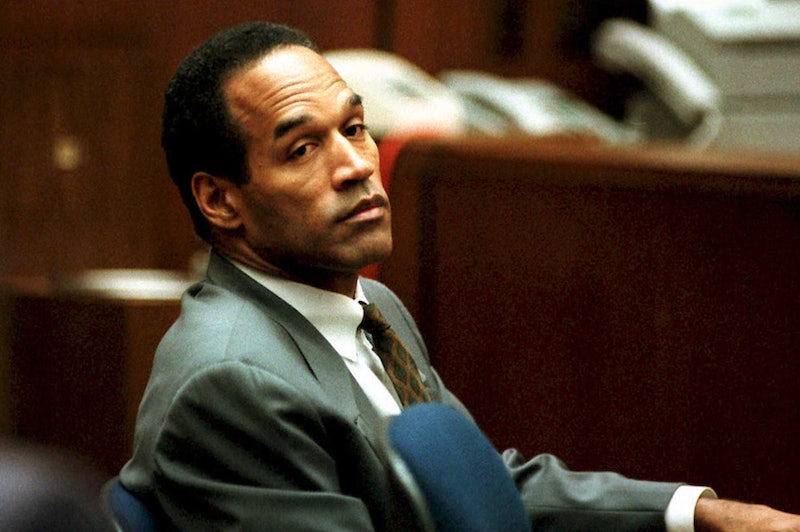 The April 5 season finale of The People v. O.J. Simpson: American Crime Story will depict one of the most famous moments in recent American history — Simpson's acquittal for the murders of Nicole Brown Simpson and Ron Goldman. According to Time, approximately 150 million Americans (57 percent of the country) stopped what they were doing, turned on their TVs, and watched as the months-long trial came to a close. After the verdict, the Associated Press reported that Simpson released a statement in which Simpson claimed that he would try find "the killer or killers" now that he had his freedom and could do so.

My first obligation is to my young children, who will be raised the way that Nicole and I had always planned. ... But when things have settled a bit, I will pursue as my primary goal in life the killer or killers who slaughtered Nicole and Mr. Goldman. They are out there somewhere. Whatever it takes to identify them and bring them in, I will provide somehow.

In response to Simpson's claims of finding "the killer or killers," the AP reported that Police Chief Willie Williams had no intention of reopening the case. "It doesn't mean there's another murderer," Williams said of the acquittals, according to the AP.

And, despite Simpson's vow, there are no news reports indicating that he hired a private investigator or went to any serious measures to investigate the murders. In March 2016, Simpson's friend and former manager, Norman Pardo, claimed they did conduct a search, but he offered few details about what this investigation entailed. As reported by Vanity Fair, Pardo spoke with KNX 1070 Newsradio and made this claim: “I know who did it and I know why they did it... I just can’t disclose it right now.”

During the radio interview, Pardo also claimed he had attempted to speak with the LAPD. "We tried to talk to the police, but they took all my stuff regarding the incidents," Pardo claimed, without elaborating on what he meant by "stuff" or "incidents." He continued, saying, "We had people working on it, and when we talked to the police about it, they raided my office and took it all." He also didn't identify the people who were allegedly "working on it," or what "it all" referred to.

Bustle reached out to the LAPD for comment, but has not yet received a reply.

In 2011, Simpson's lawyer F. Lee Bailey (portrayed by Nathan Lane on American Crime Story) published a lengthy theory about who allegedly killed Nicole and Ron Goldman. The essay can be read in its entirety on Bailey's website, but he suggests that drug dealers allegedly murdered the pair in a case of mistaken identity. This aligns with the defense's claims during the trial, as reported by New York Times writer Kenneth B. Noble, who wrote that the "defense has ... hinted broadly that the killings may have been drug-related."

But, Simpson himself has never agreed with that theory, nor offered a theory of his own. And, despite his vows to search for the "killer or killers," there is no indication beyond Pardo's claims that this investigation ever happened.