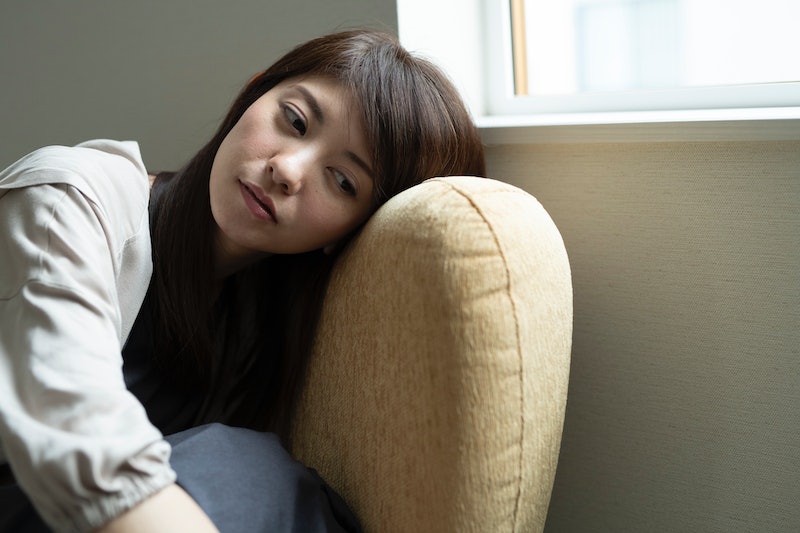 I cut. I have struggled with self-harm for around 17 years. I am currently in recovery, meaning I am not actively harming myself. Self-harm, however, is similar to alcoholism; I’m not convinced the urge will ever entirely leave me, which is why I say "I cut" rather than "I used to cut". Not hurting myself is a continuous process. It is a decision I must make every day.

I’m not what most people would think of as a "typical self-harmer". I had a picture-perfect childhood, loved school, had lots of friends, and I routinely excelled. It never occurred to me that I might lose control. But when I suffered a traumatic miscarriage while embroiled in an emotionally abusive relationship, I was unprepared. I did not know how to verbalize what I was feeling or who best to approach for help — nor did I consider failure an option. So I pushed ahead with my life, and refused to acknowledge that I was far from OK.

Somewhere in my despair, I stumbled upon what I thought was an "answer" in cutting. Unfortunately, self-harm is shrouded in a stigma that prevented me from accessing the support I needed. This resulted in years of deception, until my mental health had deteriorated to the point of complete breakdown.

So, yes, I cut. It has taken my entire adult life to say that publicly. Beating any addiction is extremely difficult; fighting the shame of my habit is even harder. I would like to break the cycle of silence. I believe the most effective way of achieving that is by shattering the dangerous misconceptions that surround self-harm, so here are nine of them that need to be busted.

1. That Self-Harm Is About Attention

Most people go to extreme lengths to hide their self-harm. I have even stitched myself up to avoid having to tell others about my problem. According to The Royal College of Psychiatry, while "you may feel like harming yourself if you want to show someone how distressed you are or to get back them or to punish them ... this is not common – most people suffer in silence and self harm in private."

Self-injury is often about trying to have control over a life that feels wildly out of control. It may also be a way to release pain; it can be easier to feel physical pain than mental anguish. Issues of self-punishment and penance could also feature, while others report using it as a coping technique. Hurting oneself can also act as a release of turmoil that allows a person to otherwise function. In other words, attention is very rarely a motive. The stigma and prejudice associated with mental illness make discovery a very frightening prospect.

People of all ages, genders, and backgrounds self-harm. This may not seem a very important point, but believe me, it is. When the only people ever talked about in relation to self-harm are teens, the stigma builds for those who do not fit that mould. Friends, family, and even medical professionals think you should have "grown out of it".

Personally, I didn’t hurt myself until I was 19 years old. I don’t fit into any of self-harm stereotypes, and I can attest that this has made both seeking and receiving help much harder. I have faced stigma not only because I cut, but also because I am an adult.

Self-injury takes many forms; cutting, burning, scratching, poisoning, the list goes on. Injuries vary from the superficial to the very severe. The notion that self-harm is solely little cat scratches or cutting belies the depth of the problem.

Of course, anyone hurting themselves in any way needs help, but it is important to acknowledge that self-harm escalates and can become incredibly dangerous very quickly. Personally, my self-harm spiraled rapidly. I went from scratching my skin with my nails to kitchen knives, razors, and finally scalpels. I have cut almost every part of my body and created wounds so severe they made hospital staff gasp. My blood loss became so relentless that I triggered angina attacks and have required multiple blood transfusions.

4. That If Scars Aren't Hidden It's OK To Ask About Them

Never do this. It takes a lot of courage to go out in the world with visible scars, but strangers can be cruel — or just plain rude. I have extensive scarring, and it took me many years to feel able to stop hiding it. For me, the feeling of stepping out in short sleeves is akin to being naked in public. Comments, questions, and stares can be devastating. No one with self-harm scars has a happy tale about their origins. If someone wants to tell you about them, they'll let you know. Until that point, don't ask, don't hint, and don't stare.

5. That People Who Self-Harm Seem Depressed

You would be surprised by how well many self-harmers function. I kept my issue secret for years. I completed my degree, worked full time, and had a busy social life. All the while, I was struggling with depression and an urge to hurt myself. Individuals from all walks of life deal with self-injury. The fact that it is as used as a maladaptive coping strategy can mean sufferers maintain outwardly normal and successful lives. You never know who's suffering.

6. That Self-Harm Is About Enjoying Pain

Pain is better thought of as a "side effect" of self-harm. For some, it's an essential part of its draw, for others, it plays no role. But people who self-harm do not inherently enjoy pain.

For me, the pain was just a thing I had to tolerate. I was able to deal with extreme pain solely because I was in control of it. Hurting yourself does not mean you don't need anesthetic when you go for treatment. Self-harm is an activity born from distress — it is not pleasure-seeking activity.

If I had a penny for every time someone asked me why I didn't stop, I wouldn't need to be paid for this article.

Self-harm is habit forming. At the beginning, it offers an apparent solution. Be it comfort or control, it provides a person who is suffering with some sense of respite. From there, it can very quickly become addictive and habit-forming.

I have battled this addiction for 17 years. My original reasons for cutting myself blurred. It actually ended up being almost a chore; just a thing I did, like brushing my teeth and washing the dishes. I understand how inconceivable this must seem, but self-injury takes a powerful hold of anyone caught in its grip.

8. That People Who Self-Harm Are More Violent

We hurt ourselves for a myriad of reasons. The Cornell Research Program on Self Injury and Recovery describes the act as a "private activity". They also note that those who self-harm are turning their frustrations upon themselves. We are not more prone to violence than anyone else.

9. That It's Selfish To Self-Harm

I hear this a lot. Too much. With self-harm comes enormous guilt and shame. I knew my actions hurt those who cared about me, but I was powerless to stop. I hated that I caused my loved ones pain. But the problem with assigning blame is that it feeds the cycle.

Every time a doctor told me I was wasting resources, my shame rocketed. Watching my mom cry in the hospital when a doctor explained I may have a heart attack at any time drowned me in guilt. But the power of those emotions only made me feel worthless and lead back to self-harm. If you love someone who's struggling, don't add to their guilt by calling them selfish, no matter how much it might be hurting you, too.

Editor's Note: If you are self-harming or are thinking about self-harming, know that you're not alone, and help is available. Check out this list of phone help lines and online resources, and don't be afraid to reach out for support.

More like this
This Psychological Effect Might Be Keeping You From Hitting Your Goals
By Lexi Inks
The 19 Best Tweets & Memes About Bisexual Awareness Week
By Lexi Inks
19 Latinx Therapists & Mental Health Experts To Follow On Instagram
By Kaitlyn Wylde, Naydeline Mejia and Lexi Inks
Help! I'm Not Getting Any Attention On Dating Apps. What Can I Do?
By Sophia Benoit
Get Even More From Bustle — Sign Up For The Newsletter