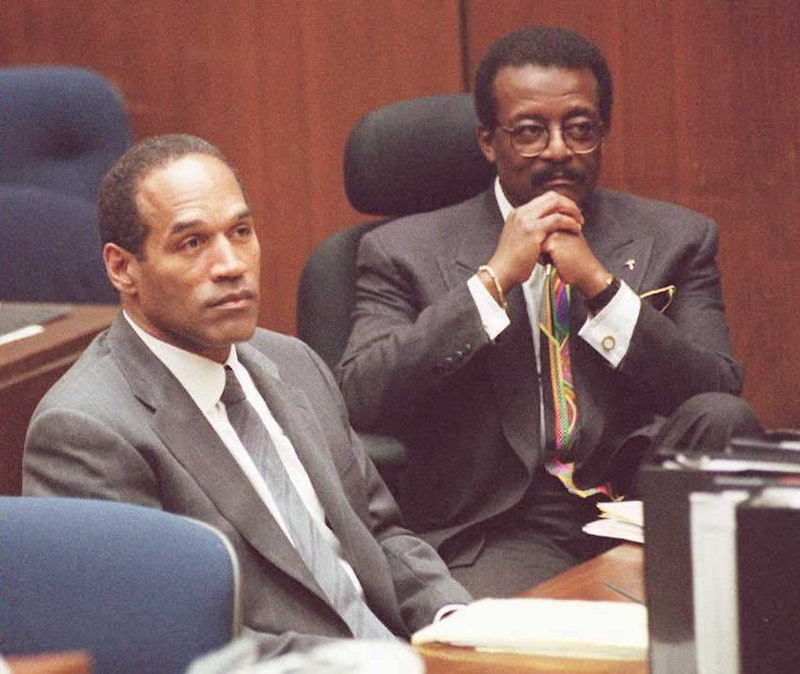 After 10 riveting episodes that focused on various aspects of the trial of the century, the season finale of The People v. O.J. Simpson: American Crime Story depicted the moment Simpson was found not guilty of the murders of his ex-wife Nicole Brown Simpson and Ronald Goldman. Even though we already knew the trial's outcome, the April 5 episode "The Verdict," did a fantastic job of depicting the tension and anxiety in the courtroom on Oct. 3, 1995. Following the verdict, the series also portrayed public reactions to Simpson's acquittal and they illustrated a significant racial divide.

On the show, a crowd gathers outside the courthouse and is shown celebrating the verdict and chanting Simpson's name. As Gil Garcetti, Marcia Clark, and Chris Darden sit together processing the acquittal and preparing to face the press, they can hear the cheers in the background. Later, Clark expresses her disbelief to Darden that, "People are celebrating [Simpson], celebrating the verdict." And, regardless of your own opinion of the verdict, it's certainly jarring to hear and see such wild celebrations when the victims' families are clearly in incredible pain. Here is actual footage from that day, showing reactions both outside the courthouse and in Simpson's Brentwood neighborhood:

When Simpson returns to his predominantly white Brentwood neighborhood on American Crime Story, a frenzied crowd is shown once again — but these individuals are protesting the verdict rather than celebrating it. "What the hell are they doing here? I was found not guilty. That's some bullsh*t," he tells Robert Kardashian as he watches protesters wave signs claiming he's a guilty man.

That evening, Simpson throws a self-described "rager" at his home and decides to bring the party to the Riviera Country Club — only to be told by his son that the club doesn't have room for them. Based on this video footage of public reactions, it appears that American Crime Story was spot-on when it depicted how people reacted to the acquittal — downtown L.A. and Brentwood were essentially two different worlds with two vastly different views regarding the verdict.

Everyone was waiting with baited breath for the verdict, but the acquittal elicited a wide range of reactions, including jubilation, vindication, sadness, and anger. The below compilation shows Americans of different races all over the country reacting to the highly-anticipated verdict:

Amidst the pandemonium, some statements emerge from these clips that explain why people may have responded so differently to the verdict. "O.J. helped expose corruption in the police department," one black man explained, adding that he sympathized with the families of Nicole Brown Simpson and Ron Goldman. He was most likely referring to the Fuhrman Tapes, which proved that one of the first detectives on the scene had used racial slurs and expressed hatred towards the black community.

However, nothing is clear-cut — although there's no denying the racial divide, other black Americans did declare to the TV cameras that they believed Simpson to be guilty. "I mean, I thought they were going to find him guilty because they took over a year for this outcome to happen," one man told reporters. "You can't just deliberate for three hours or even a day and come out with this conclusion... So I think this needs to be reviewed because this makes the whole legal system look like a joke to me and I'm really disappointed in the way this all came out."

Still, the overall divide was clear. "It's a miscarriage of justice and I'm ashamed to be an American right now because the guy is so guilty it's disgusting," a white man claimed to reporters. "That jury should be ashamed of themselves for that verdict they brought in." The below video from the Associated Press further illustrates the disparity of reactions to the verdict:

Surprisingly, The Washington Post recently reported that, in 2016, black and white Americans agree more than they ever have when it comes to the Simpson case. "A majority of both sides agree that he was at least 'probably guilty,' and never before have black and white Americans been closer to agreement," the newspaper reported in March. According to a poll from The Washington Post and ABC, 83 percent of white Americans believe Simpson is "probably" or "definitely" guilty, compared to 57 percent of black Americans.

In its final episode, American Crime Story did a great job of conveying the racial divide in the country and, given the season-long focus on Fuhrman and a history of racism faced by the black community — especially in Los Angeles— the series provided excellent context as to why that divide existed in the first place.