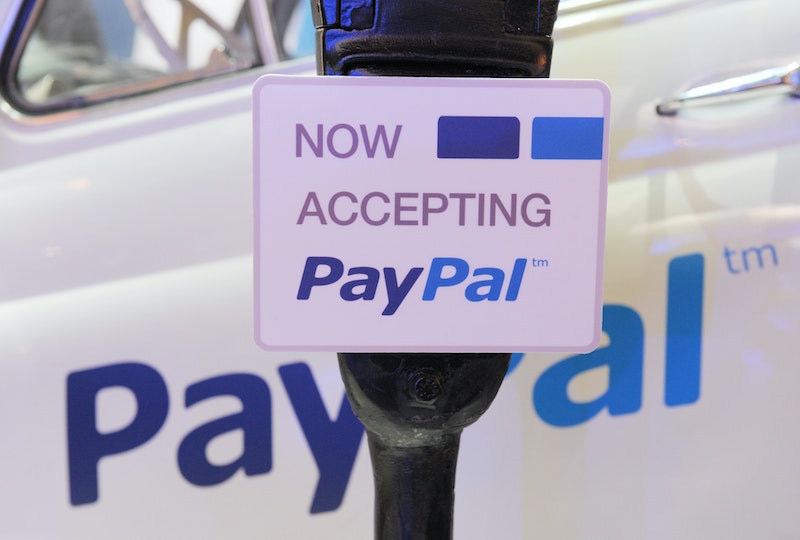 Don't look now, but the Tar Heel State is already paying the economic price for its dismal new anti-LGBT law. Paypal is standing up against discrimination in North Carolina, scuttling its plans to build a new operations center in Charlotte. It's one of the earliest, biggest indications of just what a disastrous financial decision the state's government made in passing the law, to say nothing of the profound moral injustice. Thanks to the law, signed by Governor Pat McCrory in March LGBT North Carolinians are no longer afforded anti-discrimination protections, and transgender residents of the state are now legally forced to use the wrong bathrooms.

According to a statement released by PayPal CEO Dan Schulman on Tuesday morning, the company will be changing its plans to bring 400 new jobs into North Carolina, which according to the AP would've amounted to a $3.6 million investment in the state. In other words, the people McCrory is charged with governing are now paying the price for his choice (and the choice of Republicans in the state legislature) to enable discrimination through the law. Here's Schulman's statement (he also expressed regret that the company wouldn't be able to "count as colleagues the skilled and talented people of the region"):

Two weeks ago, PayPal announced plans to open a new global operations center in Charlotte and employ over 400 people in skilled jobs. In the short time since then, legislation has been abruptly enacted by the State of North Carolina that invalidates protections of the rights of lesbian, gay, bisexual, and transgender citizens and denies these members of our community equal rights under the law.

The new law perpetuates discrimination and it violates the values and principles that are at the core of PayPal’s mission and culture. As a result, PayPal will not move forward with our planned expansion into Charlotte.

This decision reflects PayPal’s deepest values and our strong belief that every person has the right to be treated equally, and with dignity and respect. These principles of fairness, inclusion and equality are at the heart of everything we seek to achieve and stand for as a company. And they compel us to take action to oppose discrimination.

Our decision is a clear and unambiguous one. But we do regret that we will not have the opportunity to be a part of the Charlotte community and to count as colleagues the skilled and talented people of the region. As a company that is committed to the principle that everyone deserves to live without fear of discrimination simply for being who they are, becoming an employer in North Carolina, where members of our teams will not have equal rights under the law, is simply untenable.

While we will seek an alternative location for our operations center, we remain committed to working with the LGBT community in North Carolina to overturn this discriminatory legislation, alongside all those who are committed to equality.

We will stand firm in our commitment to equality and inclusion and our conviction that we can make a difference by living and acting on our values. It’s the right thing to do for our employees, our customers, and our communities.

This is a big shoe to drop, but it's not the first indication the governor has been given about just how badly he screwed things up for his state. On Saturday, Pepsi CEO Indra Nooyi wrote a letter to McCrory, protesting that the law was inconsistent with her company's standards and urging him to reverse course, and the NBA has hinted that it might pull out the 2017 All-Star Game, which is currently slated to go down in Charlotte next year.

Obviously, businesses boycotting a state like this isn't without controversy or potential downside. After all, it hurts the economy of the state, and therefore the people of the state — almost all of whom have no power over the law and many of whom either oppose it or are themselves victims of it — pay a price too. That said, it's also pretty clear that feeling these economic hits are effective means to make McCrory and the North Carolina legislature think twice about the terrible course they've put their state on, and reconsider passing any more retrograde and nakedly bigoted bills in the future.