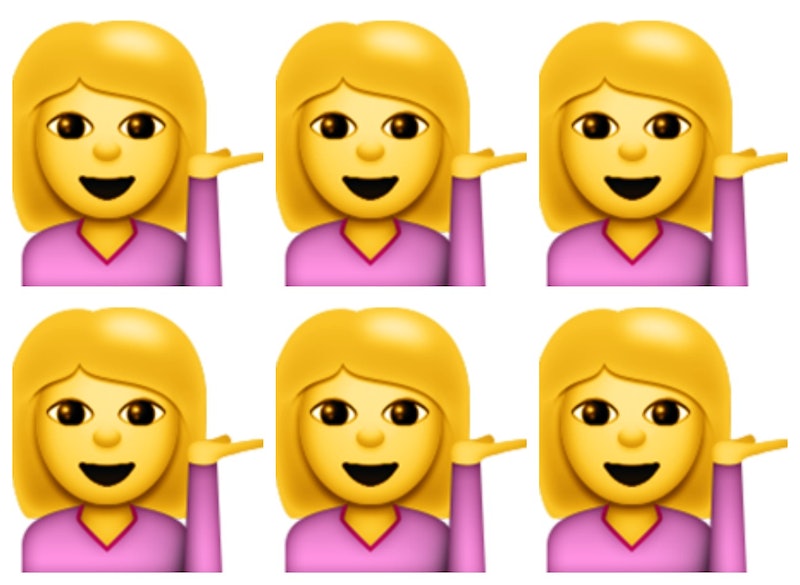 There are plenty of emoji we still don't know the true meaning of or origin behind, but there's one in particular that has stumped smartphone users for quite some time: What does the pink lady emoji mean? There are a handful of theories out there, and people have used her in several different contexts. In some ways, the ambiguity is kind of nice; regardless of how you use it, no one can really tell you you're wrong. Is it saying "Meh, I don't know," or perhaps is it more of a "Sucks to be you!" type of thing? Everything is generally still up in the air, although Unicode has confirmed that there is, in face, an official meaning: The pink lady emoji is an "Information Desk Person." Still, though — how many other things do you think she could mean? Answer: A lot.

Case in point: One Facebook user has a new theory about the pink lady emoji that will seriously blow your mind, calling into question not only the emoji's official name, but basically everything we've ever thought to be true in life. I don't even know who I am anymore, because according to Mic, this theory states that the pink lady is possibly the partner to the haircutting emoji.

But we're getting ahead of ourselves. Let's break down the various meanings of this gal, because she's a lot more multi-purpose than you might think.

1. The Truth: The Information Desk Person

Let's start with what Unicode says. I always thought that the pink lady looked like she was carrying a tray of invisible drinks, but it helps if you see the emoji as it displays on the HTC Sense 7: Things become a lot cleared when she has her own little emoji desk. Look at her. She is simply bursting with information.

All right, so here's the latest theory to rock everyone's world. There's an emoji of a similar looking woman getting her hairs cut with an impossibly large pair of scissors. Then we have the pink lady emoji — the same woman... with a shorter hairdo! As the Facebook user to whom Mic draws attention notes, this implies a type of before-and-after pairing of photos of this little lady pre- and post-haircut.

This theory makes pretty good sense. You have to admit that this sassy lady, flipping her hand in the air like she just don't care, comes across as having a slight 'tude. A more acceptable version of this theory is the half shrug: You use it when you don't know the answer to someone's question, but you're too lazy to raise both hands in the air.

This one is a lot more involved; but as one Twitter user explained in back in 2014, it definitely fits. Could the collection of pink lady emojis perhaps be telling the story of a wedding, and its not-so-happily-ever-after ending? Just look. The wedding starts out all peachy and the bride is so excited — but by the end, things have taken a turn for the worst. Yikes.

Is your universe unraveling? Are you starting to wonder if every single emoji is part of a larger story? Me too.