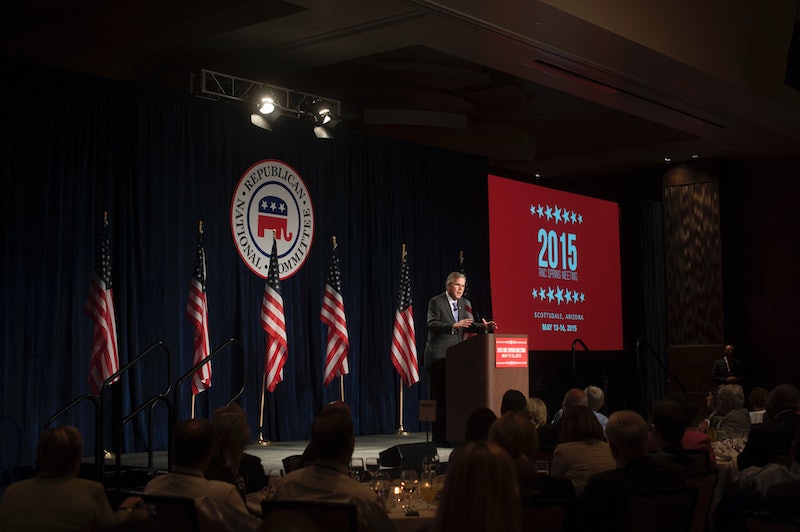 Rule 40B sounds like a code from a Jason Bourne movie, but it's really an esoteric edict from the Republican National Committee that's slowly coming to public attention as the possibility of a contested convention looms in July. What is Rule 40B? The Republican convention could be affected by it, as the rule mandates eligibility for the nomination based on how many states a candidate has won. It could be the key to Donald Trump's nomination.

According to the political blog Frontloading HQ, Rule 40 is a relatively new addition to the Republican rule book that was aimed at protecting a potential President Mitt Romney during a 2016 re-election bid. "The rules that Republican lawyer, Ben Ginsberg pushed through the Rules Committee and were ultimately adopted at the convention protected hypothetical future President Romney in several ways, but one of them was increasing the thresholds a candidate had to meet to have their name placed in nomination at the convention," write Josh Putnam, who runs the blog.

Instead of just having to win five states like the 2012 candidates did, the rules for the 2016 convention mandate that a candidate must win eight states before they can enter their name for the nomination at the convention. Furthermore, a candidate didn't just have to win the most delegates in that state, but they had to win the majority of the delegates in that state for it to count under Rule 40B.

If neither candidate massively sweeps the few remaining primaries, both John Kasich and Ted Cruz would be subject to this rule. So far, the Ohio governor has only managed to win his home state, although he took second place behind Trump in New Hampshire, Massachusetts, and Michigan. Cruz has won the popular vote in more than eight states, but he's only received the majority of the delegates in four, meaning he too would be disqualified under the new rule.

In Trump's ideal world, Rule 40B would be invoked at the start of the convention and he would walk unopposed on the main stage to accept the nomination. However, as RNC communications director Sean Spicer stressed during an interview on CNN's New Day Tuesday morning, the rules of the convention are only temporary. "I think there is a lot of conversation about 40b," Spicer told host Chris Cuomo. "If you keep going down the list, you get to 42, which says all the rules in this convention or for this convention are temporary."

Now that's both a potentially good thing and a potentially bad thing, depending on what outcome you are hoping for from the national convention. The delegates on the Rules Committee for this convention will set the new set of temporary rules, and they could absolutely change the rulebook so as to not include Rule 40B. However, members of the Rules Committee, one man and one woman from each state, are elected at the state delegate conventions. So far, Trump has won most of the delegates in most states, and those elected to the Rule Committee could push rules for the convention that are favorable to Trump. Just as the rules were shaped around Romney's potential second bid in 2012, they could be formatted to secure Trump's nomination this year.

If Rule 40B, in its current form, is invoked during the Republican nomination process, it will likely mean the end of Kasich and Cruz's 2016 campaigns before the convention even really begins, which is another compelling reason to keep the rule out. After the craziness of the primary season, people are now expecting a thrilling and dramatic convention, and Rule 40B would pretty much kill that. Whatever happens, the convention is bound to be one of the most talked about in years.