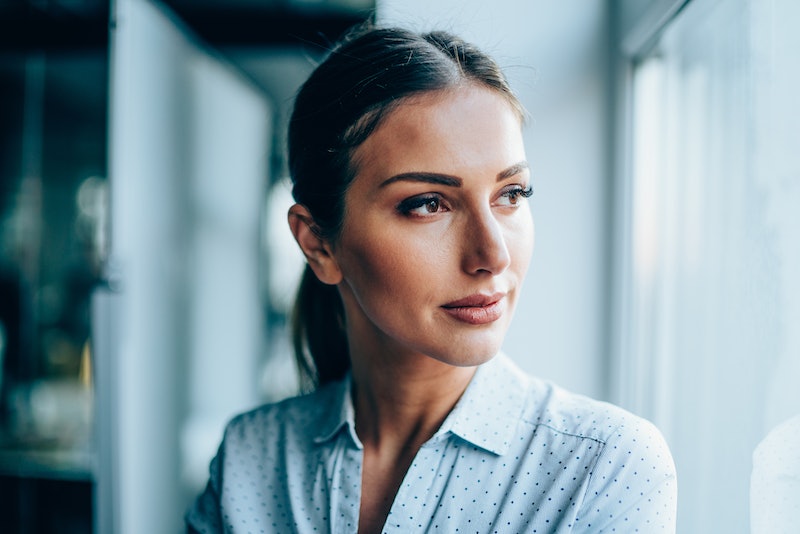 A lot of people have the misconception that if they're not the victim of physical violence, then they're not truly victims of abuse. Nothing could be farther from the truth. There are signs your partner is mentally abusive (also called emotionally or psychologically abusive) that have little to nothing to do with physical violence at all. In fact, as a Domestic Violence Victim Advocate and Planned Parenthood Certified Responsible Sexuality Educator, the majority of abuse victims I worked with reported that their partner's were never physically violent. "But they never hit me or anything" is something I heard on a daily basis.

While physical abuse can be deadly, mental and emotional abuse can ruin lives as well. It can completely erase someone's personality, erode their self-esteem, ruin all their other relationships, cause depression and anxiety, and you never know if the abuser will escalate to violence. Basically, it makes someone a prisoner of both the abuser and of their own sadness, fear, and hopelessness. Even though no one is being hit (yet), mental abuse isn't a less serious type of abuse.

Here's another scary thing about mental and emotional abuse: it can be happening to you without you even realizing it. No matter who you are. Some abusers are that sneaky and that good. Look for these signs to see if your partner is abusing you with their words and actions.

One of the most common tricks of a mentally abusive partner is to isolate their victims from the rest of the world. This can look like moving to a far away place, convincing you your family is no good, or forbidding you to see your friends. Eventually you become dependent on them for all of your social needs.

Someone who truly loves you in a healthy way would never tell you that you're worthless or call you names. This is one of the clearest, most obvious signs of abuse, but also one we often miss. That's because name calling can start out playfully in the beginning of a relationship, and turn mean so subtly that you're almost too used to it to notice.

Maybe your partner does't hit you, but threatens to. These threats can be through words, or through actions. Abusers also commonly threaten the families, friends, and children of their victims. Threats are very serious, because they always have the potential to become a reality.

When you have an abusive partner, you never know what you're going to get. Are they coming home in a good mood or a terrible mood? Will the fact that it's raining make them mad enough to start a fight with you? If you worry constantly about things upsetting your partner and you're literally never sure how they'll react, that's a red flag.

The truth is that neglect has many forms. Your partner can refuse to talk to you, withhold affection, or disappear for days at a time. Or they can block your access to food, not let you have the supplies you need for basic self-care, or leave you without power and water. Abusers love to take things away from people.

I'm not talking about the little "oh, who is that?" question that we are all capable of. I'm talking about not even being able to look at your waiter without getting accused of cheating. In fact, you don't even have to ever leave the house to be constantly accused of infidelity. Jealousy can also be worded in a way that the abuser convinces you it's for your own protection. Like "you can't dress like that because people can't be trusted."

If you've never heard of gaslighting, it's a manipulation technique abusers use to make you doubt your own mind. Your abuser will say something or do something, then convince you they didn't, or that they said or did something else, to the point where it's a known thing that you can't be trusted to remember things correctly. It can be so severe that it makes you doubt your sanity.

Sometimes abusers put on a big show of acting like they feel guilty for the bad things they've done. What they're really doing is manipulating you into feeling bad for them, and even forgiving them or nurturing them. Don't fall for this power play.

One of the reasons it's so hard to leave abusive relationships is that the abuser often keeps tight control of the finances. If there's no money, and the abuser doesn't let their victim work or go to school, it becomes increasingly difficult to leave. Both partner should have access to the money, even if one person is mostly in charge of it.

Ultimatums are threats that force you to do something or face terrible consequences. The most common one is "if you leave me, I will kill you." Abusers can also use ultimatums like "if you don't quit your job, I'll take your kids away and you'll never see them again." Or "if you don't take me to buy beer, I'll never give you another cent as long as you live." They're another form of control and manipulation.

If your partner disrespects the commitment and promises you made to each other with multiple affairs, it can be red flag for abuse, especially if your partner makes no attempt to hide it because they think you cannot or will not leave. Some abusers also force you to participate in their sexual escapades against your will for their own pleasure. This is never OK.

In an abuser's mind, if you don't have transportation, you can't leave them, go cheat on them, or do something you're not supposed to be doing. They could make sure you don't have a car, move to a place with no public transportation, or just keep you isolated in a remote location. Any attempt to control your freedom can be a red flag for mental abuse.

If your partner uses criticism as a form of abuse, then you'll live your life constantly wondering if you really can't do anything right and if everything really is your fault. It's a harsh blow to the self-esteem and it's a technique used to wear victims down so they're less likely to think they deserve better.

Are there a set of spoken or unspoken rules about how you are supposed to live your life or how the house should be run? Does everything have to be spotless before the abuser gets home? Do you have to have dinner cooked a certain way by a certain time? Are you only allowed to grocery shop on weekends and only if your partner is with you? Excessive rules are a common means of exercising power and control.

Some abusers find that their abuse is pretty constant. Others find it comes in waves, in a predictable cycle. The abuser rules over his partner like a tyrant, then buys gifts, makes sweeping apologies, and promises it will never happen again. The truth is, is pretty much always happens again, and it only gets worse over time.

When a mental abuser senses you're going to leave, they often play the suicide card. The "if you leave me, I will kill myself" or "I can't live without you" card. They want you to feel like leaving them would be a terrible choice with deadly consequences that you'd have to live with for the rest of your life.

If you walk on eggshells for fear that something you do or say will make your partner mad, it's a giant red flag. You should never live in fear that the everyday actions of loving your life will cause someone to blow up at you, scare you, or hurt you.

Manipulation is one of those things that's tricky to describe, but it's basically someone getting you to do something you wouldn't normally do, usually by convincing them you it's a great idea. A manipulator uses you like a chess piece to get what they want.

Grown adults don't have to ask permission to use the phone, eat, leave the house, watch TV, or buy little things. If you have to get pre-approval before you do anything, especially things that involve you leaving the house, that's someone using power and control to keep you under their thumb.

Yes, you have problems in your relationship, but according to your abuser, they're all your fault. in fact, it's your fault with anything bad happens, even when you run out of toilet paper. Because if you knew how to grocery shop, that wouldn't have happened. Even things you have no control over, like your abuser losing their job, somehow end up being your fault.

Abusers tend to paint rosy pictures of themselves that are all lies. Some abusers may have frightening pasts, whole other families, and hidden lives that you don't even know about. They use lies as a way to control the information you have about them, and about your lives together in general. They can lie about huge issues or just common everyday little things that there's not even any reason to lie about. But if you call them out on their lies, they become incredibly angry.

When your partner is thirsty, do you have to get up and them a drink? Not because you want to, but because you know you have to? Are you basically a servant when it comes to housework? Do you have no say if and when you have sex? These kinds of demands are common in emotionally abusive relationships.

Even though this is a long list, it barely scratches the surface when it comes to signs you could be in a mentally abusive relationship. Use your own happiness, and the opinions of those close to you, as a starting point for assessing your situation. If you need help, call the National Domestic Violence Hotline to be connected with resources in your area.