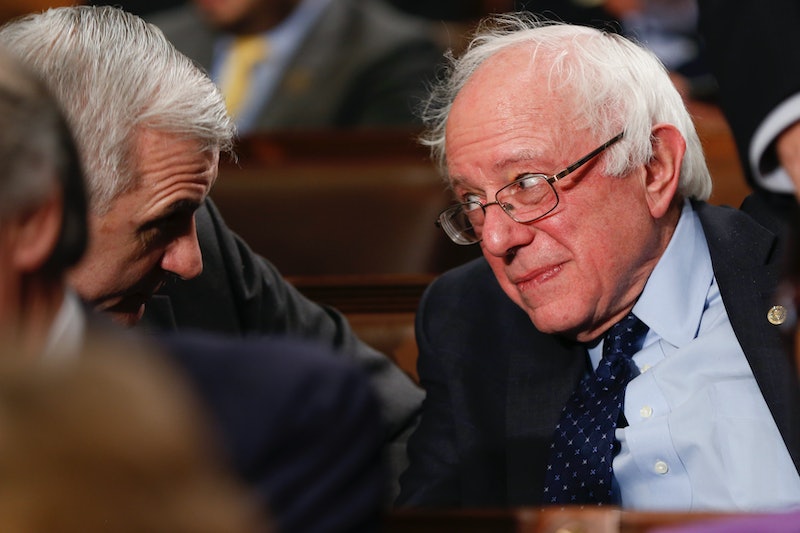 Late Monday night, The New York Daily News released an extensive interview with Sen. Bernie Sanders, which earned him some criticism for what many considered an underwhelming delivery of vague platitudes in lieu of concrete policy. In particular, there's Sanders' answer to a question about the open legal case involving the victims and their family of victims of the 2012 shooting at Sandy Hook Elementary School in Newtown, Connecticut. Some are questioning his progressive, or even Democratic, credentials.

Sanders told NY Daily News that while he supports a ban on assault weapons in the United States, he maintains that he doesn't believe "victims of a crime with a gun should be able to sue the manufacturer," and likened the situation to a "gun-dealer" being sued for "selling [someone] a legal product that he misused." Although he said that the Sandy Hook case wasn't entirely "baseless," he did call it a "back-door way" to gun control legislation. The case they're talking about (Soto et. al v. Bushmaster) looks very specifically at one legal assault weapon model: the AR-15. Called "America's rifle," this is a weapon that's been considered a "favorite" of mass shooters.

Ultimately, Sanders' remarks led Sen. Chris Murphy of Connecticut to criticize the Democratic presidential hopeful on Tuesday, declaring that, "Democrats cannot nominate a candidate who believes that toy gun makers should be held to a higher legal standard than real gun makers." On his Twitter, Murphy shared a screenshot from the interview, calling the answer "really bad" — and I'm going to have to agree. Bustle reached out to both Sen. Murphy and Sen. Sanders, but had not heard from either by the time of publication. Bushmaster's parent company, Remington, also did not respond to Bustle's request for comment.

According to court documents obtained by Bustle, the Sandy Hook case argues that the AR-15 — the weapon used in the Sandy Hook shooting that killed 26 people (20 of them small children) — is a military assault weapon capable of delivering 30 rounds in 10 seconds and penetrating body armor, designed to "deliver maximum carnage with extreme efficiency." The complaint argues that Bushmaster and its parent company, Remington, were perfectly aware that "as a consequence of selling AR-15s to the civilian market, individuals unfit to operate these weapons gain access to them." The complaint also argues that the companies' marketing toward "military wannabes" and partnerships with games like Call of Duty show a disregard for the very real dangers of these weapons being commercially available.

Plaintiffs Mark and Jackie Barden — whose seven-year-old son Daniel was killed at Sandy Hook — criticized Sanders' stance on their lawsuit earlier this year in an op-ed for The Washington Post. The Bardens said that Sanders understanding of the litigation was "simplistic and wrong," and called for a more thoughtful approach from the senator to this particular breed of corporate responsibility:

... History has shown us, time and again, that it is innocent civilians in malls and movie theaters, and children in their classrooms, who have been made to bow down to the singular power of a gunman wielding an AR-15.

This is not a theoretical dispute. The last thing our sweet little Daniel would have seen in his short, beautiful life was the long barrel of a ferocious rifle designed to kill the enemy in war. The last thing Daniel’s tender little body would have felt were bullets expelled from that AR-15 traveling at greater than 3,000 feet per second — a speed designed to pierce body armor in the war zones of Fallujah.

Sanders has spent decades tirelessly advocating for greater corporate responsibility, which is why we cannot fathom his support of companies that recklessly market and profit from the sale of combat weapons to civilians and then shrug their shoulders when the next tragedy occurs, leaving ordinary families and communities to pick up the pieces.

If the Sandy Hook parents are able to see this case in court, it would be a major moment for critics of the 2005 Protection of Lawful Commerce in Arms Act (PLCCA), which made it pretty much impossible to go after gun manufacturers and distributors for negligence. Sanders helped to pass this law, and yet he has since pledged to help repeal it. However, separately condemning assault weapons while refusing to support the victims of those weapons in their fight for injunctive action leaves a bad taste in my mouth. Arguing that increasing accountability for manufacturers will somehow end the gun industry only adds to that concern.

Statements like this continue to place Sanders on the outs with anti-gun activists, as he consistently comes out against those seeking to hold manufacturers accountable for marketing these (technically legal) killing machines. That's a stance that I'd ask any politician to reconsider.