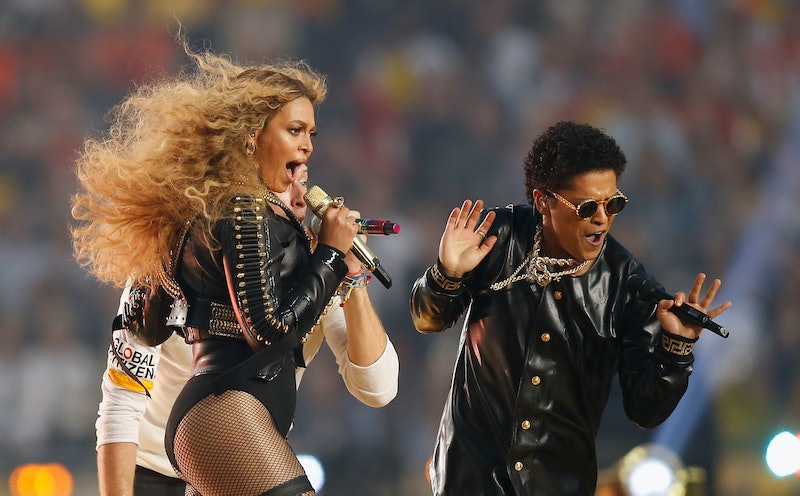 The queen has officially spoken. Beyoncé, the official queen of the Beyhive and the music world, has finally spoken out about her “Formation” video, and the backlash that erupted after it was released. Backlash that, specifically, in the days after her Superbowl performance, involved critics calling the video and her performance "anti-police." In the most recent issue of Elle, the singer tackled her haters head on, and what she had to say is exactly what the world needs to hear.

In the interview, the singer took on those who called her “Formation” video "anti-police." According to The Washington Post, the criticisms against the singer and her video were initially sparked in response to the video's images of New Orleans post-Hurricane Katrina (in one shot, Beyoncé is sitting on top of a police car submerged in water). In response to these images (and her Superbowl performance), some critics called for an anti-Beyoncé rally outside of the National Football League headquarters in New York City. The invitation to the boycott named Beyoncé’s performance and video “a slap in the face to law enforcement.”

Beyoncé’s response to these critics raised a very important point. In the exclusive interview with Elle, she says, "anyone who perceives my message as anti-police is completely mistaken. I have so much admiration and respect for officers and the families of officers who sacrifice themselves to keep us safe. But let's be clear: I am against police brutality and injustice. Those are two separate things."

All hail, Queen Bey, because she gets it totally right in this case. It’s important that we separate these two conversations in order to continue to have a productive conversation about how to end police brutality in this country. This sort of lumping together of two separate things is just distracting the world from the tough conversations it needs to be having about police brutality and race. So, I’m relieved that Beyoncé is finally responding to the backlash and doing so in such an eloquent and accurate way. Let’s all get back to the serious issues at hand, please, and, in the meantime, return to worshipping Beyoncé for the god that she is.

More like this
Olivia Rodrigo’s Song Dedication To 5 SCOTUS Justices Sent A Strong Message
By Grace Wehniainen
What Is Ariana Grande's Net Worth? When It Comes To Money, She Has No “Problem”
By Hugh McIntyre
Lily Allen Was “Quite Emosh” After Performing Sober At Glastonbury Festival
By Stephanie Topacio Long
Twitter Is Still Flying High After McFly’s Glastonbury Set
By Sophie McEvoy
Get Even More From Bustle — Sign Up For The Newsletter