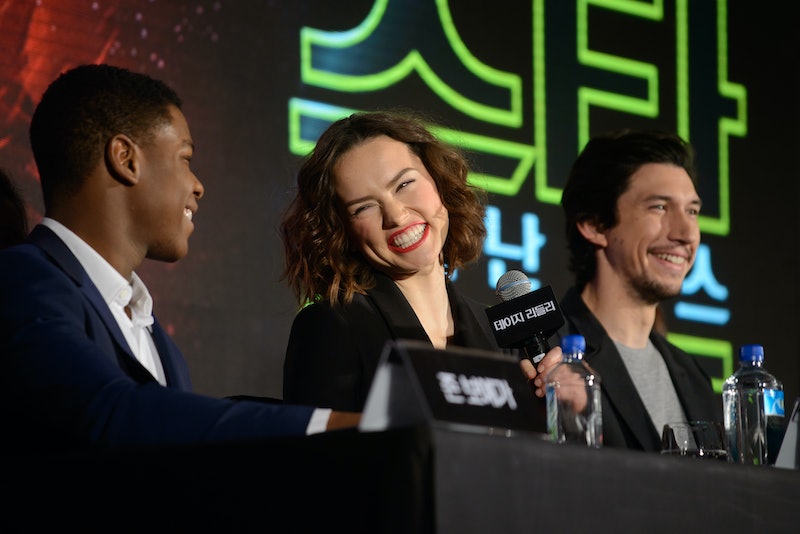 It's safe to say that on the evening of April 9, the cast of Star Wars at the 2016 MTV Movie Awards looked more impeccable than ever. Well, at least the folks who showed up. And by folks, I mean Daisy Ridley. It's quite a surprise that the majority of the cast was missing from the red carpet, considering Star Wars: The Force Awakens was nominated for 11 awards — aka the most of any film at this year's ceremony.

The movie itself was even a contender for the top prize, Best Movie Of The Year, and many of the Star Wars cast members were also nominated individually. Daisy Ridley was up for two awards: Best Female Performance and Breakthrough Performance, alongside her co-star John Boyega. Meanwhile, Adam Driver was nominated for Best Villain for his endearingly emo performance as Kylo Ren.

Since the movie was released in Dec. 2015, the whole cast has been on a whirlwind press tour, literally from Los Angeles to Tokyo. As for Ridley, she clearly honed her red carpet style along the way. And since the MTV Movie Awards are known for bringing out some wild fashion from attendees, it's nice to see the Star Wars queen having fun with her look, too.

The 24-year-old stunned in a simple checked mini that was equal parts retro and contemporary. She looked beyond precious, but simultaneously badass.

Although Ridley was riding solo for the night, Star Wars took the prizes for for Movie Of The Year, Breakthrough Performance (for Ridley herself), and Best Villain. But is anyone all that surprised?

More like this
Most Comfortable Underwear For Big Butts
By Audrey Williams
Gemma Owen’s Swimwear Line Is The Real Winner Of 'Love Island'
By Frances Stewart
Every Horror Movie Reference In The 'PLL: Original Sin' Premiere
By Alyssa Lapid
42 Black Owned Fashion & Beauty Brands To Support Today & Always
By Mekita Rivas, Shea Simmons, Kui Mwai and Dominique Norman
Get Even More From Bustle — Sign Up For The Newsletter