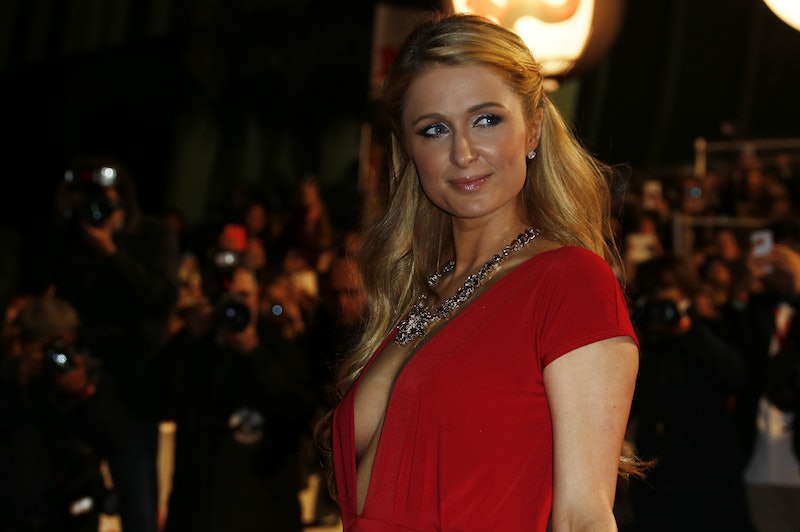 On Monday, a photo began circulating on Twitter reminding the world of another one of Donald Trump's questionable acquaintances: Paris Hilton. Though it may seem like an odd throwback to even mention, in the early 2000s, Donald Trump launched the socialite's modeling career when he signed her with Trump Model Management.

Trump Model Management, you ask? Is this another failed Trump business like Trump Steaks or Trump University? In fact, it is not. Surprisingly enough, ABC News reports that Trump Model Management has been a profitable Trump venture. Unsurprisingly, however, ABC News also reports the agency is currently being sued. A former model claims the agency lured her from her home-country of Jamaica, but treated her "like a slave" once she arrived in the U.S.

However, Trump did not treat all of his models poorly, which would explain why the Twitter photo in question shows a quote by Donald Trump on the back of Hilton's 2006 book, Confessions Of An Heiress. Trump says, "I have known Paris Hilton for much of her young life and have always recognized her as a great beauty. What people don't know is that she is a great beauty on the inside as well."

This quote on the back of Hilton's tongue-in-cheek memoir is unsurprising in content — does Trump even know how to talk about a woman without mentioning her looks? No, not from what I can tell.

Though Hilton is a longtime acquaintance of Trump — she is the daughter of Kathy Hilton, a close friend of Trump's — she is not the only Trump Model Management model who Trump is close with. In fact, Trump's wife, Melania Trump, previously modeled for his agency.

However, Hilton's connection to the current GOP frontrunner brings to light a question raised in a recent New York Times article, who are Trump's friends? According to the candidate himself, he doesn't have any. The New York Times quotes Trump as saying, "I have no friends, as far as I'm concerned."

The Donald might not want to admit it, but the tweet including Trump's endorsement of Hilton's book brings up a worthwhile point. Trump may say he has no friends, but in reality, he simply does not have anyone who he deems a presidential friend. This cannot come as a shock when you're a model-agency-owner-come-politician. But really, if Donald Trump can run for president, who's to say Paris Hilton wouldn't do just fine as a cabinet member?

More like this
Police Shove 'Full House' Star Jodie Sweetin At An Abortion Rights Protest
By Radhika Menon
For These Abortion Clinic Volunteers, Going TikTok Viral Is A Risk Worth Taking
By Audra Heinrichs
YouTuber Runs Into Margaret Sanger’s Grandson While Filming
By Alexis Morillo
Every Single Big & Small Way You Can Fight For Abortion Rights
By Tess Garcia
Get Even More From Bustle — Sign Up For The Newsletter