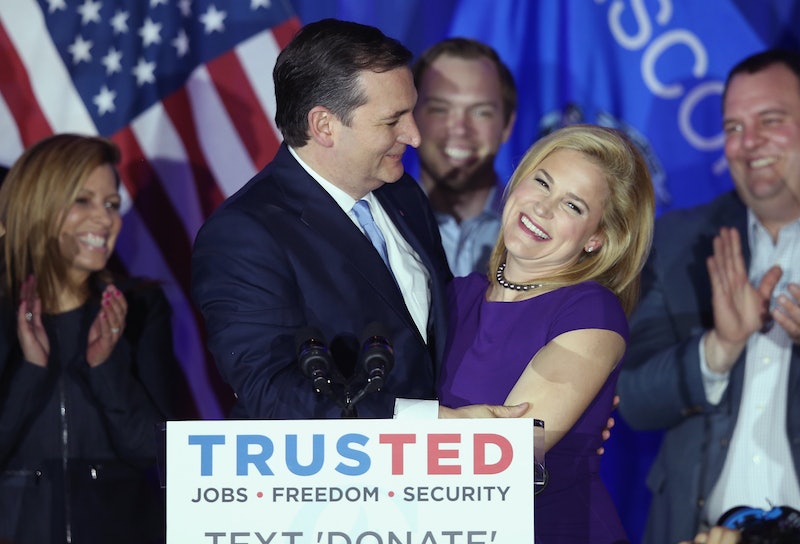 On Tuesday night, Ted Cruz claimed his primary win in Wisconsin and said it was a "victory for every American." But Cruz paid special attention to a particular group: women. Perhaps in an attempt to decrease the gender gap in November — or just in hopes they'll help him beat Trump in the primary — he focused a good share of his speech on American women. He gave a shout-out to union women (ironically?) and working moms, especially his own. But then he said something that sounds good at first but just doesn't sit right the more you think about it: "Strong women in the United States can accomplish anything."

In context, he was speaking about his wife Heidi, who Trump attacked in the days leading up to the Wisconsin vote:

She's the child of missionaries, my best friend in the world, and she's become a successful business leader, a loving Mom. And every day, she's teaching our daughters, Caroline and Catherine, that strong women can accomplish anything in the United States of America.

Yes, strong women can accomplish anything, but wouldn't it be a great if Cruz were worried about the women who don't remind him of his wife? Not just the investment bankers who have served in the upper echelons of Washington circles like Heidi, but women around the country who are actually stronger for overcoming adversity.

It might be great message if Cruz was campaigning to raise the minimum wage like Hillary Clinton and Bernie Sanders. More than half of all minimum wage workers are women. These are the "working moms" that he mentioned, and they're not getting paid a living wage. It's hard to meet Cruz's version of "strong" when you're being undervalued for your work.

Fair pay problems don't stop at $7.25 an hour. Cruz is also against equal pay for equal work higher up the income ladder. He voted against the Paycheck Fairness Act in 2014 and called Obama's executive order banning salary secrecy for federal contractors a distraction from more important issues. The pay gap affects black and Latina women even more than their white counterparts.

It's even harder to be a strong woman and make your own decisions when the government won't let you. You can't "accomplish what you want," when the law won't let you. Cruz thinks that abortion should be illegal — even in cases of rape and incest. He has even called contraception "abortion-inducing drugs."

He's also against same-sex marriage; he called it "fundamentally illegitimate, lawless, and unconstitutional." Well, sorry, Ted, some strong women want to marry other strong women. His stance on transgender issues is even more appalling — and he would certainly stand in the way of strong trans women reaching their full potential.

So no, Ted Cruz, you cannot speak about strong American women when your policies would be everything but empowering. Women can accomplish anything they want in America — but some have it a hell of a lot easier than others. You should be creating more opportunities and not standing in the way of a more just and equal United States.

Cruz quoted John F. Kennedy (again, I ask, ironically?) in his speech, "We are not here to curse the darkness but to light the candle that can guide us to see through that darkness to a safe and sane future." And so, for the accomplished future of strong women everywhere — let alone a safe and sane one — Cruz cannot and must not be president.