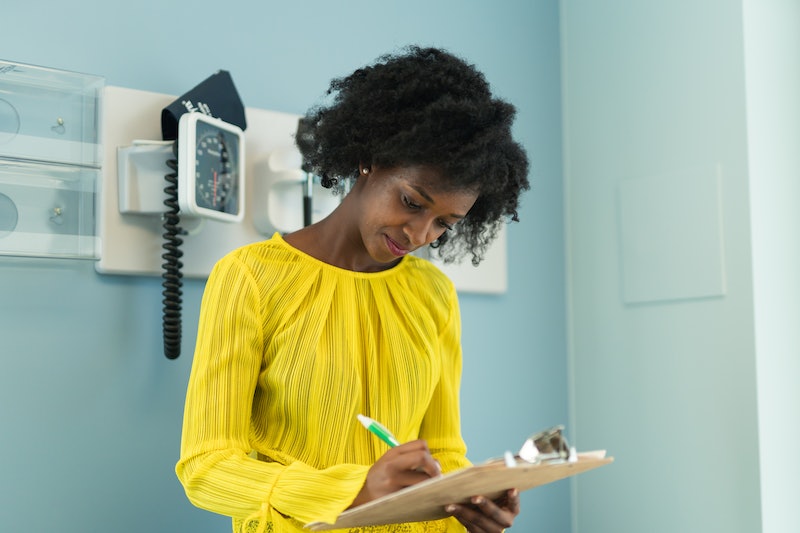 If there's something seriously wrong with your reproductive system, would you be able to detect the signs? Chances are that perhaps there are some gynecological symptoms you'd recognize as being "off," but others may not strike you as particularly bizarre. And that's a big problem; with the five gynecological cancers (cervical, uterine, vaginal, vulval, and ovarian) making up around 10 percent of all new cancer cases diagnosed in women each year, adding up to a whopping 98,000 cases per year in the U.S. alone, it's hardly a small issue. It's not likely you'll have anything serious and I'm not intending to scare you, but it's also important that you have this knowledge up your sleeve so you can get to the doctor pronto if something odd is happening down below.

A slightly terrifying study done of women in 2012 found that many don't actually realize common symptoms of gynecological cancers as problems. Women in the study knew that weird discharge was likely something to be concerned about, as was skin change in the vulva, but didn't identify fatigue, urinary changes, bloating, or serious problems with urination (pain or going far too much) as potential cancer signs. Heads up: they are, and you should get to a doctor for them; even if they're caused by something else, which they likely are in most young women, it's much better to be safe than sorry.

Here are five other symptoms that you should definitely go to a gynecologist or doctor about, ASAP. Don't waste time sitting and Googling or taking painkillers; these could spell serious difficulties.

This is the big sign that something may be going wrong. Irregular vaginal bleeding is basically defined as anything outside the normal realm, from intensely heavy periods in a person who normally has light ones to any bleeding that isn't menstrual. Basically, if you're bleeding and it's not for your period, you need to get yourself to a doctor. A little spotting is fine, particularly if you've just switched birth control, but constant heavy flow, clots, or blood after sex at a point in your cycle when you're not supposed to be bleeding can mean Serious Business.

Unusual vaginal bleeding is a possible symptom of uterine or ovarian cancer or pelvic inflammatory disease, and is also associated with cervical cancer; 90 percent of uterine cancers, for instance, feature it as a symptom. It's important to note that strange bleeding after sex is also considered irregular and needs to be checked out, though it's likely that the cause of that is more benign, like damage to the vaginal lining by friction and dryness; post-sex bleeding is only a sign of cancer in exceptionally rare cases.

OK, you probably know this, but there are specific discharges that are signs of significant problems down below. Green-tinged discharge, for instance, is often caused by STDs; but did you know that certain colors indicate difficulties with your cervix? A yellow color may indicate that you have cervicitis, an inflammation of the cervix caused by infection or injury. Treatment will likely involve antibiotics or antivirals depending on what caused the inflammation, but it's not as dangerous as the other cervical-related discharge: a pale, bloody and foul-smelling one, possibly slightly brown in color. (By "foul" I mean it smells putrid or off, like food that's gone bad, not the slightly fish-like smell of normal discharge.) That's one of the classic signs of cervical cancer, and apparently it sticks around persistently; if you notice anything of that nature for any period of time, make a medical appointment.

3. Persistent Swelling In Your Abdomen

This is specific to ovarian cancer: if you seem to have a "pregnant" stomach that won't go down, no matter what you do, you may need to have your ovaries checked. A swelling in the abdomen that hangs around persistently could be a sign of cancer developing in the ovaries; it's one of the only reliable symptoms for the disease there is, since so often it goes unnoticed until the final stages (it's referred to as a "silent killer"). If there's any history of gynecological cancers in your family, take notice if you seem to have swelling that won't go anywhere, since it's the number one diagnosed sign of this particular cancer.

4. Skin Changes Around The Vulva

Are you familiar with what your vulva normally looks like? Well, grab a mirror and get acquainted, because noticing any shifts in the coloration of the skin or new moles or lesions may be key to catching problems early. Different kinds of cancer of the vulva are often associated with changes in the vulva skin, from a mole to skin thickening or ulcers and lesions. Changes in vulval skin aren't a guarantee of cancer, though; much more commonly, they denote other conditions like dermatitis, thrush, the skin condition lichen sclerosis (which causes itching and white patches), and shifts in hormone levels around menopause or pregnancy. All of those need to be checked out by a doctor, though, so track whatever change you've noticed and take your account to a doctor.

Pelvic pain that won't go away no matter what you do (acupuncture, ibuprofen, hot compresses, prayer) might be a sign of something quite awry in your reproductive system. Persistent pelvic pain can be caused by anything from the gynecological disease endometriosis, where uterine lining cells migrate elsewhere in the body, to uterine tract infections, pelvic inflammatory syndrome, STDs, or fibroids. They may also be a signal of certain types of cancers, particularly vaginal and vulvar ones, while ovarian cancer (along with bloating) might cause pain plus a feeling of "weightiness" in the pelvic area. The potential causes for this particular symptom are pretty varied, but they're all things that need medical attention.

It's important to differentiate this from cramps. Cramps tend to have surges or rise and fall, as the uterine muscles clench; pelvic pain, by contrast, is constant and may be aggravated by movement or sitting in certain positions. It may also occur anywhere in your pelvic region. The Mayo Clinic actually has an excellent online diagnostic "test" about what your pelvic pain might mean as a woman, but you need to remember it's just a general approximation, not a real medical diagnosis.

Don't keep this info to yourself, either. If a friend's complaining of any of these symptoms, tell them to make the call or take them to a clinic, stat. Nobody's gynecological health is worth delaying.