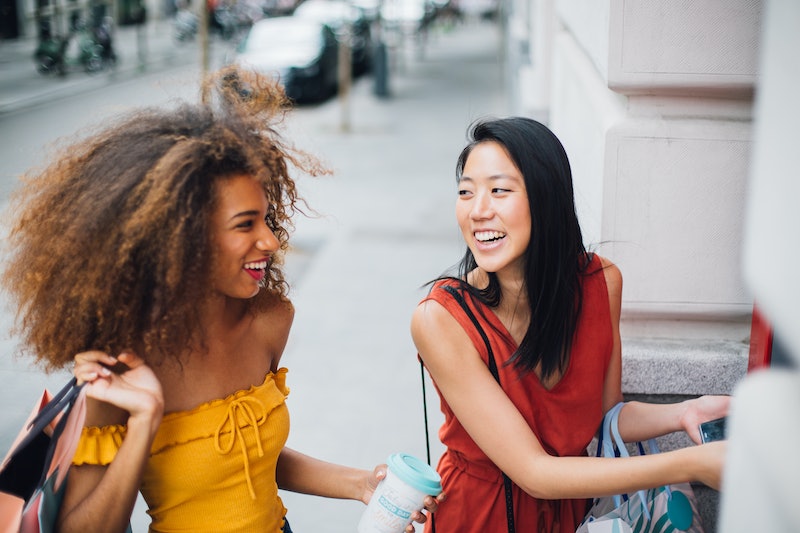 What's the difference between a reasonable friendship and one that's solid as a rock? You may be surprised to know that it's not about years together, or thousands of text messages, or never doing anything to piss each other off. Like romantic relationships, strong friendships are built on the ability to talk to one another, and to genuinely listen when you do. However, there are, beyond that basic principle, some very good signs that you've got a strong friendship going — or, conversely, that things are turning sour and need some radical aid (or to be gently cut off).

Science increasingly validates the value of friendships, particularly for women; they've been linked to higher self-esteem, lower stress, and even longer lives. Doing a friendship properly, in other words, is not a low-stakes endeavor; it may be one of the main sources of health and happiness in your emotional life. And the signs of a strong friendship, or one that needs nurturing, are things to be taken seriously. If you've got friends who tick every item on this list, it's likely time to buy them flowers just for being excellent. (Although if you're so strong together, you probably did that recently anyway.)

Here are seven psychological signs that your friendship is a seriously healthy one with the strength of a raging fire, to quote Mulan.

1. You Can Both Communicate When There's An Issue

Nobody is perfect consistently. But a good friendship is one where you can discuss rubbing each other the wrong way, openly and with respect — instead of sulking, acting like martyrs, guilt-tripping, or other bad friendship behavior.

Most guides to communication tend to zero in on intimate relationships; but resolving conflicts and really listening to each person's issues is just as good a skill, and just as excellent an indicator of health, in a friendship. The Huffington Post's 10 rules on conflict resolution are an excellent way forward if you're not sure you're really listening to your friend when you argue.

2. You're Both Aware Of Boundaries

Is there something they don't want to talk about? Something they don't like doing or find difficult in others? How much contact and closeness do they really want from you? A good friendship is one where people are aware of boundaries, the limits put in place to guard personal comfort and emotional stability. There's space for them (and you) to say no, and it's considered acceptable and reasonable to do so. Sometimes asserting them can be messy, but if you end up in a position where you both know what the other person is comfortable with, and respect it, you're doing well.

3. You're Each Respectful When Offering Support

Support in a strong friendship is nuanced, not just determined by what the person giving the sympathy thinks everybody needs or should hear. Support, in other words, needs to respect the wishes and feelings of the person for whom it's being provided. Unthinking sympathy can be very damaging; for instance, telling a depressive to "snap out of it" or "think positively," or informing a friend struggling with fertility that "maybe she's just not meant to be a mother."

In other words, good friends are capable of shaping support in bad times to the needs of their friends, and respect what may offend them.

4. You Don't Just Call Each Other When Things Are Bad

We've all had that one friend. They only get in touch when their lives are a disaster, and they either want to moan or get your help and advice to fix it. You may be able to return the favor when your own life is spiraling down the plughole, but that doesn't mean this is an equitable or nurturing relationship. This kind of neediness, even if it's mutual, is not sufficient to maintain an adult friendship; Psychology Today points out that if you begin to dread their calls or texts, knowing that they'll require your aid, the relationship needs serious rearrangement.

Strong friendships integrate celebration and strength; a friend who's only on call for the hard parts and not the rest of life isn't a friend, she's a therapist.

5. You Both Try To Empathize, Even Your Lives Are Very Different

Sometimes life differences can pull a friendship apart as you fail to have anything at all in common any more, and that's OK! But strong friendships are built on the concept of empathy, so that even if you don't actually experience what your friend is talking about (worries at her high-powered job when you're temping, singledom when you're married), you still do your utmost to put yourself in their shoes.

Empathy is a hugely critical part of successful human relationships; a 2013 study from the University of Virginia showed that the human brain is actually hardwired to be empathetic, and that we react to the likelihood of a friend's pain in the same way that we do to the likelihood of experiencing pain ourselves. If a friend shows no interest in attempting to know what you're going through, or just can't seem to "get" it, things may be beginning to fade.

Passive aggression, or "non-verbal aggression that manifests in negative behavior" (to use the Counseling Directory's excellent definition), is the enemy of healthy communication. A relationship of any kind where people feel unable to show their anger or frustration openly — and instead hide it behind the silent treatment, miserable expressions, the insistence that everything's "fine," and other kinds of indirect hostility — is automatically going to be less than healthy. Passive aggression is much harder to deal with than straight anger, since there can't be any discussion without considerable coaxing and courting of the hostile person to admit what's wrong.

Passive aggression also, according to the Guardian, tends to occur in people who are at the "lower end of a power dynamic," or feel they should be polite and keep calm even though they're furious, both of which are tricky obstacles to true and equal communication. If you're in a friendship where you can take a deep breath and explain why you're angry, instead of lashing out with "I'm fine," then things are good and equal in your friendship.

7. Neither Of You Use Guilt Or History As A Weapon

Good friendship protocol: you do not get to bring up something they did eight years ago and have already discussed/been forgiven for. Nope. Not acceptable. Neither are you allowed to weaponize guilt, by which I mean using guilt trips to manipulate a friend into doing things he or she can't or don't want to do. Both tactics are absent from strong friendships, because the participants recognize that the best way to get things done is to be calm and clear about feelings and needs, not use their intimate personal knowledge of one another to create the outcomes they might want.

Strength in friendships, as you may have guessed, is about communication. It's not necessarily about years together, or strong shared memories, or helping each other out of dire situations; it's centered on empathetic connection, respect, and support. If this makes you want to go hug your best friend for being awesome, go do it.

More like this
This Psychological Effect Might Be Keeping You From Hitting Your Goals
By Lexi Inks
21 Signs You're Not In Love Anymore
By Sara Altschule, Kathleen Ferraro and Carolyn Steber
10 Ways To Be More Empathetic To Your Partner
By Raven Ishak and Lexi Inks
The 19 Best Tweets & Memes About Bisexual Awareness Week
By Lexi Inks
Get Even More From Bustle — Sign Up For The Newsletter