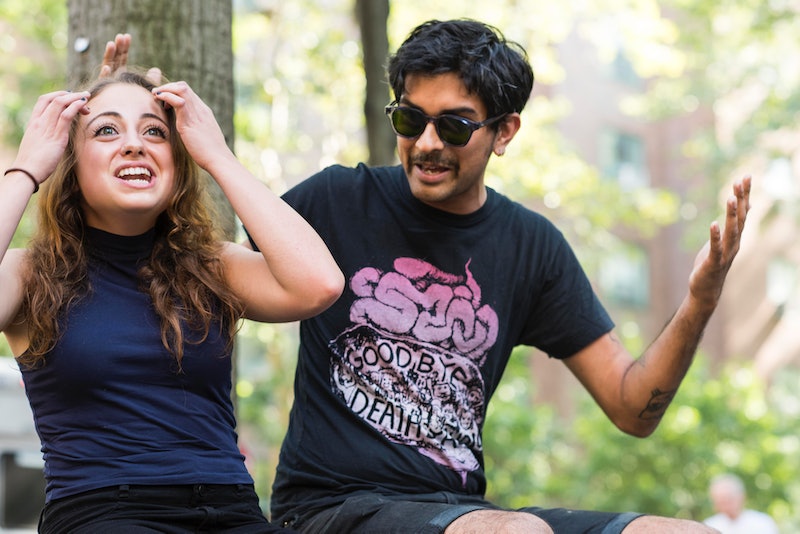 I'd say "Happy Equal Pay Day," but the entire point of the occasion (this year it's April 12) is that it's not a happy day; if you're a woman, it's likely a very angry one. Every year, Equal Pay Day measures how long women would have to work into the new year just to earn the same as men did in the 12 months of the previous one. The fact that this year it's an additional three months should indicate to you that the gender wage gap (the gap in income between women and men) is a real and exceptionally problematic thing. It's been getting better, but it's nowhere near gone. But unfortunately, there are going to be people who say it isn't a problem, and I want you to be ready for them.

These aren't going to be snappy comebacks. They aren't going to get you "awww yeaaah" high-fives at the bar when you slam them in the face of a pay-gap naysayer. The fact is, economics doesn't lend itself well to witty responses. (I wish.) But the truth is there, it's in the numbers, and you've got to be a fool to look at them and see anything other than a massive problem.

Here's the plan: give them your best "oh my god you idiot" stare, forward them this article, and then flounce off reveling in your own badass correctness.

Oh, honey. I really, really wish that were true. It's easy for people who dislike unpleasant truths to disavow facts, but the gender pay gap is there, and it's staring us in the face. The fact that it's an intricate result of gender and family expectations, job choice, legislation, and workplace discrimination doesn't lessen the impact — it just means it needs a bit more unpacking.

Here are some stats for you: According to the White House's Council of Economic Advisers, women in the U.S. make up 47 percent of the workforce and have 49.3 percent of all available jobs. But the US Census Bureau has documented that the wage gap is hovering at 78.6 percent; that is, women working full-time, all-year jobs earned 78.6 percent of their male co-workers' salaries in 2015. The fact that this is a massive boost from 50 years ago and continues to narrow doesn't change the fact that women are, on average, not earning over 20 percent of the salary they deserve. That's mental.

Ah, you say, but that's just on average! Surely many women do earn close to parity! And you'd be right; some women do. The Atlantic reported in March that a new Pew survey estimates young women, aged 25 to 34, are the ones closest to actual age equality; they earn 93 cents to every dollar of their male counterparts. Whether that's because of more vocal feminism in a generation that really doesn't see why it should be paid less than men, better legislation (for instance, the Lilly Ledbetter Fair Pay Act of 2009), sociodemographic changes, or something else, it's pretty awesome. But it's also not the norm. The older a woman is in the workforce, the Pew report says, the more likely it is that their pay gap is large as hell.

And it's not just women who are acknowledging it. The Wall Street Journal released some very interesting studies in February this year about feelings about the wage gap across the gender divide. Careerbuilder surveyed 3,2000 full-time workers and 223 HR managers, and found that 65 percent of women thought that their place of work paid genders unequally, and a full 40 percent of men agreed with them.

2. "It's Not About Discrimination"

OK, so you believe in the pay gap now. But you're still not down with the idea that it's all about people hating women and wanting to short them of money. Surely that's a bit conspiracy-theory, right?

The reasons behind the pay gap are very nuanced and the subject of a lot of debate, but the common agreement among economists and academics is that a significant percentage of the gap is likely due to discrimination and unconscious bias— which absolutely sucks. Even without outright discrimination, ideas about what jobs are "suitable" for women and expectations about childcare and post-child life impact heavily on women's earnings. Gender, in other words, impacts our pay in many ways, some of which are far more structurally embedded than just "eh, we'll pay those ladies less".

If, instead of discrimination, you believe that women just "choose lower-paying jobs" or "have fewer skills" (we'll get to that in a minute), chew on this: the AAUW (American Association Of University Women) conducted a series of studies about what happened to women and men directly out of college. Just one year after graduation, women were paid 82 percent of the salaries of male peers with identical experience and GPAs. Ten years later, that widened to 69 percent. The AAUW controlled for every variable they could think of, from the type of college to college majors and how many hours they worked in their new jobs, and even after that, seven percent of that difference was still unaccounted for. It makes no sense — unless you bring discrimination into play. Outright discrimination, according to a paper by Cornell University, possibly contributes about eight cents of the 21-cent wage gap.

According to the Institute for Women's Policy Research, the 20 jobs dominated by women are low-earning ones, and even in those they earn less than their male counterparts. Those professions, including maid, secretary, nursing, social work, secondary school teaching, and administrative assistance, may be paid less because they're seen as "emotional" and "caring" occupations rather than truly "skilled". Women's work, in other words, is circumscribed by social expectations, and then not properly valued. Four of the most common occupations for women have, on average, a below-poverty line wage for women. It's enough to make you bang your head against a wall.

It's substantially worse for women of color, too. The IWPR's report on gender and race in pay inequality in 2014 revealed that Hispanic women have the lowest median wages, while black women only earn 62.3 percent of the earnings of white men. And in virtually every American industry, men earn substantially more than women of the same race. It's a bleak picture. As the IWPR put it, "the gender earnings gap is magnified by a race and ethnic earnings gap."

A working paper from the European Work and Employment Research Center divides the issue into five explanations: women work in lower-paid jobs, their work is thought to be lower-skilled, they're expected to be more "grateful" or "satisfied" by their work instead of being paid, they're not thought of as main breadwinners, and they're structurally at a disadvantage. By "structurally," the EWERC means that employers might undervalue their work if they're looking for "male" traits like aggression.

4. "It's Not Discrimination, It's Just Women Having Babies"

Having a kid substantially changes a woman's earning potential; if you deny that, you're living on a much nicer planet and I would like to visit sometime. The key difficulty for the gender pay gap on this issue, unfortunately, is that our expectations of childcare and parenting target women disproportionately. They're getting penalized for having kids as women. When it comes to men, parenthood actually boosts their earnings, and that's supremely unfair.

The New York Times reported in 2014 that new research from the University of Massachusetts showed pay goes in one of two ways after you have a kid. If you're the mother, your earnings decrease four percent for every child. If you're the father, they increase by six percent. These two depressing statistics are known as the motherhood penalty and fatherhood bonus. The bonus for dudes seems to come from the perception that a man is seen as more "stable" once he's started a family, more ready for responsibility and able to move up the ladder. He also likely won't take as much time off, if any. (Parental leave isn't guaranteed by the state in the U.S., something the rest of the world looks at with incomprehension.)

Meanwhile, the negative impact of children on women's earnings is huge. Children and the expectation that women will do the bulk of the childcare may cause, according to a study of the motherhood penalty, a loss in job experience and productivity, discrimination in the workplace, and a prioritization of flexibility over higher wages. Even the thought that a woman might, at some point in the future, have a baby may factor into management's hiring and promoting decisions, even though that's illegal. This is subtle discrimination, in terms of society's ideas about roles: men as parents become steady and adult, while women as parents are expected to be the primary caregiver, and lose out because of that. Married women with kids earn, on average, 76 percent of their male counterpart's wages, according to the Massachusetts study; for women in management roles over the age of 40, it's 65 percent.

There are a lot of ways to change this: have much better paternity and maternity care packages, emphasize an equal role for dudes in childcare and domestic chores, find ways in which lost opportunities in child-rearing periods can be make up in other areas. But the key imbalance is a gender-based one, and that's a problem.

5. "It Doesn't Happen In My Industry/Company/Job"

Unless you can give me industrywide statistics on every company, I can assure you that it most likely does happen in your industry.

The Institute For Women's Policy Research has a bundle of data on this. They've got pay stats for 116 industries in full-time work in 2014 (part-time work is a lot harder to study), and across all of them, there was only equality in ONE industry: "health practitioner support technologists and technicians". Yep. One. Hurrah for us.

And high skills don't guarantee equal pay in the slightest. We're all familiar with the tech industry issue, where weekly earnings are a whopping average $300 less for women than men, but other high-paying jobs aren't great either; the Atlantic reports that the highest-earning sectors, like finance and management, are often "hostile environments" for women. That makes it harder for high-flying ladies to redress the balance from the top down.

Doctors and lawyers aren't safe, either. Harvard economists found in 2007 that female lawyers' average income was $90,000 and men's was $122,000, while female physicians averaged around $122,000 compared to men's $187,000. The reasons are often cited as "taking time off to take care of kids" or "choosing more flexible work schedules," and we've already seen how gender's a part of that. Fact is, if you're working full-time, your industry's likely got a problem. And the fact that part-time work is overwhelmingly dominated by women (42 percent of employed women in Scotland, for example, versus 13 percent of men), partially due to factors like childcare and gender expectations, does not help.

Well, no, if you think a loss of $482 billion to the U.S. economy isn't a problem for everyone. That's what equal pay for women would add to the economic ledger, according to the data cruncher Status Of Women In The States. But hey, who wants to be paid equally for the stuff they do and boost the economy hugely by doing so? What's the point in that?

The amount of poverty among working women in the U.S. would be reduced by 50.9 percent if equal pay were universal — and that's just the States. Equal pay's a big deal; a famous 2008 study found that, worldwide, equal pay would be particularly good for lower-income and poverty-line families, and "implies benefits not only for women but also for men, children and the elderly, and for the poor as well as the rich.” It's also good for companies; Credit Suisse confirmed that having women on boards (hopefully with equal pay) improves company performance and share price. In other words, this is good for everybody, and everybody's let down by the fact that it's not happening.