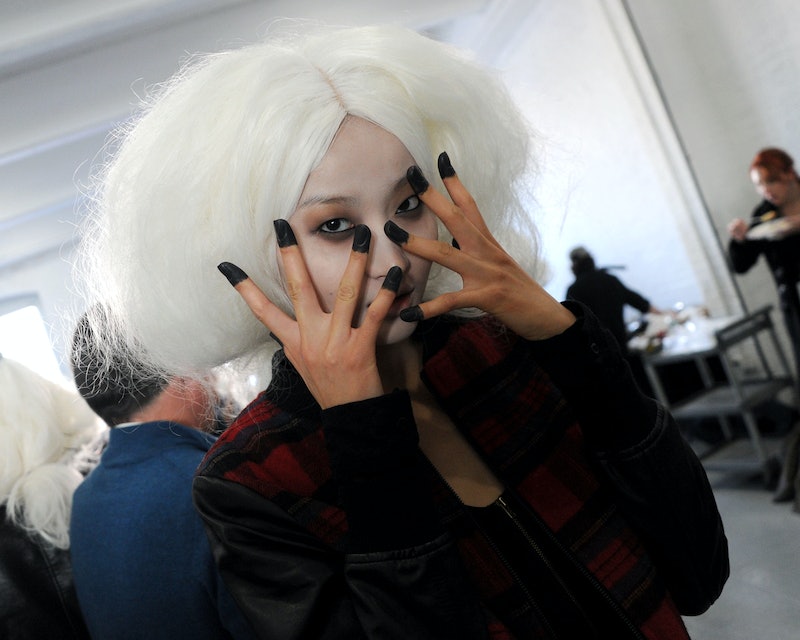 For Spring 2014, Thom Browne gave us an insane asylum; for Fall 2014, he gives us a church. During Monday's show, incense burned, tapers were lit, crosses hung on the walls, and models wore white lace veils that were lifted away from their faces by "priests" before they walked down the runway.

But there was something off about Browne's church — let's just say we'd rather not be caught in it, alone, after hours. The clothes came in shades of gray and black, except for a series of gold looks at the end, and featured plenty of Browne's theatrical detailing. There were oversized puffed sleeves, rosaries around the waist, nun-like coats, and exaggerated mermaid skirts. But if you dared to get a little closer to this unholy sacrament of fashion, you saw the most provocative part: the otherworldly hair and makeup.

Models wore clouds of white hair that bloomed fantastically away from their faces, but the hair had an undead quality — this was she's-been-in-the-crypt-for-twenty-years-and-her-hair-kept-growing hair. The eyes were lined completely and shaded with brown until they looked sunken; the faces were sculpted, skull-like.

The eyebrows were some of the strangest we've seen during fashion week. Brows were left natural, but above them, a thin, drawn-on, Greta Garbo brow was added. The result was doll-like, but in an even creepier way than normal — the fact that the natural brow was still visible made us feel like these dolls had, well, been human pretty recently.

And the fingers! Fingertips were stained sooty black — like Lorde's "manicure" at the Grammy's, which may have been an homage to Michèle Lamy, Rick Owens' wife — then topped off with decadent jewelry. The dark fingers provided a sharp contrast to the white hair, as though each model had died reaching for some holy fire.

If you're absolutely dying to look as ghostlike as these church-going beauties, you'll need a white wig or a trip to the salon for some major bleaching and toning — no amount of dry shampoo in the world will get you that pure, ghostly white. For the nails, XOVain has an easy DIY technique that uses MAC Paint Pots for a color that won't immediately rub off on the priest. And for mimicking those haunted eyes? Well, here's a closeup:

More like this
Introducing Beauty Beat, The UK’s First Luxury Beauty Event For Women Of Colour
By Justine Knight
7 Comfortable Headbands, According To Amazon Reviewers
By Scarlett James
Here Are All 703 Outfits Rachel Wore On Friends
By Kat George
The Best Heels For Bunions, According To A Podiatrist
By Margeaux Baulch Klein and Maria Cassano
Get Even More From Bustle — Sign Up For The Newsletter