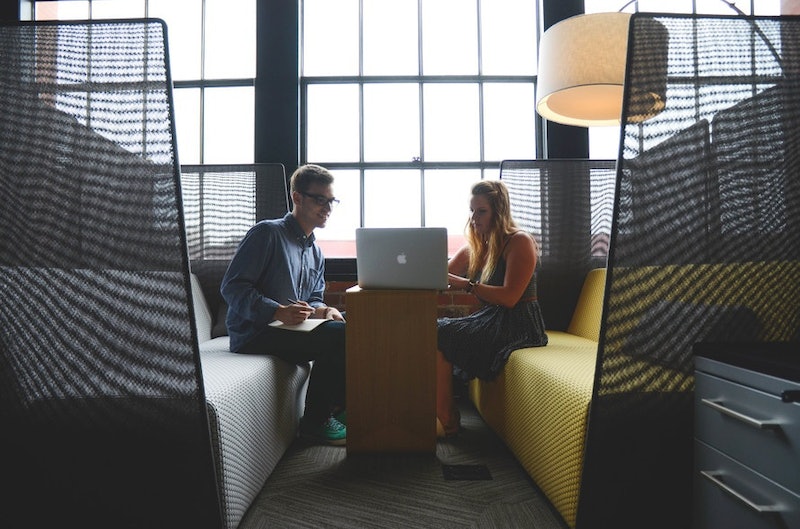 You've been dying to get an interview at a top company in your area, and you finally landed one. You couldn’t be happier, but now the wave of nerves has taken over. To help you out, I’ve rounded up some simple ways to nail a job interview that will make you feel a lot more confident about heading in there. By mentally preparing yourself for anything that might be thrown at you, you’ll increase the chances of walking out feeling like you completely and totally nailed the job interview, and perhaps even landed the job itself.

The key to doing well in an interview, at least in my experience, has been making sure you are very well prepared. This means educating yourself on all of the important aspects of the company, the job description, and going through some common interview questions to make sure you know how to answer them should they come your way. Nothing could give you that deer in headlights feeling quite like getting a question that you’re completely unprepared to answer. Unless you are one of the lucky people who are excellent at thinking up answers on the fly, likely you’ll end up saying something completely random that maybe makes no sense at all. If you want to leave the interview void of the feeling that you’ve messed up in any way, let’s help you prepare in a few simple steps. This is your big shot — now, let’s take it and run with it. Here are six simple ways to nail that job interview.

Of course you’ve read through the job description in preparation of the interview, but have you looked deeper into the company? You should. According to the Huffington Post, one of the main things you need to do if you want to nail your interview is to do as much homework as you can on the company you’re interviewing with, including the people who run it, notable events they’ve had, nonprofits they support, and the like. Pick out some of the most interesting points from your background research and have them handy for the interview. It’s not as if the interviewer is going to ask you something specific about an event they held two years ago, but think of how impressed they will be if you just so happen to know an interesting fact about that event. The Huffington Post noted that this will show the employer that you’re already invested in their company, before you’ve even stepped foot onto the job.

2. Use Body Language To Your Advantage

Ah, body language. It can say so much without really saying anything at all. A trick to getting people to like you is to mimic their movements and actions, as mirroring the interviewer will show you’re on the same page as they are, according to Business Insider. Don’t go overboard but obviously reenacting everything the interviewer does, and rather keep it to the more subtle gestures (e.g., if they scratch their head, wait a few moments and scratch yours too).

I clearly recall sitting in an interview once that I’d prepared extensively for, nailing one question after another. Then, as the interview was almost over, my potential supervisor said, “So, I have one more question I usually like to ask: If you could have dinner with one person, living or dead, who would it be and why?” I’d heard countless times that this is something interviewers might ask, but for whatever reason I had zero response prepared. I stared blankly until finally blurting out, "I think I’d say Marilyn Monroe because she made such a big impact on the entertainment industry.” First of all, I’m not even a Marilyn Monroe fan. I mean, she’s fine, but I’ve never been one of those girls who puts up her quotes all over their walls. I genuinely have no idea why I said that — maybe it’s because she’s the first name that popped into my head. To make matters worse, this job had nothing to do with the entertainment industry. Needless to say, I didn’t get that job.

According to INC., a lot of times the “trick questions” are the most common ones. This would include a question like the one I received, or others like “What is your biggest weakness?” To be safe, prepare yourself for any typical interview questions you think might come your way, even if the likelihood they’ll ask seems minimal (you don’t want to be in a Marilyn Monroe situation, right?). According to Forbes, here are 50 of the most common interview questions to get you started in your preparation.

4. Dress Nicely, No Matter What

Sure, maybe you’re interviewing at a laidback start up where you know they’re allowed to wear Snuggies at their desk. This still does not give you the liberty to dress very casually during the interview. According to Monster.com, while many offices today have casual dress codes, this does not give you permission to dress as the employees do when you’re going in for the interview. Keep it as professional as possible, and then once you’re hired feel free to take advantage of being able to wear jeans to the office.

5. Don't Make The Interviewer Want To Tune You Out

Are you ever listening to someone speak about a topic you’re only semi-familiar with, and they seem to go on and on and on? You find yourself staring at this person thinking, “Are they ever going to stop talking?” All you can think of is putting on your headphones and completely tuning them out. If you’re drowning the interviewer in words — especially if they words are relevant to the job at end — stop right there because you could be doing more damage than good. Remember that the person (or people) interviewing you are taking time out of their busy day to sit down and listen to why you are a good fit for this open position. They have a million things piling up on their desks, but they’re spending time talking to you. Now, make that time worth it.

According to Fast Company, start by talking about your most recent employment and how it makes you qualified for the open position at hand. Use your limited number of words to sell the interviewer on why you’re a good match — don’t waste time talking about things like your personal history which is likely irrelevant in this scenario. If you feel like you’re rambling, reign it in.

Forbes suggested an interviewing tip that we should all be following in every circumstance, no matter what — be nice. Smile and be polite to everyone, from the people at the front desk to the interviewer themselves. The outlet said the goal is to get everyone you’re interacted with that day to remember you in a positive way. So slap on that smile and bring your manners along with you, too.

If you’re heading into a job interview soon, make sure to brush up on the above tips. Then, head into there confidently (and promptly), and nail that interview.