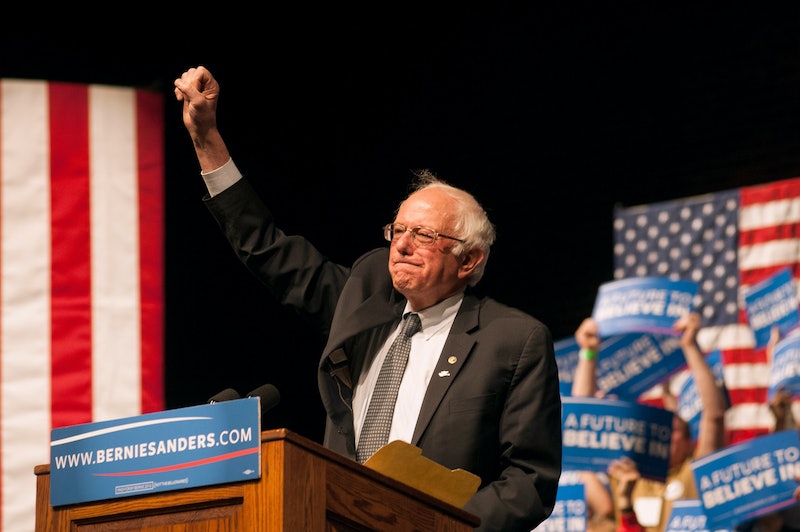 Bernie Sanders missed a big opportunity in his Wisconsin victory speech Tuesday night to run damage control on a recent and revealing interview with the New York Daily News. Instead of making any substantive claims that could have helped redress the lack of knowledge he displayed when the full New York Daily News interview transcript was released on Monday, Sanders launched into his usual speech — pundits thought we couldn't do it, media thought we couldn't do it, started from the bottom now we here. Like all Sanders speeches, this was more of a word cloud than anything else — billionaire class, Wall Street, income inequality, $27, voter turnout, the one percent, college debt, the status quo, establishment, revolution. If you didn't watch the speech and it sounds like I'm being reductive, consider how it felt to actually, you know, watch the speech.

I don't mean to single Sanders out without context — every candidate does this to some degree in their victory speeches and even in their concession speeches. But of all the candidates, of either party, the only other one who hits the word-mallet this hard over your head is Donald Trump.

I like Sanders, and when I read the New York Daily News transcript, I was hoping it wouldn't be that bad. But it is.

Daily News: Okay. You would then leave it to JPMorgan Chase or the others to figure out how to break it, themselves up. I'm not quite...

Daily News: Okay. You saw, I guess, what happened with Metropolitan Life. There was an attempt to bring them under the financial regulatory scheme, and the court said no. And what does that presage for your program?

Sanders: It's something I have not studied, honestly, the legal implications of that.

Oof. There's much, much more of this throughout the transcript. Sanders said in it, "I believe..." a lot in response to policy questions he should be answering with "I know." He admitted numerous times to being under-briefed and underprepared, and he said he could answer the question if he had his notes. When asked a question regarding the Israeli-Palestinian conflict, Sanders dodged an actual answer by responding, "You're asking me now to make not only decisions for the Israeli government but for the Israeli military, and I don't quite think I'm qualified to make decision." Pro-tip to Sanders: Saying "I don't think I'm qualified" in response to a foreign policy query is never good to include if you're running for president.

It also came into especially clear focus during the interview just how much Sanders sounds like Trump on even the occasional economic policy. Tell me this doesn't remind you of anyone:

Daily News: So how would you stop that?

Sanders: I will stop it by renegotiating all of the trade agreements that we have. And by establishing principles that says that what fair trade is about is you are going to take into consideration the wages being paid to workers in other countries. And the environmental standards that exist.

Sanders: Yeah. Look, these trade agreements, let's be frank. Now, people may disagree with me, all right. My understanding, talking to many economists is, NAFTA, PNTR with China, other trade agreements have cost this country millions of jobs.

Even the Daily News couldn't help commenting on the similarities.

Of course, the above excerpt notwithstanding, Sanders and Trump are worlds apart on most policies — to say nothing of morality and human decency and all that stuff. I cannot stress this difference enough.

However, their speaking styles are awfully similar sometimes. They each have a brand and a party line, and their lack of knowledge in numerous areas of policy never seems to matter to them because they always circle back to the same one or two talking points. It doesn't surprise us when Trump is perpetually revealed to have no idea what's going on. But while Sanders' foreign policy has gotten better, Wall Street is the one thing we really expected him to know. He let it slip to the Daily News that he is unprepared, but his Tuesday night victory speech offered him an immediate opportunity to address the setback. Yet, he chose not to take it.

Maybe I'm not being realistic — candidates just don't use their victory speeches this way. But I mean — why not? It was the perfect opportunity for damage control. The timing was right, and Sanders had the home-field advantage, so to speak, of addressing a friendly crowd. Who would not have preferred to hear him address the interview and demonstrate that he actually knew what he was talking about, rather than say the same things that anyone who has seen him speak just a couple of time can recite by heart?

This was a half-hour speech, immediately following a day when Sanders revealed he doesn't know as much about the inner workings of big banks as he'd like us to believe, when he is being compared to Trump. Instead of tackling these concerns, Sanders gave a speech that actually reminded me a whole lot of Trump, stylistically anyway.

"Democracy is not a complicated process," Sanders told the joyous crowd.

Eh. Democracy is kind of a complicated process. Statements like that are what keep Trump where he is. Trump oversimplifies complicated things, and he makes his supporters believe that he can, therefor, fix them — we will bomb ISIS, thus, no more terrorism, doy. Sanders is imminently more qualified to be president than Trump is, but he could have used this Tuesday victory speech to go beyond his expected song-and-dance, and he simply did not.