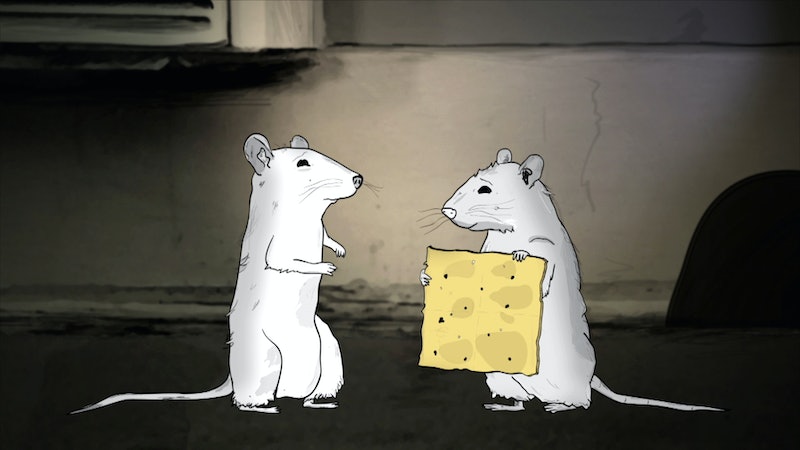 Some of HBO's television has transcended its presence on premium cable to become cultural phenomena. Game of Thrones, Girls, and True Detective have all become major tentpole series for the network. While the animated comedy Animals isn't quite there, it's not trying to be either. The show, executive produced by brother-auteurs Jay and Mark Duplass, will finish its first season of semi-improvised animal shenanigans on Friday, capping off a season with a longer guest list of comedians than almost any other show on television. With the debut season about to end, fans need to know when Animals will return for Season 2.

While the Duplass brothers' other HBO show, Togetherness, was cancelled after its second season just a few weeks ago, Animals was never in any real danger. The animated series was picked up for two seasons after being optioned at the Sundance Film Festival, as reported by Deadline. So Animals is definitely returning, but there's no word on when Season 2 will premiere. A safe bet would be to assume that Animals will be premiering in early 2017 — likely late January or early February — about a year after the premiere of the first season, as is common for most HBO series. Though no return date has been set, fans of the Duplass brothers' unique brand of comedy should plan on having some time to kill before the next season. Here are some shows you can watch to get your Duplass fix in the meantime.

Although the series was short-lived, Togetherness is the epitome of a Duplass production. It's an honest, often quiet look at modern living — in this case, the themes of marriage and friendships in the latter half of your 30s — that features sharp, witty, and often uncomfortable comedic moments. Togetherness' two seasons feature an array of strong performances from indie film actress Melanie Lynskey, Amanda Peet, and Mark Duplass himself. Togetherness is streaming in its entirety on HBO GO.

While Transparent isn't a Duplass brothers production, it features many hallmarks of their typical projects, including a quiet approach to everyday lives, a loose feel to the dialogue, and a Duplass brother in the main cast. The story follows the Pffeferman family and how their lives change after their parent comes out as transgender, and Jay Duplass plays the middle son in the family, Josh Pffeferman, who often brings a slick sense of humor to an otherwise subdued show.

The League, like Transparent, isn't produced by the Duplass brothers, though it feels like a more chaotic version of some of their other projects. The FX series centers around six members of a fantasy football league and their ongoing quest to defeat each other. Mark Duplass stars as Pete, and his real wife Katie Aselton stars as Jenny, but the family connection isn't the only thing that makes The League similar to other Duplass projects. It is a semi-improvised show, which is similar to the Duplass brothers' improvisational filmmaking approach that they often use in their projects, outlining a loose script and then allowing the actors to improvise the dialogue.

Mark and Jay Duplass have been influencing filmmaking since their first big release, The Puffy Chair, began touring indie film festivals. Now, their recognizable brand of filmmaking has expanded beyond indie films and is going on to influence popular television shows and major motion pictures. The Duplass brothers always seem to have a lot of projects on their hands, but what makes their approach unique is that they are always far from conventional. No matter if it's Animals Season 2 or their upcoming adaptation of indie film A Teacher, expect to be surprised by whatever they think up next.