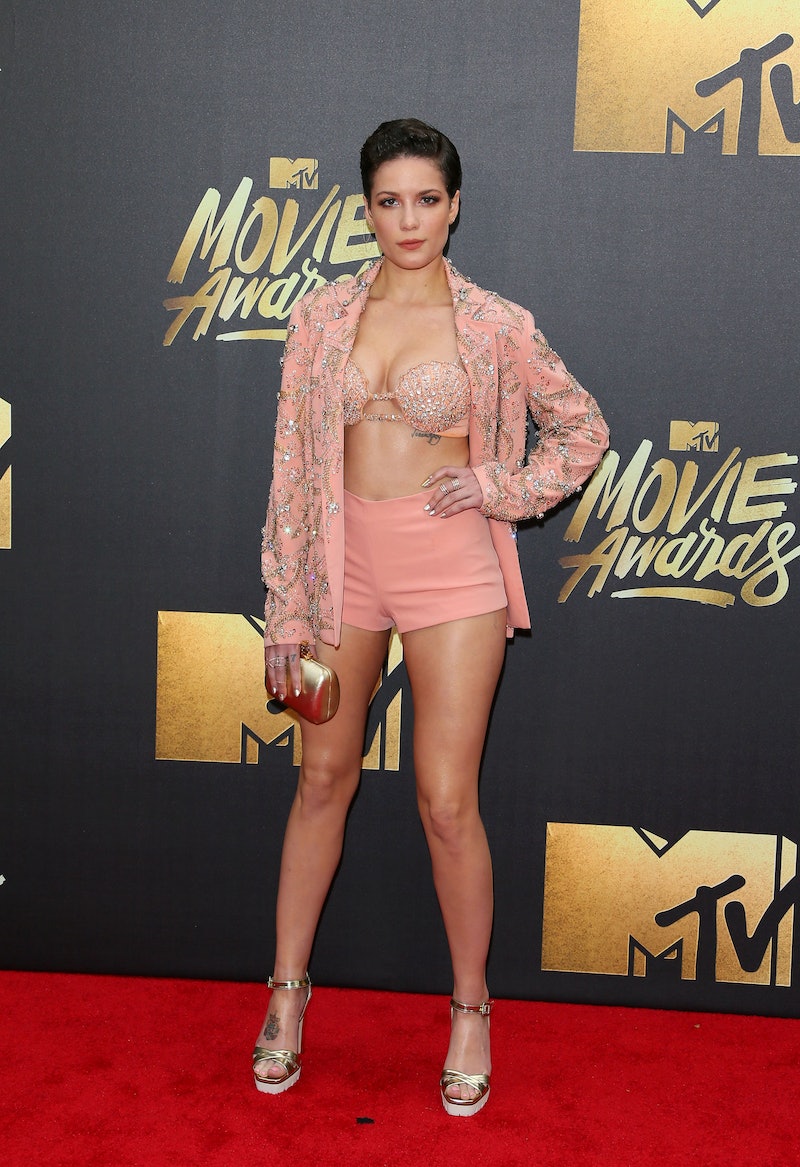 The MTV Movie Awards will air on Sunday, April 10 at 8 p.m. after being taped on Saturday, and Halsey fans are getting excited to see her musical performance from the awards show. The singer and Ariana Grande both performed at the 2016 MTV Movie Awards, and since the former isn't quite as well known as Grande, Sunday's broadcast should introduce her to a wider audience. Those newer fans may want to know more about her and have some questions, like what is Halsey's real name?

According to Vice, Halsey was born Ashley Nicolette Frangipane, and you may notice that Halsey is an anagram for Ashley. However, in an interview with Vevo dscvr, the singer explained that a childhood friend of hers lived on Halsey Street (in Brooklyn), which is where she developed her art as a teen. So despite the Ashley connection, the name comes from the street where she spent weekends away from her New Jersey home.

And the woman also known as Ashley Nicolette Frangipane is certainly not the first star to change her name. Halsey is actually in good company, as many current pop stars use stage names — maybe even more than you would expect. Here are 16 more artists who go by different names.

Mars told GQ that he changed his name from Peter Hernandez to avoid being stereotyped in the music industry.

Born Destiny Hope Cyrus, Miley legally changed her name to her stage name in 2008, as reported by People.

According to Billboard, Elizabeth Woolridge Grant went by Lizzy Grant and May Jailer before landing on Lana Del Rey.

Onika Tanya Maraj told The Guardian she doesn't like it when old friends and family call her by her stage name, Nicki Minaj.

You may remember that the rapper used his full name, Aubrey Drake Graham, when he was acting on Degrassi.

John Legend was born John Roger Stephens, which is the name the Oscars used when he took home Best Original Song in 2015 for "Glory."

Ella Yelich-O'Connor told Interview that she chose the stage name Lorde because, "ever since I was a little kid, I have been really into royals and aristocracy."

With a real name as awesome as Amethyst Amelia Kelly, I'm surprised that Iggy Azalea changed it.

Alicia Keys was born Alicia Augello Cook, so only her last name changed for the stage.

You probably figured that her real name isn't Pink, but it's still strange to think about the singer as Alecia Moore.

Ben Haggerty is the surprisingly common, real name of Macklemore.

Technically, Adele is really named Adele, but there is more to it than that. Her full birth name is Adele Laurie Blue Adkins.

Halsey already belongs to a pretty impressive group of singers who use stage names, and now she's joined the even more exciting club of MTV Movie Awards performers.