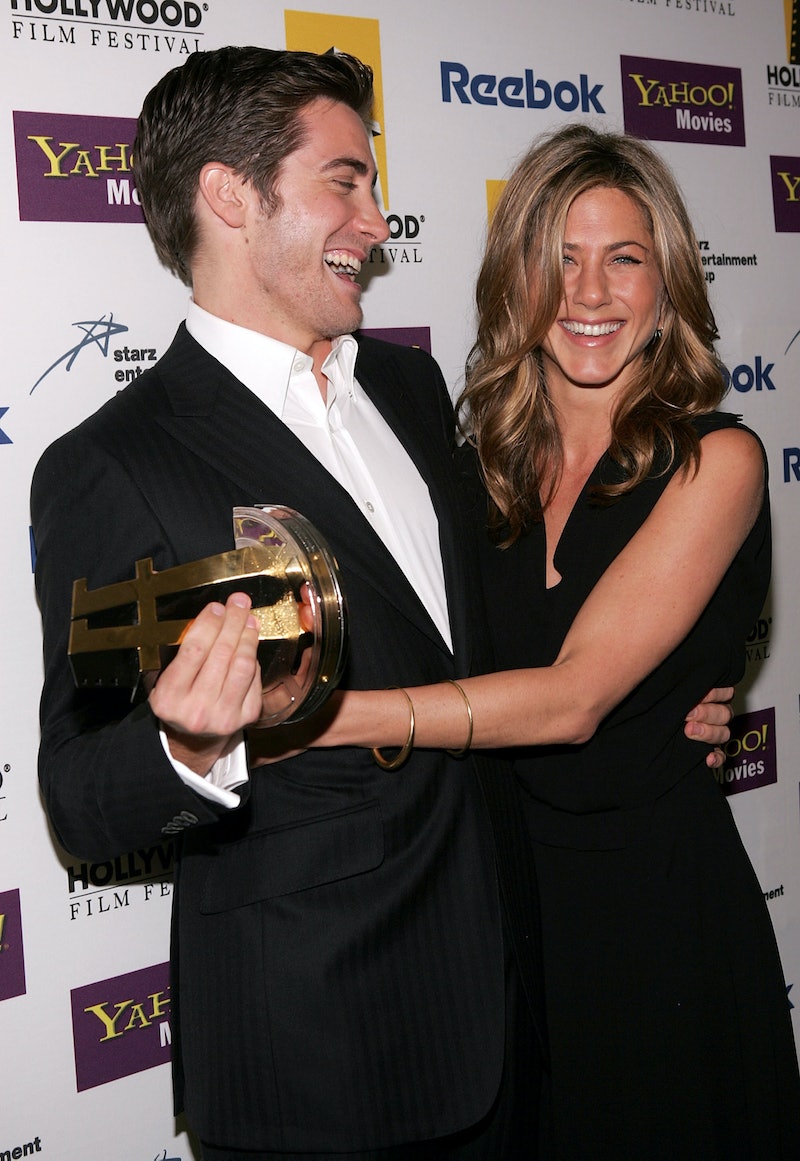 In an interview with People, Jake Gyllenhaal revealed that he had a crush on Jennifer Aniston years ago when they starred in 2002's The Good Girl together. At the time, Aniston was married to Brad Pitt, and Gyllenhaal began a long-term relationship with Kirsten Dunst immediately after the movie's release, so this pairing never happened. It's not super surprising that Gyllenhaal cops to crushing on Aniston (hello, most of the universe has since her Friends days), but it definitely made me wonder how things might be different if the two A-list actors had hooked up back in the early aughts.

Gyllenhaal got a bit flustered when asked about working with Aniston on The Good Girl, and it's ridiculously cute. He tried to play it cool. "She's a rough one, you know, not likable. So hard to compliment," he joked. "I will say, I had a crush on her for years. And working with her was not easy... I was — um, yeah. That's all I'm going to say. It was lovely. It wasn't hard, that's what I would say."

Of course, in 2002, Friends was still wildly popular, so it makes sense why Gyllenhaal would crush on Rachel Green. But he admits that's not actually where his admiration stemmed from.

Gyllenhaal said it was "not so much Friends, but like kind of just her personality from afar and movies that she was in — some of Friends, but [I'm] not like a huge Friends fan, yeah... but just like who she is." Ugh, is it possible to ship a couple that never actually happened? Because I love these two.

We all know that Gyllenston never happened, but it's still fun to imagine how things might have been different if they had hooked up IRL. First of all, the Brangelina love triangle would have been a totally different story. Pitt famously started dating Angelina Jolie after his marriage to Aniston ended, but if Gyllenhaal and Aniston had hooked up at the time, there wouldn't be years of "poor Jen" stories in the media. In fact, Aniston would likely have been painted as the villain if her marriage ended due to a romance with Gyllenhaal. Crazy, right?

Also, Gyllenhaal may never have been in a relationship with Dunst, whom he began dating right after The Good Girl's release in 2002 until they broke up in July of 2004.

Furthermore, Aniston definitely would have had a rep as a cougar if she'd dated Gyllenhaal. During the movie's release, he was 21, and she was 33, which isn't a huge age gap by most standards, but definitely one the tabloids would have latched onto. I can picture the Us Weekly covers now, declaring that "cougar" Jen ended her marriage for a hot younger man.

It's also likely to assume that if Gyllenston had not worked out, he would not have gone on to date Reese Witherspoon, whom he dated from 2007 to 2009. Witherspoon and Aniston are, by all accounts, very good friends, so I doubt Witherspoon would date her friend's ex.

Their career trajectories may have taken a different turn, as well. Aniston is known for her roles in romantic comedies, while Gyllenhaal is known for more serious fare. Perhaps Gyllenhaal may have taken cues from his lady and starred in more rom-coms? Or Aniston may have taken on more edgy, serious roles? Gyllenhaal has been nominated for an Academy Award for his work in 2005's Brokeback Mountain, but Aniston has not. She has, however, won an Emmy and a Golden Globe for her work on Friends. Perhaps her sitcom success would have led Gyllenhaal to test the TV waters.

Either way, these two have both had enviable careers and seem to be incredibly happy with the way life has taken them, so it's not a bad thing that they never hooked up. It's still pretty cute to see Gyllenhaal shower Aniston with praise, though. The mutual admiration has clearly been there from the get-go, as evidenced by this 2002 interview the co-stars did with The Insider.

Gyllenston, the world hardly knew ye, and yet, we still ship you.