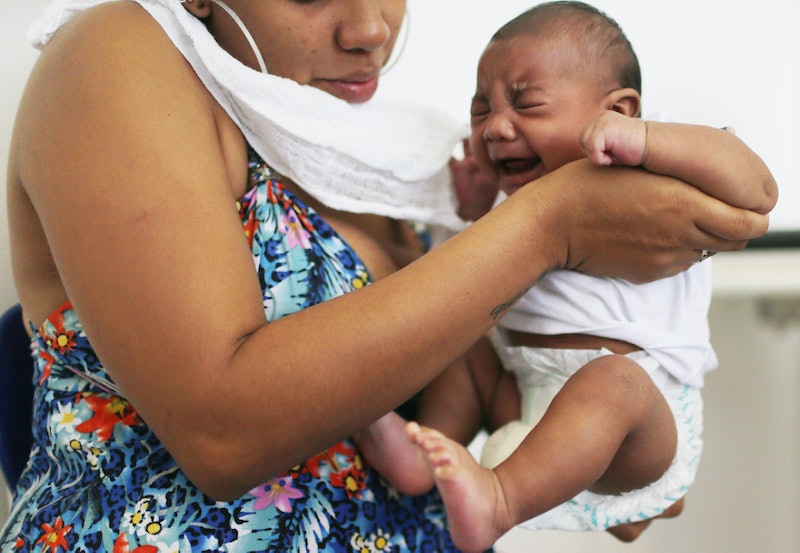 If you were raised bilingual, there's already plenty of evidence that you're probably smarter than the rest of us. In case you wanted even more bragging rights, though, a new study shows that bilingual babies have higher functioning brains than monolingual ones. I just hope that you all use this extra brainpower for good and not evil.

In the study, researchers used a special brain imaging helmet to monitor brain activity for a group of 11-month-old infants. Half the babies were eraised in monolingual households, with parents who only spoke to them in English. The other half were raised in bilingual households where their parents spoke both English and Spanish.

While the babies were hooked up to the helmet, researchers played a series of sounds, some of which mimicked English sounds, while others mimicked Spanish sounds. They found that even though the children weren't even a year old yet, there was already a noticeable difference between the babies raised in bilingual and monolingual households.

Unsurprisingly, bilingual babies were able to process both English and Spanish sounds, while monolingual babies processed only English. But more importantly, researchers found bilingual babies showed more activity in their prefrontal and orbitofrontal cortexes, areas of the brain that are involved with things like decision-making, personality, and other high-level cognitive processes. Which strongly suggests that the bilingual babies are smarter.

Plus, the process is so cute. Look at this:

"Our results underscore the notion that not only are very young children capable of learning multiple languages, but that early childhood is the optimum time for them to begin," the study's lead author, University of Washington research scientist Naja Ferjan Ramirez, said in a statement.

"Our results suggest that before they even start talking, babies raised in bilingual households are getting practice at tasks related to executive function," she continued. "This suggests that bilingualism shapes not only language development, but also cognitive development more generally."

In other words, raising your kids bilingual makes them smarter. So if you were raised bilingual congratulations!

Check out more about the study here: