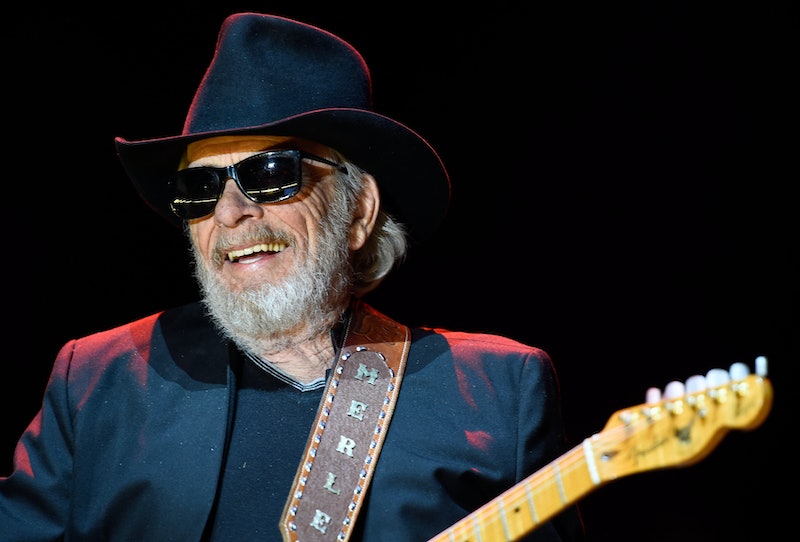 On Wednesday, country music legend Merle Haggard died at his home in California of complications from pneumonia. It was his 79th birthday, as well as the culmination of a storied career that spanned more than 50 years. The musician was known for his successful songwriting and his influence on other artists. But some of Haggard's most relevant quotes today didn't come from songs at all. Rather, they came from his views on politics.

Like a certain candidate who is currently campaigning for the Republican nomination, Haggard was not known for his political correctness. He had a criminal record from an early age, and he sang about marijuana, but that was no obstacle to success and respect within the music industry. Not to mention how Haggard was often considered an outsider from the mainstream music circles in Nashville. (If "outsider" isn't a term that relates to the current election, then I don't know what is.) In another connection to the current state of the GOP, albeit a strained one, Haggard was pardoned by California Gov. Ronald Reagan, who is widely considered a gold standard for modern-day Republicans.

Haggard didn't often give interviews of any sort, much less about politics. When he did, he raised some eyebrows. But he probably couldn't have raised any more eyebrows than the certain candidate I mentioned earlier has done this time around.

What I hate is a statesman speaking out of both sides of his mouth.

This one is actually a lyric from an album Haggard released in 2011. Many politicians are accused of flip-flopping on important issues. That's certainly not specific to the time of Haggard's song or to the current election. Right now, though, it has a particular relevance for Trump, who has been accused of switching up his stances on issues like abortion and foreign policy.

It's just a big old political game that I don't want to be a part of.

In a 2010 interview about President Obama, Haggard discussed the misinterpretations that he felt had been spread about POTUS. "It's really almost criminal what they do with our president," he said. "They call him all kinds of names all day long, saying he's doing certain things that he's not." Haggard met the Obamas on a trip to the White House to receive a Lifetime Achievement Award.

I don't think it much matters who the president is.

Certainly, the current candidates would disagree with this quote, regardless of their party affiliation. Yet in 2012, as President Obama campaigned for reelection, Haggard seemed to argue that one man can't really impact the country but so much. Then again, Haggard hadn't yet seen Trump as a candidate.

I back the man for the things the man believes in, not whether it says "R" or "D" down there beside his name.

In 2005, Haggard told Billboard that the most important lesson he learned from the music industry was to keep his opinions to himself, which he clearly found particularly relevant to politics. Although it's been more than 10 years since Haggard shared this lesson, it remains relevant to politics today. After all, the current election has caused voters to wrestle with tough questions about candidates' labels, such as, "Is Trump a true conservative?" and, "What does Bernie Sanders mean when he uses the 'Democratic socialist' title?"

Haggard may not have lived to see the ongoing election pan out, but something tells me he would've rather stayed out of it anyway. His line of work may have been music, but his insight into American culture proved deep. With his background, any controversy he stirred when he did decide to talk about politics probably didn't bother him much.

More like this
What Is Ben Affleck's Net Worth? At 50, The Oscar Winner Makes 8 Figures Per Film
By Meg Walters
Why Eurovision 2023's Host City Won’t Be Revealed For A While Yet
By Sam Ramsden and Rachel Mantock
An Ultimate Guide To The Music Of 'Rap Sh!t'
By Brad Witter
What Is Megan Thee Stallion’s Net Worth? The Traumazine Hitmaker Isn’t Worried About A Budget
By Hugh McIntyre
Get Even More From Bustle — Sign Up For The Newsletter