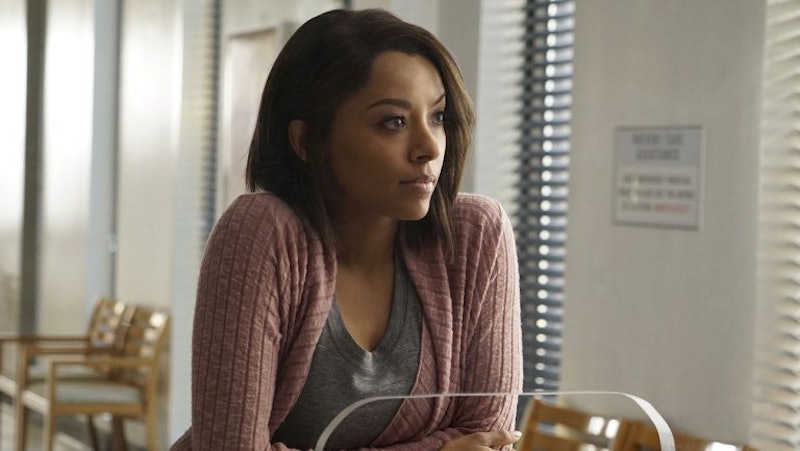 Brace yourselves, Vampire Diaries lovers, because I have some difficult news to share. According to a new interview with US Weekly, Kat Graham is leaving The Vampire Diaries after Season 8 for good. And if this news makes you want to throw your hands in the air and wail like a madwoman, I don’t blame you. I basically did the same earlier when I heard the news, because Graham has been a part of this show since the pilot episode. What will Mystic Falls be like without her?

A much sadder place, that’s for sure. Graham spoke with US Weekly in detail about her decision at the iHeartRadio Music Awards on Sunday, and revealed that while the decision hasn’t been an easy one, but it’s one that is definitely set in stone. She told the magazine exclusively that, "Season 8 will be my last season. I just hope that whatever I do after, the crew can come with me. If the crew can come with me, then we'll be good. The crew is going to be the hardest thing to let go, because we are a family."

That doesn’t sound like the former Hannah Montana star is wavering in the least about her decision. I’m guessing whatever happens to her bewitching character Bonnie Bennett has already been decided.

But! That doesn’t mean there isn’t anything else to look forward to. In the same interview, Graham revealed that Bonnie still has some big moments ahead of her before she makes her Vampire Diaries departure. "There’s some really intense stuff with my character this season. I think the biggest episodes I’ve ever had are 20 and 21. It's pretty major for the character — huge turns, a lot of stunts and cool sh*t!"

The episodes that Graham is talking about will air on April 29 and May 6 respectively. In other words, we still have plenty to look forward to from Bonnie throughout the rest of Season 7 and all of Season 8.

Besides, that’s an entire year away. I’m sure we’ll get plenty of Graham before she leaves the show for good.