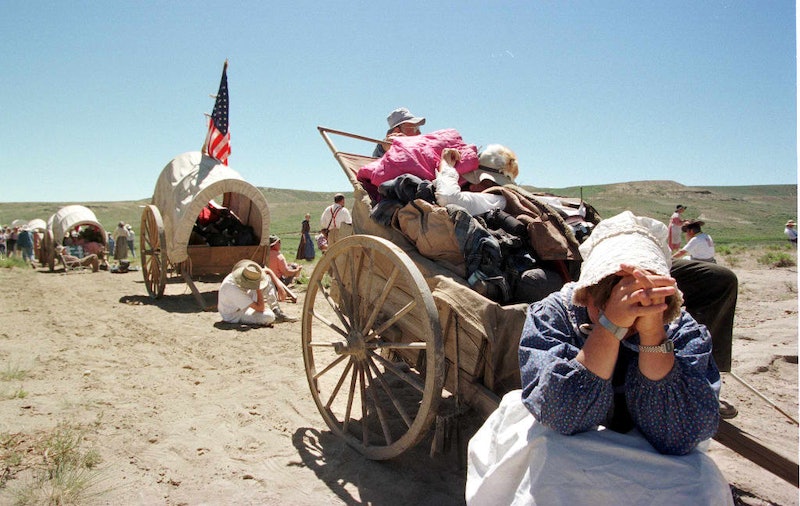 If I asked you which state's nickname had to do with equality, would you have guessed Wyoming? The state earned its moniker for being largely ahead of its time for granting women voting rights during the Westward Expansion of the mid-1800s. But should Wyoming still be called The Equality State?

More than 20 years before Congress would admit Wyoming into the Union as the 44th state, the temporary government for the "territory of Wyoming," as it was known back then, gave women the right to vote in 1869, the first state in the country to do so. Its historic decision represented one of the women's suffrage movement's most significant and earliest victories.

The bill was introduced by William Bright, a saloonkeeper who was elected president of the territory's legislative council. However, Bright's proposal wasn't completely revolutionary at the time. Although Wyoming was the first state to pass a bill on women's suffrage, it wasn't the first to take up the issue. Legislatures in the Washington Territory, the Nebraska Territory, the Dakota Territory, and even Congress had attempted, unsuccessfully, to pass legislation granting women the right to vote since 1854. Moreover, Bright was likely motivated more by a desire to draw women to Wyoming and shore up a voter support base for Democrats in the state than by an ardent belief in the women's suffrage movement. Men reportedly outnumbered women six to one in Wyoming at the time.

On top of granting women the right to work, Wyoming's legislature also passed a bill guaranteeing male and female teachers would be paid equal salaries and a bill that guaranteed married women property rights separate from their husband during its 1869 session.

Wyoming boasts other female firsts, which led the state's early legislatures to think it was a leader of equality. The state appointed the first-ever female justice of the peace in 1870, when Ester Hobart Morris of South Pass City was named to the position. In 1924, Wyoming elected Nellie Tayloe Ross to become the first female governor to take office and later the first woman to be appointed director of the U.S. Mint.

Nowadays, however, Wyoming's Equality State moniker serves more as an aspirational message rather than an accurate description of the state. In 2016 and 2015, women made up only 13.3 percent of Wyoming's state legislature, a drop from the 15.6 percent and 16.7 percent of seats they occupied in 2014 and 2013, respectively. In 2012, a report by the Wyoming Women's Foundation revealed the state had the highest wage gap in the nation, with women earning just 65 cents for every dollar men earned, the Laramie Boomerang reported. Comparatively, the national figure was 73 cents that same year. The report also revealed Wyoming had the lowest rate of female-owned businesses. Moreover, the state is overwhelmingly white, according to recent data from the U.S. Census Bureau.

Women may have gained an early boost in Wyoming, but the state continues to come up short of its Equality State nickname.