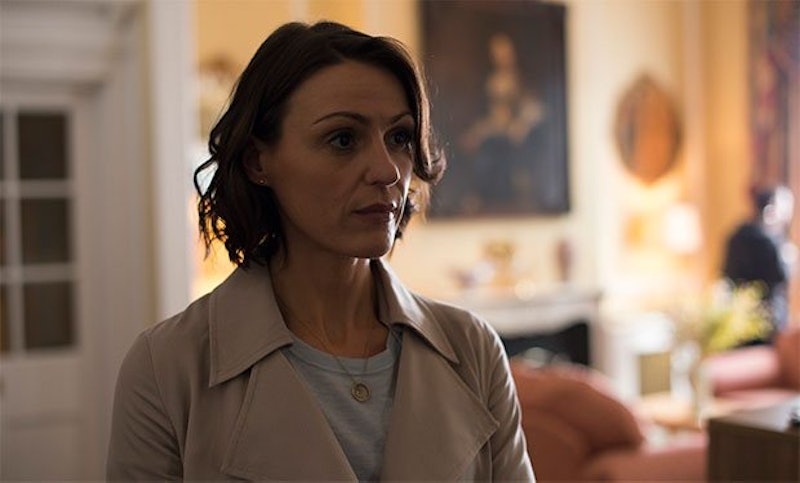 The BBC miniseries Doctor Foster, premiering in the U.S. on Lifetime this Sunday, at first sounds like an all-too-familiar plot. Husband cheats on wife, wife finds out, hell breaks loose. However, this particular version of the story comes with a far-from-standard vengeful twist that may make you wonder if Doctor Foster is based on a true story.

While infidelity may be dishearteningly commonplace, Gemma Foster's far-flung reaction to discovering her husband's affair is anything but. In Doctor Foster, viewers will see her use everything in her arsenal (from threatening her patients to enlisting spies) to suss out her husband's indiscretions. Styled as a good old-fashioned revenge drama, Doctor Foster is a massively popular (we're talking an average of 8.2 million viewers per week) BBC show that is finally heading stateside after premiering in the UK in September 2015. The critically-acclaimed program stars Suranne Jones (whom you may recognize as the personified TARDIS on Doctor Who) in the title role and also features respected British actors Bertie Carvel and Jodie Colmer.

As for any real-life inspiration, the popular new show was created by playwright-turned-screenwriter Mike Bartlett, who revealed that there is a kernel of truth behind Doctor Foster's revenge-fueled melodrama. He told The Daily Express that the series was in part inspired by "what had happened to his friends."

He further elaborated and said to The Daily Express, "Almost any of us have talked to women, and men, who have been through this in our lives. Life is the best research for this. You would be lucky not to have got to your twenties and not experienced a lot of this. I’ve known all sorts of people who have been through things like this and I have drawn on this, but obviously there’s a huge bit of imagination in this. That’s part of the fun." Bartlett also pointed out that it's a universal story that rings true with a large audience. As he put it, "Infidelity cuts so deeply with people. It changes your entire life and your personality when it happens."

But Bartlett had another goal with Doctor Foster: keeping the title character's agency intact. As he explained in the same interview, "I didn’t want to create a woman who is left behind or crying into a mirror. She is always active ... My aim was to keep her empowered and every time you think she is going to give in she steps up and moves forward. She is refusing to let him win."

To find out what results from his careful blending of the painful realism of being cheated on, a "huge bit of imagination," and an empowering main character, check out the U.S. premiere of Doctor Foster on Lifetime, this Sunday at 9 p.m.