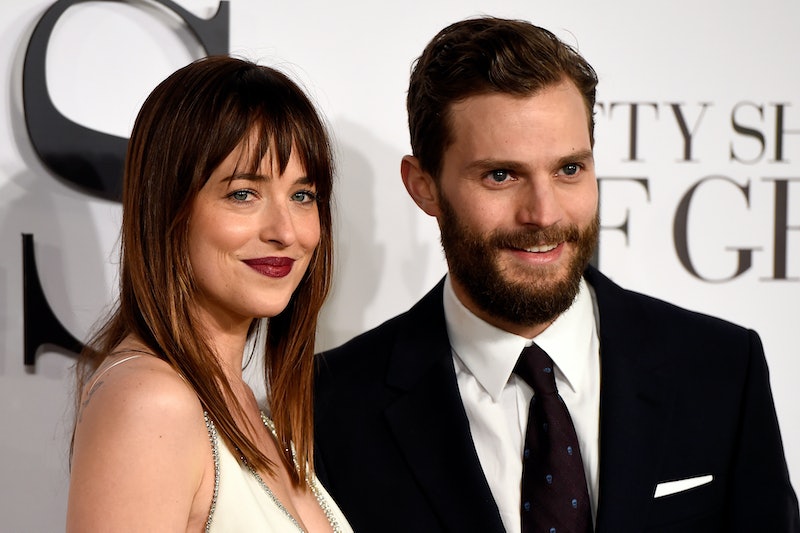 Even before Fifty Shades of Grey was released in early 2015, there were tabloid rumors that the movie's stars, Jamie Dornan and Dakota Johnson didn't like each other. Then, of course, the film came out and was subject to some negative reviews, with much of the criticism stemming from the chemistry (or perceived lack thereof) between Dornan and Johnson. But, do Jamie Dornan and Dakota Johnson get along in real life, or are the rumors coming from an unfortunately truthful place?

In 2015, the movie's director Sam Taylor-Johnson addressed the theories with USA Today just before the film's release. "Everyone likes to gossip. And so many stories are utterly untrue. They're funny and sweet together," she told the paper. "I don't know if everyone expected them to have a Kristen Stewart/Robert Pattinson thing. Jamie is married with a small baby. Dakota is in a relationship. It's a movie. It was work. They get along fine."

For his part, Dornan has repeatedly insisted there are no problems between him and Johnson, so it certainly seems that the rumors pitting the co-stars against each other are just that — rumors. "She's an easy person to get along with. She's sweet," Dornan told USA Today of Johnson. "We instantly had a thing. It's so important, given what we had ahead of us. If we hadn't liked each other, I wouldn't have been cast. I got cast because they thought it worked. Dakota and I get on so well. We're friends now."

Furthermore, when speaking of Johnson to Vogue magazine, Dornan said, "Dakota is very funny — and humor on a film set goes a long way. But, she also had the ability to be a very strong dramatic actress. She’d be telling a joke one minute and breaking your heart on-screen the next — so she was perfect."

Well, wow. That's certainly a high level of praise for someone he allegedly doesn't like. He also told Glamour magazine that he felt "protective" over Johnson when filming the movie's sexual scenes, adding, "I've never had an on-screen relationship as intense with another actress. We respect and trust each other. We have to be fond of each other for this to work."

Johnson, for her part, hasn't been as outspoken as Dornan, but what she has said seems to at least indicate a level of trust for her co-star, which is encouraging. In that interview with Glamour she talked about the movie's vulnerable sex scenes, saying, "It was a very closed set — my mom told me that it's my right to ask for that during intimate scenes, so it seemed like [Dornan, Taylor-Johnson, and I] were in this little world together." As Bustle writer Maitri Mehta pointed out, "You would definitely not want to be alone in a little world with someone you couldn't stand."

So, the official word (and they're sticking to it) is that these two actually are seemingly quite fond of each other. Of course, their on-screen chemistry is certainly up for viewers and critics to debate, but it seems the two are not engaging in any kind of drama on set, which is fortunate for everyone considering they're going to be seeing a lot more of each other as they continue to film the sequels.