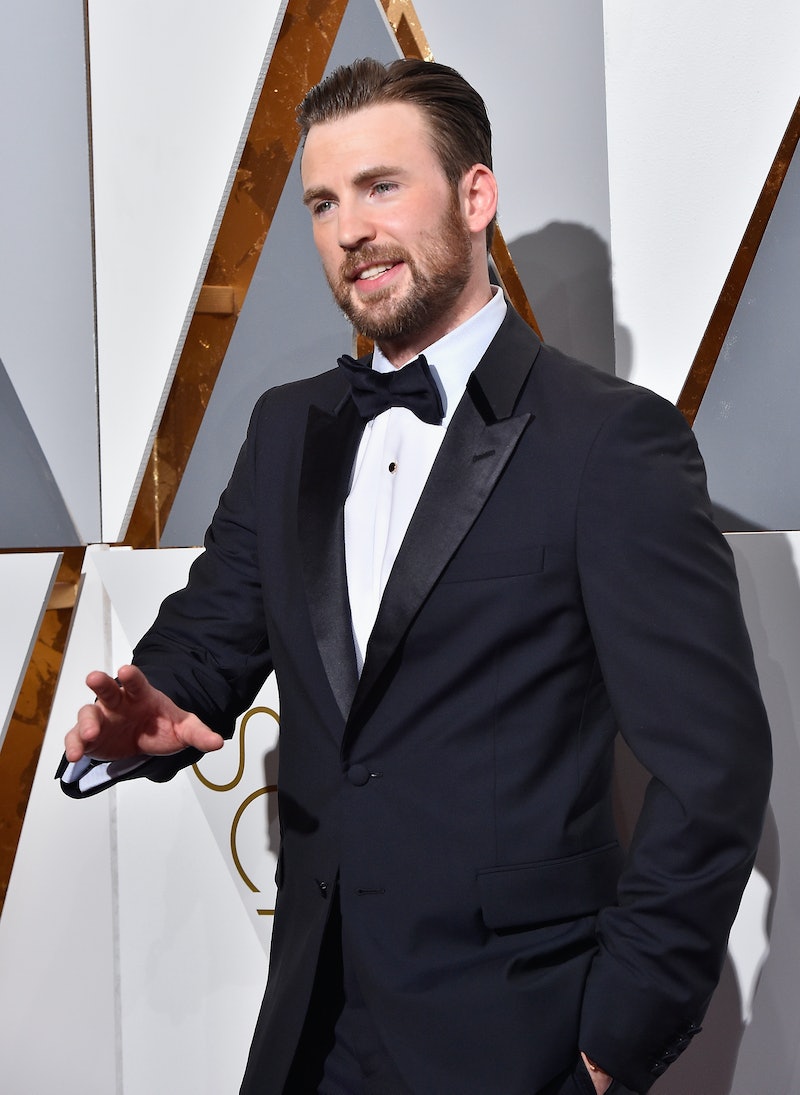 It goes without saying that people want to know who Chris Evans has dated. After all, the 34-year-old star of The Avengers and the forthcoming titular character in Captain America: Civil War has never been married, which means that single ladies across the board are likely trying to do what they can to nab a date with the hot actor. Evans himself has said he's over the partying lifestyle and looking to settle down, but who might he be settling down with? He's been linked to a bevy of beautiful Hollywood actors over the years, so there are no shortage of ladies interested, that's for sure.

I want to get married, though I want children — to me that's the ultimate thing. When you're old and on your death bed, looking back at your life it's not going to be the films you've made or what you've accomplished, it's the relationships you have. You're survived by things that matter — the people you love and those who love you back.

Aw, how cute is he? As his career has blossomed, Evans has been linked to plenty of lovely ladies. Here are all of his rumored romances.

The couple has been on-again/off-again since all the way back to 2007, with rumors that they'd reignited their romance surfacing as recently as January 2016. I may be alone here, but I love the idea of these two together, so I hope they have found love with each other.

This coupling has never been confirmed, but is a rumor that dates all the way back to the year 2000 when the pair starred in a family drama called The Newcomers. Of course, Bosworth went on to marry director Michael Polish in 2013, so she and Evans weren't meant to be.

Long before she was Mrs. Justin Timberlake, Biel was in a long-term relationship with Evans — the actors dated from 2001 to 2006, which is an eternity in Hollywood!

Of course, Bündchen is happily married these days to NFL star Tom Brady, but back in 2006, she was linked to Evans, albeit the rumor itself was seemingly brief because there's not much info about them out there.

This rumored fling allegedly took place in 2007, according to E! News. The two were spotted "making out in front of everyone" at a bar in Hollywood, which fueled romance rumors. At the time, Rossum's rep squashed the reports, saying, "They are just friends." So there you have it.

The only evidence of these two as a possible couple came thanks to this photo of them linking arms after The Metropolitan Museum of Art's Costume Institute Gala in 2007, which obviously led to rumors of the pair dating. Nothing ever seemed to come of it, though, but they do look awfully gorgeous together.

Again, chalk it up to tabloid speculation, but Evans was rumored to be romancing Harris after they were photographed together at the film premiere of Street Kings in 2008.

Guerra and Evans were spotted together one time, and yet the Internet wondered if they were dating. If you ask me, it looks like they literally stopped for a photo on the street and moved on, but what do I know? I've never been to a swanky Hollywood restaurant with a huge movie star.

She's a married mom of three now, but back in 2008, Cavallari was linked to Evans. She shot down rumors to Us Weekly, saying, "I hear that too! No, we're just friends. I've known Chris for awhile, just through mutual friends. I've known him for a few years, actually." Bummer, because I actually think they would have been adorable together!

This one seems to also be based on rumor, except there is video evidence of the two kissing. PopCandies TV caught them on camera in 2011 exchanging a smooch and looking pretty cozy, but neither party ever addressed relationship rumors.

In 2015, it was rumored that Collins and Evans were dating following photos of them together, but Evans refused to admit it either way.

In 2011, onlookers reportedly saw the two acting "very flirty" with each other at a Hollywood club. E! News reported they were "dancing together very closely. It looked like they had a lot of sexual chemistry." LOL.

Of his many rumored flings, this one seems to be partially grounded in truth, especially since they were photographed together on dates numerous times. Although she did star in his directorial debut Before We Go in 2014, so it's entirely possible their meetings were purely business-related.

Evans copped to a major childhood crush on Bullock in an interview with Playboy magazine in 2012, admitting, "I used to be in love with Sandra Bullock when I was growing up. Sandy B. was my girl. I remember seeing Speed when I was in seventh grade and just thinking, That’s her. I can’t say I know her, but from what I’ve heard, she’s fantastic." Maybe he didn't actually know her then, but in 2014 he was spotted with her a few times, sparking romance rumors. According to an anonymous E! News source, "They are not in a relationship, but they are definitely hanging out and are in the early getting-to-know-each-other phase. They haven't put a title on it, but they really like each other." These rumors seemed to fizzle out pretty quickly, though.

A tabloid rumor briefly linked the two actors in 2011, but nothing more was reported, so it's unclear whether they did, in fact, hook up.

The Internet briefly buzzed after Evans and Smart were spotted leaving a London nightclub together in 2010, but that never came to fruition, either.

All of these rumored relationships have me feeling dizzy, quite honestly. Of course, only Evans knows how much of it is fact rather than fiction, but it certainly seems like he's all about having fun — no shame in that!

More like this
Nicola Walker’s IRL Husband Is No Stranger To TV Screens
By Darshita Goyal
Leona Lewis & Husband Dennis Jauch Welcomed Their First Child
By Darshita Goyal
Who Is Camila Cabello Dating? She's Getting Cozy With Lox Club CEO Austin Kevitch
By Radhika Menon
Kim Kardashian & Pete Davidson’s Relationship Timeline From Start To Finish
By Jordyn Tilchen and Bustle Editors
Get Even More From Bustle — Sign Up For The Newsletter