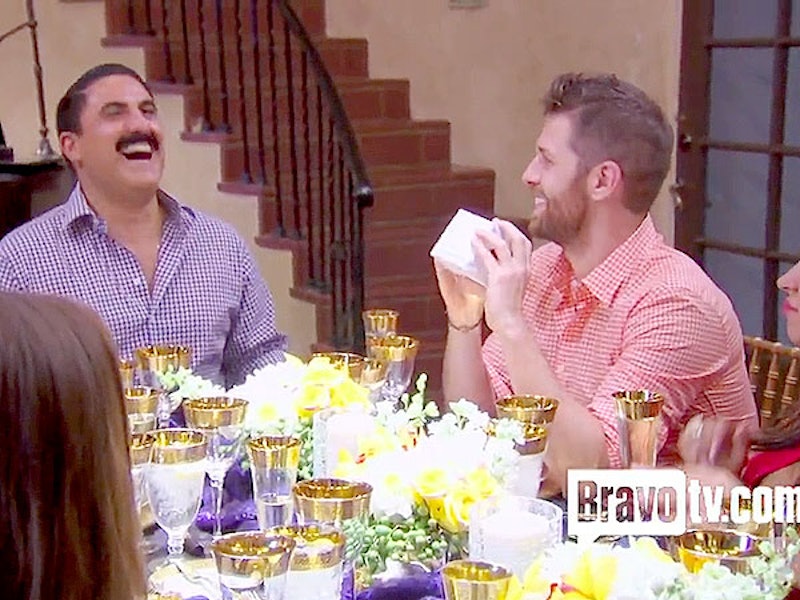 Break out the vending machine caviar, because the Shahs of Sunset Season 3 finale aired Tuesday night. A show this amazing warrants pricey vending machine snacks, trust me. We should treat its finale like it's a big effin' deal. Yes, the ep was glorious, but now that it is over, I am sad. The beautiful season is kaput! I will miss Reza, MJ, GG, Mike, Asa, and Lilly fighting, loving, crying, and cackling on my TV set every week. (The sound of Reza and MJ cackling together is the most wonderful sound on the planet.) The seas ended on a great note, and the cast dynamic might be the best it's been in a while: GG and MJ are on speaking terms, Mike and Reza are getting along with one another once again, and Asa is basking in all of the positive vibes. So why not follow up a successful trip to Turkey with a jaunt down to Palm Springs? And that's exactly what they did.

What about Lilly? Oh, right. Lilly is doing her own Lilly thing. What does that mean? Be patient. I'll get to it.

A Much-Needed Chat Between Friends

Mike and Reza hash out the root of their falling out: real estate. Mike tells Reza he’s not feeling residential real estate and that he plans on sticking with commercial. Reza’s cool with that decision and is not worried about not working together anymore. He just misses their friendship. They hug. THEY’RE BACK. THE BUDDIES ARE BACK.

MJ and GG visit a fertility clinic. GG plans on freezing her eggs, whereas MJ is only there for moral support… initially. After GG’s exam, MJ sets up an appointment. I mean, why not?Well, in a confessional, MJ says that it costs $20,000 to freeze eggs. Is that for real? Or is MJ exaggerating? I know nothing about egg freezing, but $20,000 is a decent chunk of change. MY GOODNESS.

Mike and Jessica go to dinner. “You’re turning 35 next month,” Jessica says. She asks if he wants to get married and have kids ASAP because he’s “getting old.” Rude, Jessica. RUDE. (JK, Jessica is the deal.) She wants a ring and babies now, not five years from now.

In a confessional, Mike says the average Iranian wedding costs a minimum of $500k, so he’s not rushing into it. Gotta save and plan accordingly. Half a million dollars?! MY GOODNESS.

For Reza’s 40th, the crew (minus Lilly) goes to Palm Springs. They stay in a super nice compound. Is it the same compound from the Real Housewives of Beverly Hills Palm Springs vaycay? Maybe? Maybe not? But it does have a similar vibe.

During the trip, the cast goes swimming. Like ya do in Palm Springs. They push each other into the pool. They jump on an inflatable swan. GG drinks two cocktails at a time. UH OH.

Reza steals MJ’s bikini top and tosses it in a tree. The top is retrieved (or should I say it was tree-trieved), MJ throws it at GG, and the metal clasp hits GG’s face. “I HAVE A KNOT ON MY FOREHEAD, BITCH,” GG yells. What seem like the early rumblings of a classic GG/MJ deathmatch become nothing more than friendly spankings and giggles. No fights! Just laughs. WE DID IT!

Mike and Jessica leave the pool party. The cast wonders where they went. Reza knows! “She got inseminated. Nine months from today, there’s going to be a baby in the mix.” Oh, Reza.

Though they have a pretty solid idea as to what Mike and Jessica are up to, the cast barges in on them anyway. Sure enough, Mike is buck naked. There is scrambling for sheets, chaos, and a broken door. WHOOPS. More laughs.

The next night, Reza plans on proposing to Adam. Is Reza nervous? “I’ve eaten up all the TUMS and Rolaids in the greater Palm Springs area,” he says in a confessional.

During Reza's birthday dinner, he excuses himself to use the restroom. He returns with a gift for Adam. Reza nervously chuckles while Adam unwraps the present. It’s a ring! “I love you,” Reza says. “Will you marry me?”

IT’S A GO. THEY’RE ENGAGED. YAAAAAY. The cast freaks out. Reza and Adam kiss. So much joy.

Back in L.A., Lilly hangs out with Coconut. She has food delivered. She eats alone. She gets ready for bed.

“I regret pulling away from the group," Lilly says. "To not have them be a part of my life anymore is definitely sad.”

We don't see Lilly until the very end of the episode. And it's a "Lilly Is All By Herself While The Rest of the Cast Yuks It Up In Palm Springs" scene. All of it might've been too much for me.

In Palm Springs, most of the cast eats delicious-looking birthday cake and talks about friendships. They’re all so happy.

Reza’s overjoyed with where he is at age 40. His thoughts regarding the idiom “You can’t teach a dog new tricks”: “Rover found the bone. And I’m going to keep it, because I earned that fucking bone.”

Preach it, Reza. Preach it.

More like this
What That Ominous 'Selling Sunset' Season 5 Finale Could Mean For Season 6
By Orla Pentelow and Brad Witter
Move Over, 'Sunset'! The Drama-Filled Trailer For 'Selling The OC' Is Here
By Nola Ojomu
Chrishell Stause & G Flip Have “No Rules Or Regulations” In Their Relationship
By Brad Witter
Everything We Could Expect In Gabby & Rachel’s Season Of The Bachelorette
By Kadin Burnett
Get Even More From Bustle — Sign Up For The Newsletter