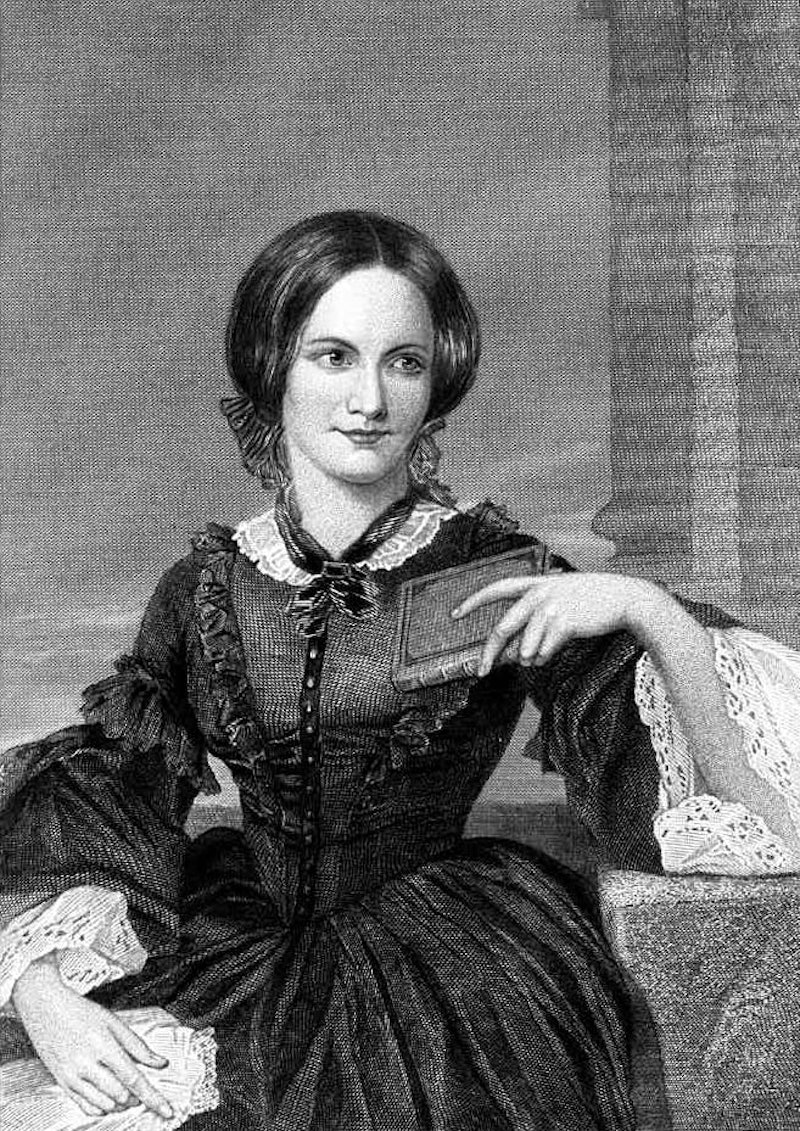 Charlotte Brontë's 200th birthday is coming up on April 21st. And what better way to celebrate than to reveal a bunch of personal facts that she probably wouldn't have wanted us to know? If you're a fan of moody writing and secret attic wives, then you might be interested in these eleven things you never knew about Charlotte Brontë.

I was named after Charlotte Brontë, so it's lucky that I was a huge Jane Eyre fan growing up. My mother read it to me when I was too young to understand repressed desire and the appeal of sexy, brooding assholes. But I still loved the Gothic intensity of the novel. I loved the raw emotion, the windswept moors, the madwoman in the attic, and I loved Jane.

When I read the book myself, years later, it was a very different experience. I had opinions on the postcolonial implications of poor Bertha in the attic, and on that terribly run boarding school, and on Rochester and how he's pretty much a (sexy) jerk. But most of all, I was shocked at how real Jane feels. Two centuries later, her angst and her love and her gritty independence are just as relevant as ever. Jane, like Charlotte, is all roiling emotions hidden underneath a nice girl facade. And Charlotte, like Jane, changed the world of English literature forever.

But who was Charlotte Brontë? She's more than than "one of the two Brontë sisters" (poor Anne Brontë, no one talks about her), and she's more than that female writer from the 1800s who's not Jane Austen. Here are some facts that might give you an idea of the woman behind Jane Eyre:

1. There was a real life “mad woman in the attic.”

Quite a lot of Jane Eyre was based on Charlotte's actual life. And while she herself was never attacked by her employer/boyfriend's insane wife (that we know of), she did visit Norton Conyers in 1839. Norton Conyers was a 16th century mansion with an actual secret staircase leading up to a secret attic room, where a "mad woman" had been confined 60 years before Charlotte visited. Most likely the mad woman was actually epileptic or pregnant out of wedlock. The late 1700s were not a fun time to be alive.

2. Jane Eyre was published under a male pseudonym

Even her publisher had no idea that the author was a woman. Charlotte used the name "Currer Bell," to keep her own initials while obscuring her gender. Novel-writing was not the proper occupation for women at the time, and Jane Eyre was especially controversial, with its fierce female lead. Other pseudonyms she used in her writing include "Lord Charles Albert" and "Florian Wellesley."

Lowood, the horrifying school full of disease and physical abuse in Jane Eyre, was based on the Clergy Daughters' School at Cowan Bridge, Lancashire. Jane attended with three of her sisters, and it was just as bad as described. The cruel Mr. Brocklehurst was based on the very real Reverend Wilson, who threatened to sue over libel. Charlotte smoothed things over with an apology letter... but if you read about a horribly abusive school master and think "gosh that must be me," then maybe you're the problem?

4. ...and the character Helen was based on her own sisters.

Remember Helen? Jane's one friend at school who dies tragically after the school neglects her and she gets sick? Well, the two oldest Brontë sisters, Mary and Elizabeth, both contracted tuberculosis at school and were sent home, where they soon died. They were both under 12 years old. It's no wonder Charlotte had negative feelings about boarding school.

Charlotte was proposed to by three different men , all of them churchmen. One man met her one time at tea and subsequently proposed (she said no). Another was a stuffy clergyman and the brother of her good friend, so at least he knew her somewhat before he proposed (she said no). The third was her father's curate, who'd been in love with her for years (her father said no). But the last guy, Arthur Bell Nicholls, continued seeing Charlotte in secret until her father finally gave up and Charlotte said yes to his proposal. So it's a happy ending, if you forget that she died a year into their marriage.

6. Her first paychecks from Jane Eyre went to the dentist.

Charlotte's friend Elizabeth Gaskill once described her as: "underdeveloped, thin and more than half a head shorter than I ... [with] a reddish face, large mouth and many teeth gone; altogether plain." So the dentist was probably a smart move.

7. She prevented her sisters books from being published.

...but it was only because she loved Wuthering Heights so much that she prevented her sister Emily's unfinished, second novel from being published after her death. Charlotte was worried that an inferior second book would ruin Emily's reputation. She also suppressed the re-publishing of her sister Anne's novel after Anne's death. But that was probably just because she really didn't like it. Look, no sister is perfect.

8. She died of morning sickness.

Charlotte had only been married for nine months before she died of extreme morning sickness (i.e. constant vomiting) while pregnant with her first child. At least, that's one theory; she might have also had typhus or tuberculosis. All of the Brontë siblings died young: Charlotte outlived them all by dying at 38.

9. Love triangles followed her around.

In Jane Eyre, Jane walks out on Rochester rather than be the other woman. In real life... well, Charlotte was in love with her married teacher, but he tore up her love letters. Her brother Branwell had an affair with his boss's wife. Charlotte also dedicated Jane Eyre to William Makepeace Thackeray, her literary hero. Unfortunately, unknown to her, his wife had just been declared insane, so a lot of readers assumed that "Currer Bell" was having an affair with Thackeray... since that's pretty much the plot of Jane Eyre.

10. Charlotte wanted to be a painter.

Her original ambition was not writing but art. She actually had a couple of sketches exhibited, and her publishers wanted her to illustrate the second edition of Jane Eyre. She had this to say in response: “I have, in my day, wasted a certain quantity of Bristol board and drawing-paper, crayons and cakes of colour, but when I examine the contents of my portfolio now, it seems as if during the years it has been lying closed some fairy has changed what I once thought sterling coin into dry leaves, and I feel much inclined to consign the whole collection of drawings to the fire.”

11. She and her siblings started writing as children.

The Brontë sisters and their brother spent most of their childhoods crafting intricate fantasy worlds. There was the Glass Town Federation, the kingdom of Angria, and the world of Gondal, full of toy soldiers and torrid romances. The children filled journals with detailed maps, stories, and lists of names. Their later writing wasn't quite so fantastical, but Charlotte, Emily, and Anne were all authors from the start.