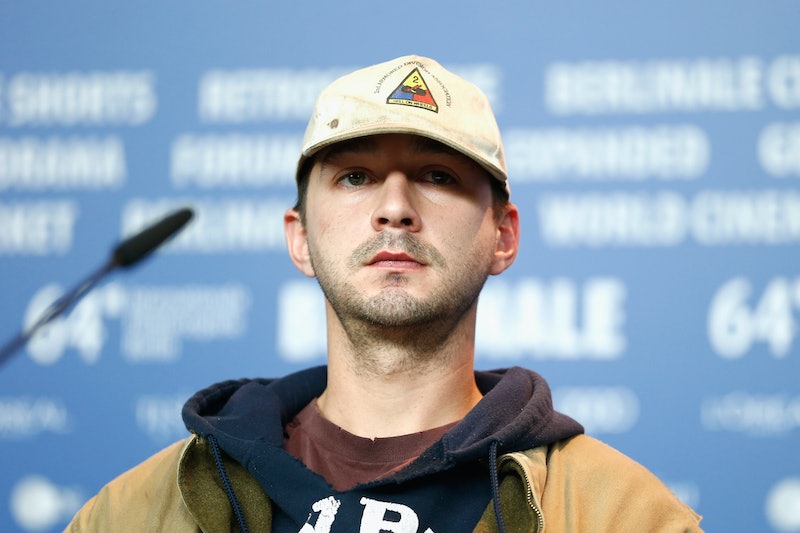 Shia LaBeouf is over not being famous. Since the former Disney star (and by former, we mean former) just loves a "performance art" stunt these days, he's found a new way to... express himself. After walking down the red carpet with a bag over his head that said "I AM NOT FAMOUS ANYMORE," which was the same phrase that LaBeouf has been tweeting every day for over a month, and giving out an unintelligible answer about seagulls when asked a question at a press conference in Berlin, he found a new way to communicate with us/devalue true performance art. On Tuesday, LaBeouf tweeted a new phrase, "#IAMSORRY," which, lo and behold, was a teaser of his new "art installation" that really just sounds like a cross between a weird garage sale and a daycare center.

LaBeouf's new exhibit, entitled "#IAMSORRY" opened at the Cohen Gallery in Los Angeles, and runs through Feb. 16, if you're so inclined. The gallery described the actor's installation as: "Shia LaBeouf is sorry. Sincerely sorry. He will be in situ at 7354 Beverly Boulevard for the duration. Implements will be provided. Free admission."

The "implements" reportedly include a pink ukulele, a whip, chocolate, a wrench, a "bowl of tweets," a bottle of Jack Daniels whiskey and a flower. So basically, one by one, guests choose an "implement" and go into a room where LaBeouf is sitting with a bag over his head that actually states: "Does my head look big in this?" It's their job to try and "distract" him with the object, since LaBeouf stays silent underneath the bag.

This all just sounds like a kinky game of Clue to me, or what you do to a fussy baby when you're trying to feed them and have to stoop to "airplane-noises-with-your-spoon" tactics, but I digress. However, some people who went said that he reportedly lifted the bag to cry, and one person said he even laughed.

One lucky lady even got a smile:

So LaBeouf may be sorry — but not that sorry.