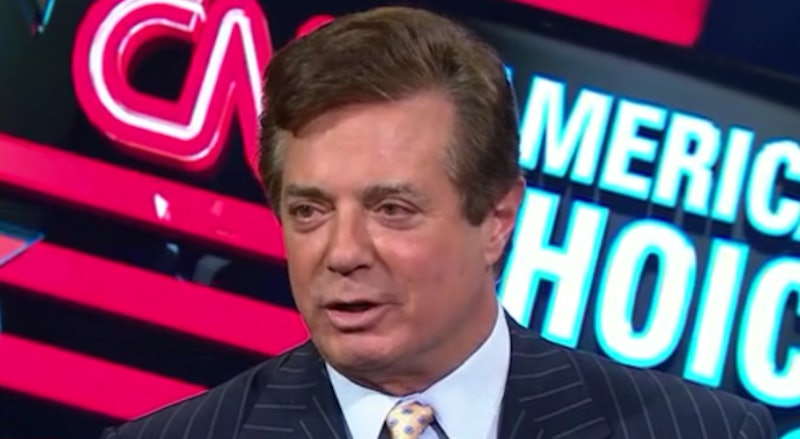 On Thursday, one of the most reliably combative and unapologetic political organization in recent memory gave everyone a little signal that maybe, just maybe, they were getting a little concerned. I'm talking, of course, about the Donald J. Trump for President campaign, which finally seems to be hitting a rough patch after months of defying expectations and confounding its critics. So, how can you tell they're starting to sweat a contested convention scenario in July? Because Trump hired Paul Manafort as a campaign manager, and there's one very particular type of political warfare he's known for.

But who is he, and why does this matter? Manafort, 67, has been a lobbyist and political consultant for decades, and his firms have provided support and advice to some pretty peculiar clients outside of the United States. As Catherine Ho of the Washington Post detailed on Thursday, Manafort notably worked for former Ukrainian president Viktor Yanukovych in the run-up to the 2014 public uprising and parliament vote that ended his reign, as well as the late Bahamanian prime minister Lynden Pindling, who was dogged by his own share of controversial allegations.

But what he's most prominently known for stateside, without a doubt, is his role in the 1976 Republican National Convention. And that's why his hiring makes it clear that Team Trump is feeling the heat.

Back in 1976, the Republican Party was facing a situation that resembled what's happening now in 2016, even though the candidates involved were, in retrospect, lightyears more sober-minded, moderate, and serious than what we've now got with Trump and Cruz ― it was the incumbent (yet unelected) President Gerald Ford fending off a primary challenge from Ronald Reagan, who'd just ended his tenure as Governor of California a year prior.

Having ascended to the presidency after Richard Nixon's resignation in 1974, and having pardoned Nixon in what was a deeply unpopular decision with large portions of the American electorate, Reagan figured that the relatively moderate Ford was ripe for a primary challenge, and set about trying to nab the nomination for himself. At that time, Manafort was still a young man and was tasked with making sure that Ford's delegates didn't defect from his side, a job he by all accounts accomplished to great success.

That's the part of Manifort's biography, above all else, that the Trump campaign was probably looking at when he signed on, because boy, do they need to turn things around in the delegate chase right now. Beyond even the question of whether Trump can win a majority of the delegates from here on out, he could face a convention scenario in which his delegates become unbound on a second ballot, and might want or try to abandon him.

It's the kind of nitty-gritty, experiential know-how to avoid that scenario, and lock in a winning margin, that the campaign is hoping to get out of Manafort. And it shows that for all the bravado Trump in particular has expressed throughout the primary, there's been some kind of internal concession that the team they had in place before wasn't quite enough. According to Manafort himself, he "work[s] directly for the boss," which is also a notable point of distinction ― the only person previously thought to have a direct line to Trump and oversight on campaign matters was embattled campaign manager Corey Lewandowski, who is still on the campaign.