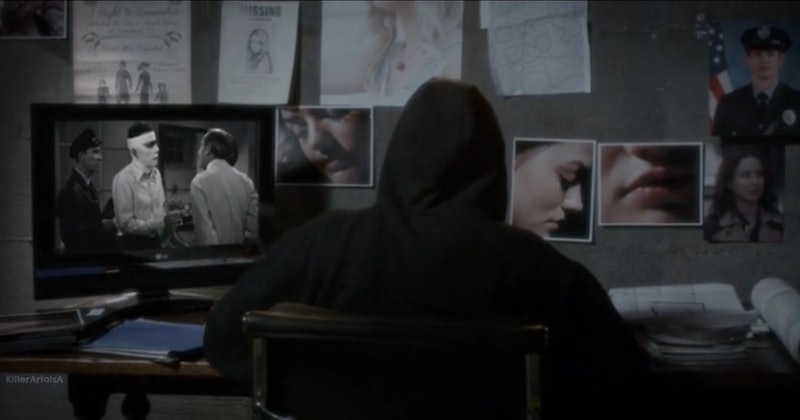 You never know who the black hoodie you see in Pretty Little Liars is anymore, considering most of the cast has worn them already. PLL costume designer Mandi Line told ET Online in 2013 that there were a grand total of twenty-six black hoodies made to fit each cast member. That was three years ago betweens season three and four. Since then, the unveiling of Shana Fring, Cece Drake also known as Charlotte DiLaurentis, and Toby Cavanaugh has shocked Pretty Little Liars fans to their core and, I'm sure, saved Line quite a pretty little penny on wardrobe!

There's something ominous about a black hoodie, but singularly also stylish. I, personally, always feel the most comfortable in black and hoodies, so perhaps I'm a bit biased in this regard. For the cast of PLL, the hoodie represents "A" and the danger that the characters face. The choice to make such a simple piece of clothing so indestructible, versatile, and symbolic on the show is kind of genius. It has also sparked an array of easy-to-replicate, as well as sell, merchandise!

However, not everyone suits the black hoodie equally when they don it on the show. Here are the cast members who've donned a black hoodie, ranked from worst to best.

Let's just say it: Lucas Gottesman is the worst black hoodie. Maybe it's because he has no chill?

Oh, so this is why Aria never wears black hoodies on the show.

Shana died in this hoodie, so it made her look kind of morbid.

Alison just doesn't seem to have the face for hoodies, although maybe she looks better in red.

Noel has amazing eyes and bone structure, but that hoodie looks a size too small on him. You can't be A if people can see your face, Noel!

Paige has the facial shape and deep set large eyes that make her look mysterious and beautiful. Good job, Em!

Caleb and Paige make quite the pair! Their bone structure was made for the black hoodies. However, these two shots were alternate season three "A" endings and they eventually went with Toby Cavanaugh. Even the actors didn't know who the producers were going to pick!

That long blonde hair kind of gives you away, you know?

The whole "crazy for days after thinking the love of your life has died" can kind of make a girl rock the black hoodie and dark liner look?

It's like Toby was made for hoodies! Plus, he was always the mysterious one anyway, so the costuming choice and plot twist made sense to me.

Mona was always the best at "A" games, anyway. Plus, her dark eyes and hair and bold makeup ensure that she looks fantastic under cover of darkness and black hoodies.