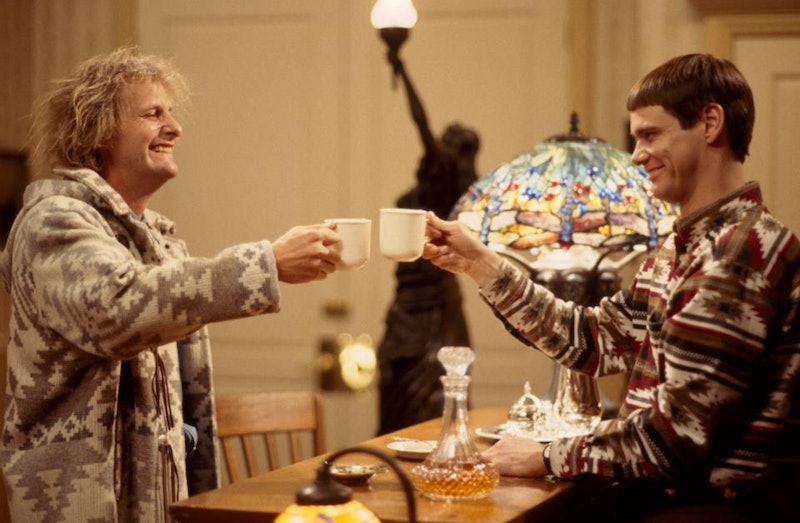 As time moves on, movie fans tend to remember the best films of an era, including the '90s. But for every Oscar-winning epic, Hollywood releases just as many mindless flicks and flops that you can't help but love anyway. I'm sure that there were plenty of dumb '90s movies you couldn't stop watching as a kid, because although the era also produced The English Patient, Shakespeare in Love, Saving Private Ryan, Babe and more, there were also many, many movies that are supremely watchable, but not all that Oscar-worthy, that we all loved.

You may even re-watch a bunch of these '90s movies today, no matter the quality. In 2014, The Atlantic reported on a study about why people like to re-watch movies they've already seen before. "Reengaging with the same object, even just once, allows a reworking of experiences as consumers consider their own particular enjoyments and understandings of choices they have made," said the study by Cristel Antonia Russell and Sidney Levy. Basically, re-watching even the dumbest '90s movies can help you realize just how far you've come.

Here are some of the best, loveably dumb '90s movies you probably had on repeat as a kid.

Brendan Fraser plays a skateboarding California caveman who emerged from a post-earthquake block of ice in this 1992 comedy. Looking back, the block sounds insane, but as a kid, I went through a phase where I only wanted to watch this movie.

Totally dumb or totally classic? It's hard to tell, but I think the Jim Carrey-Jeff Daniels movie definitely cornered the market on dumb comedies in 1994 — and again in the movie's 2014 sequel.

This 1994 comedy introduced the big screen to Carrey's butt-talking, and for that, we should always be thankful. It's stupid hilarious.

What would happen if you put Pauly Shore and a Baldwin in a dome? 1996 gave us that answer in the form of this Shore-era dumb comedy, just because. And it's so watchable.

NBA superstar Shaquille O'Neal kicked off his acting career as a genie that emerges from a boombox. It doesn't get more '90s than that.

The ultimate teen fulfillment comedy is right here. Christina Applegate plays a rebellious teen who steps up to take care of her family when their appointed babysitter croaks. She gets a fashion designing job, fights off the romantic advances of a creep played by David Duchnovy (pre-X-Files), and suddenly — dare I say it? — grows up. The movie also features a pre-Good Wife Josh Charles, and his boyish charm in this movie alone is so worth multiple viewings.

Before Sarah Michelle Gellar stepped into the slayer's shoes on TV, Joss Whedon introduced the world to Buffy in this 1992 horror comedy about a Valley girl cheerleader who is appointed the one to fight vampires. The TV series is way better, but it's fun to watch this weirdly campy version of the heroine we've all come to love today.

This 1997 movie about a giant snake spawned so many sequels and the Lake Placid franchise. It has a B-movie plot (giant snake!) with a very A-list cast — among the stars of the original film are Jennifer Lopez, Jon Voight, Owen Wilson, Eric Stoltz, Danny Trejo, and Ice Cube.

It's a cooking movie with a dancing crab and literal floating on the ceiling as a symbol for falling in love. Sure, it's not Sarah Michelle Gellar's best movie, but eclairs are a main plot point, and did I mention the dancing crab? The rom-com easily stole my heart — and made me crave eclairs — during multiple viewings as a teenager.

10. Teenage Mutant Ninja Turtles II: The Secret Of The Ooze

I don't know what it is about TMNT, but these giant turtles have captivated audiences — including myself — for decades. Giant crime-fighting turtles who love pizza and have a rat master. It's not a recipe for an art house Oscar winner, but it's definitely a watchable formula.

Before musicians decided documentary concert movies were the way to go, Hollywood wanted to get celebs on the big screen starring in actual narrative films. And Spice World is one of those films, cashing in on the Spice mania of the '90s. The gang's all here for a dizzying and super weird adventure around the UK, and come on, who didn't burn out their copy?

What happens when you put Arnold Schwarzenegger in a totally meta action movie filled with cliches? This 1993 comedy, which is a little confusing but a lot of fun.

Jim Varney's iconic character goes to jail in this 1990 comedy which sees Ernest go on various adventures — including the big house.

After an awesome string of hit summer movies, Will Smith starred in this meh 1999 Western, but it still gets repeat watches because Smith's charm is undeniable.

One of Hollywood's worst-best sequel movies ever made, this movie doesn't even have trolls in it. There's even a documentary called Best Worst Movie about how bad-good this movie is.

The most genius thing about the movies based on the classic sitcom is that Hollywood left the Bradys in the original time and brought them to the '90s. Hilarity ensues and I can't stop watching, even now. They're just so funny.

Jim Carrey has done a lot of awesomely bad-but-good '90s movies, including this 1996 black comedy, which was directed by Ben Stiller and produced by none other than Judd Apatow.

Here's another starring vehicle for a musician, this time a 1991 movie made solely to showcase rapper Vanilla Ice at the height of his popularity.

Johnny Depp as a 1950s rebel? Why not. He takes on the role as "Cry-Baby" Walker in this 1990 John Waters throwback that's like Grease, but with a '90s heartthrob.

Meryl Streep can do no wrong. She's even a delight in this bizarre but fun Robert Zemeckis movie that finds her fighting over eternal youth with Goldie Hawn.

Can a California skater survive winter? This 1993 comedy-drama strives to provide the answer to such a '90s dilemma with a cast that includes Seth Green and Jack Black.

Before Charlie Sheen became known for Two and a Half Men, he starred in this 1993 spoof comedy that's filled with hilarious moments no matter when you tune in.

An unknown Jennifer Aniston helps fight a leprechaun in this 1993 horror comedy about, well, fighting off an evil leprechaun. The film has spawned many sequels and a year later, Aniston found fame on Friends.

Turning video games into movies was such a '90s thing. With Super Mario being all the rage on Nintendo systems everywhere, naturally everyone's favorite plumber hit the big screen. But this movie looks nothing like the game you and I know and love. It's just really weird, yet at the same time comforting.

This 1990 movie is notable for being the very first evidence of the magical chemistry between Meg Ryan and Tom Hanks. Sure, the movie is really insane — Hanks' Joe thinks he's going to die and Ryan plays three different characters — but this is proof that those two stars can make any plot watchable.

Clearly, the '90s were a breeding ground for some of the strangest, silliest movies ever made.